Baseball snags first win since 2020 in doubleheader against Coast Guard 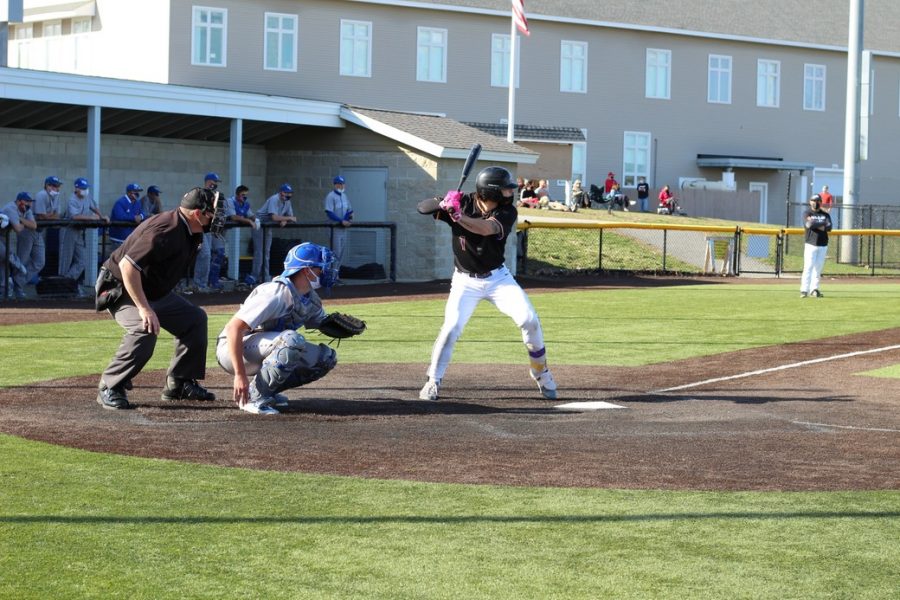 Junior Quinton Copeland at bat for the Lions.

The baseball team secured its first conference win of the year—and first win since the abridged 2020 season—on Saturday against the United States Coast Guard Academy.

Following two defeats against Wheaton College last Saturday, the Lions rallied to win the first game of their home-field doubleheader 14-8. Though they lost the second game 15-7, the victory saw a powerful offensive showing, with twelve of the fourteen runs scored in just two innings.

“Our offense did what it needed to do,” head coach Nicholas Vennochi said in a postgame press conference. “That’s how we’re going to have to win games, that’s how it is in this conference—people put up big numbers.”

Sophomore Thai Morgan put the first run on the board with a solo home run in the bottom of the first inning against the Bears’ starting pitcher P.J. Gravalec.

Pitcher A.J. Ortega, a sophomore, kept the Bears shut out into the third inning, allowing the Lions to cement their lead with a quick succession of runs.

Senior Ryan McCahan reached second base on an error, allowing junior Quinton Copeland to score. McCahan was brought home by a line drive from Jacey, and a three-run homer from junior Joe Colucci put Emerson seven runs ahead of the away team.

Emerson’s lead started to slip away in the fourth inning when Coast Guard responded with four runs, including a two-run home run, off of Ortega. Cody Fidler hit a second two-run homer for the Bears in the fifth inning, and Ortega was relieved by first-year Benny Guevara in the sixth. A solo shot by Blake Carroll in the seventh evened the score at 7-7.

Junior pitcher Bryan Simmons-Hayes came in for the Lions at the top of the eighth, and conceded another run. Justin Stasiak batted in John Tacchini, putting Coast Guard ahead with only an inning to go.

Coming from behind, Emerson’s offense set off a frenetic eighth inning. Facing Coast Guard reliever Mark Stutts, the Lions quickly regained the lead with three runs off of two pitches, with an RBI single and two-run home run from Morgan and Copeland, respectively. Sophomore Matt Nachamie and junior Louie Davolio both batted in two runners each.

Simmons-Hayes closed out the top of the ninth inning with the scoreboard at 14-8, clinching the win for Emerson.

Saturday’s game marks Emerson baseball’s first victory in over a year, since its 9-8 win over Lasell University on March 11, 2020—the last game before the 2019-20 baseball season was cancelled due to the COVID-19 pandemic.

It is also the first time Emerson has scored upwards of ten runs in a single game since a 15-4 exhibition game against Penn State New Kensington on March 4, 2019.

Vennochi applauded his team’s aggression while at bat, which propelled the Lions to their win.

“We can swing it,” Vennochi said. “We have a tough lineup, up and down. These guys take good at-bats, and they’re aggressive.”

He noted the standout performances of players like Morgan, who was named to the New England Women’s and Men’s Athletic Conference’s Weekly Honor Roll last week after recording a three-run home run and leading the team in RBIs against Wheaton. Vennochi said the results, particularly in the first game, were the outcome of a concerted approach to aggressive at-bats.

“We’re definitely trying to be aggressive on fastballs, that’s clear,” he said. “That’s not new, that’s not a secret. We just have a lot of guys who can swing, and that’s what we’re trying to build this team around—our offense.”

The second game of the doubleheader was the inverse of the first: Coast Guard built an early five-run lead in the first inning, off Emerson starter Johnny Maffei.

“It’s really easy to get frustrated when you don’t do well and take yourself out of the game—even if you’re out of the game,” Vennochi said of his second game’s starter. “Not be a good teammate, kind of take a walk, make it about yourself. John didn’t do that. If he struggles, he always takes it and tries to be better.”

The Lions go on to play at Clark University—who most recently lost twice against Coast Guard—on April 3.