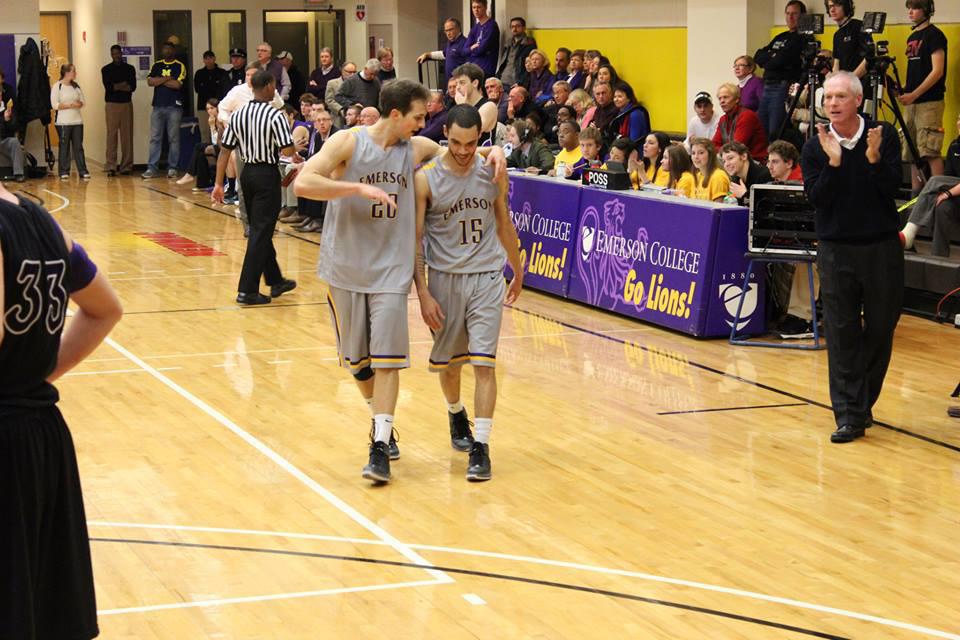 Feb. 6, 2014 — Nearly two months after upsetting the number one team in the country, the unranked Emerson Lions basketball team was matched up on the road against the third nationally ranked Engineers of Worcester Polytechnic Institute, a squad they had lost to just four games earlier.

Down 11-9 early, starting guard Jon Goldberg fought through contact to tie the game on a layup, and then took the lead on the one-and-one. Less than a minute later the senior did it again and stretched the lead out to six. After making the free throw, Goldberg hurried over to the sideline with a bloody nose that was later diagnosed a fracture.

“He’s bleeding all over the place and going ‘I’m fine, I’m fine,’” Bill Curley, the associate head coach in 2014, said. “He said ‘I’m playing.’ He didn’t even second guess it and played the rest of the game with a broken nose.”

A few ticks later and with tissues in his nostrils, Goldberg was back out on the hardwood and played the rest of the contest, later knocking down two clutch free throws with three seconds left to put the game out of reach. Emerson won 71-67.

“When anybody ever asks me about the legend of Jon Goldberg, I tell them about that game,” teammate Eli Kell-Abrams ‘15 said.

Fast forward to the 2015-16 season. Goldberg, now 25, is in his second year as graduate assistant coach for women’s basketball at the Division I University of Tennessee at Chattanooga, while getting his master’s degree in health and human performance. He said his duties include everything from working with individual players during practice, to ordering busses and booking hotels, to sweeping the court and doing laundry.

“I will do anything to help the team win,” Goldberg said. “I will never be too big for anything.”

Goldberg said he has always had a passion for coaching, and decided before his senior year, after his season leading an AAU team was over, that he would pursue it.

Originally from Stowe, Vermont, Goldberg began college at St. Lawrence University in Canton, New York pursuing a degree in economics and playing basketball. After two years he said he realized the career field wasn’t for him.

“I thought sports psychology would be great, so I transferred to Emerson,” Goldberg said. “They didn’t have psychology but they had communication, so I thought that was perfect.”

After his junior year with the Lions, Goldberg averaged almost a double-double per game, and accomplished this feat in eight games during his senior season. The two-year captain scored 12 points and 9.5 rebounds in 36 minutes per contest, and played the entirety of 10 games.

“He stayed in the gym and took extra shots and watched extra video, and put the commitment in and really took off,” Curley, now the Lions’ head coach, said. “He would stay after practice and draw the plays up on the board for the guys that weren’t picking it up.”

What plagued Goldberg was his selflessness, according to Curley, who said the player never hesitated to pass, but eventually realized how his shooting ability could help his fellow Lions score points.

“He had a lot of one-on-one situations where guys weren’t double-teaming him because he passed so much,” Curley said. “Once he started realizing [that], ‘Okay I can take this one guy and then [by] getting double-teamed and triple-teamed, it’ll create better opportunities for my teammates.’”

After the season was over, Goldberg earned multiple awards, including New England Women’s and Men’s Athletic Conference First Team All-Conference, Academic All-Conference, and Emerson’s Student-Athlete of the Year.

“His legacy is the legacy of the perfect student-athlete,” Kell-Abrams, graduate assistant coach at the University of Miami (FL), said. “You get a guy who is as selfless as it comes, a great team captain, and then you get a guy who is a 4.0 student. He goes to every class, he puts as much on the court as he does in the classroom. He is what people should strive to be.”