Bats out of hell — softball piles it on against Anna Maria 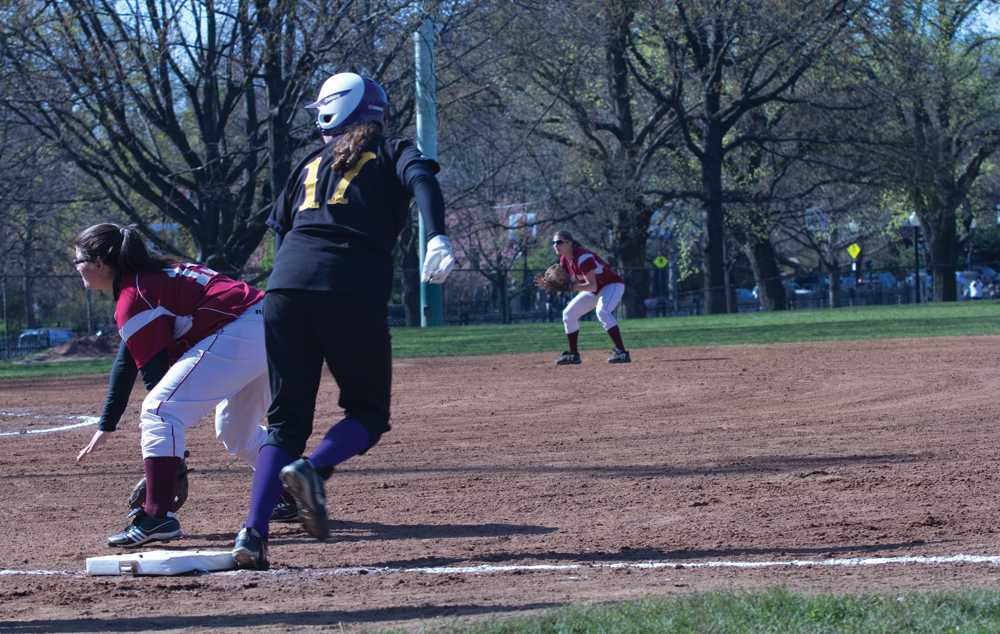 Emerson softball’s Alex Magistro stood at the plate during the first inning of the second game of a doubleheader against Anna Maria, a perfect game already in her pocket. The pitcher had tossed five flawless innings in the Lions’ 10-0 victory in the first game, but it was in the batter’s box that she has been most motivated this season.

“I tend to be a headcase. I started singing in my head and breathing just to calm myself down” Magistro said, describing her habits while at bat. “I’ve started humming now, so I’m sure the catchers think I have a screw loose.”

Whatever routine she performed during thit particular at bat, it worked. Magistro got a hold of a pitch from the AmCats’ Melissa Stedman and sent it shooting between two outfielders until it dropped near the wall at deep left center. The sophomore galloped around the bases and made it to home in plenty of time. The two-run homer was part of a 10-run inning for Emerson, who would go on to trounce Anna Maria yet again, this time by a score of 16-0.

The games were played on Boston Common, and the day proved to be a walk in the park for Emerson, both figuratively and literally.

The idea to play on the Common came from head coach Phil McElroy. McElroy said the Lions played there when he first joined Emerson in 2000, and that the venue change would help the positive attitude the team has kept so far this season.

“We’ve been a lot looser this year. We have a little bit of a team slogan, ‘Team Bring It,’” he said. “We wanted to bring not only a little more energy to every game, but also a little more fun. We don’t plan on playing here very often, but it was nice to get out here today.”

With Rotch Field a 20-minute walk from Emerson, many students took advantage of the short stroll across the street to come out and support their team.

“It was awesome,” said shortstop Shannon Torosian. “We wish we could have that type of fan base every game.”

Magistro, who said she had thrown a perfect game before in high school, said she did not even realize she had one going until after the game.

“I honestly didn’t even think about it until we left the field and they threw the ball to me and said ‘here’s a perfect game,’ ” the sophomore said.

At the plate, it was a team effort. Torosian opened the floodgates in the first inning of the first game with an RBI single, and the Lions would bat around and put up eight more runs.

Alicia Danielle took the mound in the second game of the twin bill and picked up where Magistro left off. Danielle carried her own perfect game into the fifth, before an Elizabeth Clark single gave the AmCats their first and only base runner of the day. Danielle added a home run of her own to compliment her immaculate pitching line.

“This weekend, we definitely tried to get [our hitting] back to where it was, because it took a dip,” said Magistro, who is hitting .312 with 4 homers and 24 RBIs. “Today, we pulled some hits out of our pockets and did really well. I think it’s something that will carry back into our season.”

The Common presented different challenges for hitters — Kelsey Tuthill was twice limited to a double when a ball she pulled to left rolled down a hill — but Anna Maria’ batters would have seemed hapless in any venue against Magistro. The sophomore windmilled her way through the lineup, striking out eight. The efficient pitcher finished the first game in under an hour.

The blowouts were a welcome change to the extra inning nail-biters that the Lions have been playing this season, McElroy said.

“I didn’t have a heart attack today like I usually do,” the coach said. “I think it goes back to how loose the team is and how they’re comfortable in those situations. They know they’re good enough to win, and they’re playing that way.”

Emerson went back to Rotch Saturday and swept Rivier before going on the road and dominating Emmanuel Sunday. Except for a close 4-3 win against the Raiders, the bats stayed hot and the Lions scored 69 runs overall on the weekend in their six games. Emerson improved to 19-2 in conference play and currently stands at second overall in the Great Northeast Athletic Conference, behind Saint Joseph’s of Maine. As the regular season nears its end and the team prepares for the playoffs, McElroy said that it will be important to keep up the strong hitting.

“We have three hitters that are over .400, and then everybody else is under .250,” he said. “In order to win a conference championship and go back to the NCAAs, we have to a better job hitting.”