Beacon Breakdown: What happens when someone on campus experiences an opioid overdose? 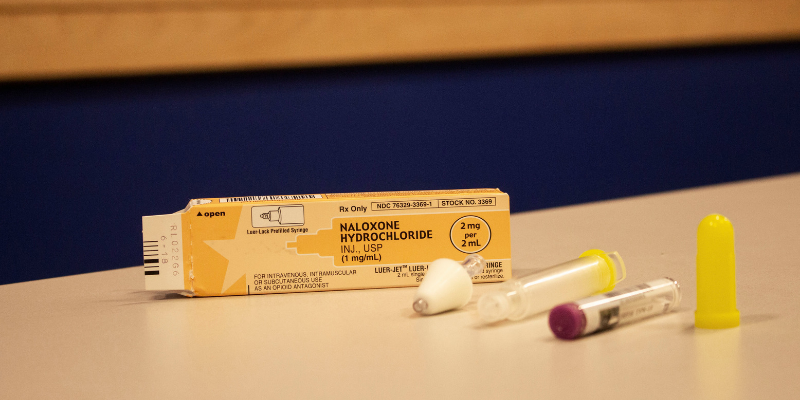 The college purchased Narcan for each building and the Health and Wellness Center at $91 a unit. Emily Oliver / Beacon Staff

College campuses around the country started taking the initiative to obtain Narcan, a nasal spray used to counteract the effects of an opioid overdose, in 2016, according to a National Public Radio article. Emerson followed and purchased Narcan for the Health and Wellness Center and campus buildings in 2017.

Opioid overdoses contribute to one out of every five deaths among young adults, 24 to 35-year-olds, in the United States, according to a study conducted by St. Michael’s Hospital in Toronto. The most commonly used opioid among college students is prescription painkillers, according to the Delphi Behavioral Health Group.

Narcan binds to the receptors that attract opioids in the brain and can reverse and block the effects of the opioids, according to the National Institute of Drug Abuse.

The Berkeley Beacon wondered how the college would handle an on-campus opioid overdose.

Why did the college purchase Narcan?

The college purchased Naloxone HCI, commonly referred to as Narcan, through Bound Tree, a medical supply company, two years ago at $91 for each individual unit, Emerson College Police Department Deputy Chief Eric Schiazza said in an interview. Schiazza was not able to disclose the number of units the college purchased, but there are eight college buildings.

After Narcan is administered, the individual will be transported to the hospital for further medical treatment, Schiazza said.

Has the college ever needed to administer Narcan?

ECPD responded to two overdose incidents with individuals outside of the Emerson community. One incident occurred in the summer of 2015 and the other in 2016, Schiazza said.

ECPD performed CPR on the individuals until the Boston Emergency Medical Service arrived and administered the Narcan, Schiazza said.

“While the chance of a student overdosing [on opioids] is rare, we are proud to have implemented Narcan on campus,” Smith said. “It’s a terrible epidemic, and we want to make sure the Emerson community is safe.”

As of January 2019, the college has never needed to administer Narcan to an Emerson community member, Smith said.

Where is Narcan on-campus and who can administer it?

All college buildings contain Narcan, however, ECPD is not permitted to disclose the specific locations. Narcan must be kept at a temperature of around 55 degrees Fahrenheit, and if it goes anywhere above 80 degrees it loses potency, according to Smith. ECPD has to make sure the Narcan stays within its designated locations.

Narcan is part of an emergency kit in every college building. For safety reasons, only ECPD officers and Center for Health and Wellness staff members are permitted to administer Narcan, Smith said.

“Narcan works almost immediately, and when people overdosing wake up, they can often be violent,” Schiazza said. “We don’t want students to be put in that dangerous situation.”

Narcan requires no medical training, according to the Narcan website. However, Smith and Schiazza said ECPD and the Center for Health and Wellness staff must complete a 40-hour training course on administering Narcan and its effects. Every person that completes the course also receives refresher training every few months, said Schiazza.