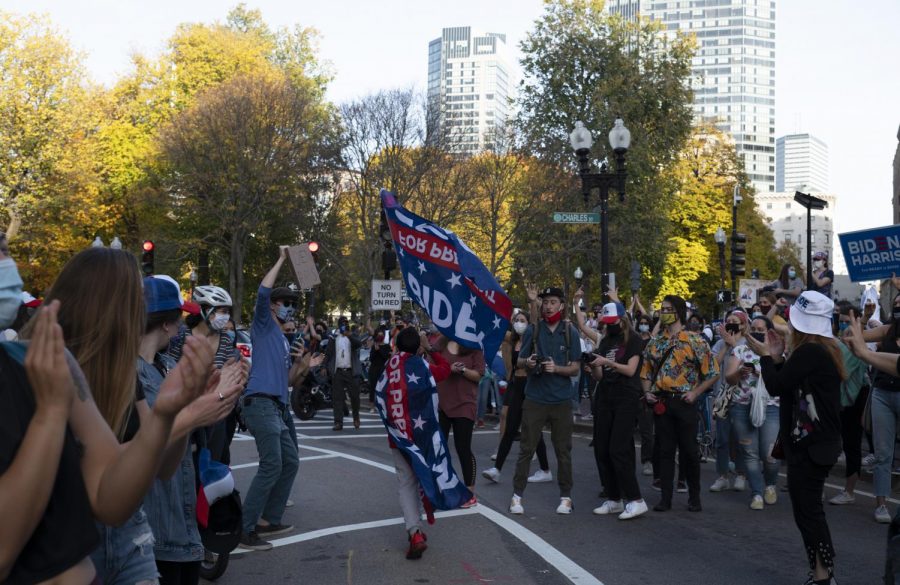 A child rides a scooter in the middle of hundreds of people celebrating the election of Joe Biden as president on the Boylston Street and Charles Street intersection on Nov. 7.

Around four years ago, I became a citizen of these “United” States. I was reluctant to become a citizen because of the reputation Americans had cultivated to outsiders—selfish people who did what they wanted and did everything gluttonously. With that, and the impending doom of Trump’s presidency, becoming an American was not a moment of pride for me.

I have now come around to the idea of calling myself an American. The reasons I hated the idea of becoming one are now the same reasons I feel a connection to the nation. I decided to try and change the things I didn’t like, wanting to make it a better country. To fight with the American people, and make it a place we can collectively be proud of, not somewhere just made for the blindly proud, who wave the American flag outside their wrap-around porches.

This Saturday was the first day in a long time I felt as though we had made a stride towards the better America, I, and so many others envision. While we obviously have a long way to go, basking in the celebration of the first win in a while, felt good.

What has to be acknowledged is the people who got us here. The true Americans that put love over hate, equality over equity, and Biden over Trump. Biden is clearly not perfect, but he is a step in the right direction, and after walking backwards for four years, a step feels big.

To celebrate the day, I stood outside the Massachusetts State House with my fellow Americans, masks on, chanting, and cheering, celebrating our victory. We had fights with the losing side, who stood opposite to us, but this time it was different. We were not fighting against the Trump supporters, but rather celebrating in front of them, and that felt amazing.

This is the first time in four years where we are no longer fighting for the legitimacy of human rights, but the reparations and consistency of them. We no longer have to try to convince our president that Black lives matter, that we have the right to choose, that families should not be separated at the border, that LGBTQ+ rights are human rights, and so much more.

For the past four years, and maybe even before that, looking at an American flag did not give me pride. I would see the flag as a symbol of one kind of American. The people who would proudly wear or wave the flag, to me, signified somebody content with the way our country was, someone maybe even proud of it. With Trump as president, pride was the last thing many felt about being an American. That flag felt more like a divisive symbol than a unifying one.

On Saturday, however, I saw so many people holding and waving the American flag. It felt like the people who were not proud of seeing the flag before had, in a way, reclaimed it. Even though this is only the tip of the iceberg, seeing an American flag in so many people’s hands and not feeling disappointed in what it stood for, is the feeling I think a lot of Americans reveled in.

Obviously, this is not the end. This is not the part of the book where things are all good again and you can close the book peacefully. This is now the sequel. The part that is maybe not as exciting or crazy as the first book, but still just as important to the story. From here, we keep fighting for and with one another. We can all take a breath, but just don’t let it be for too long, this story has only just begun.

Sabine Waldeck is a junior studying journalism. Editor-in-chief Diti Kohli did not edit this article due to a conflict of interest. If you would like to respond to this thought piece in the form of a letter to the editor, email [email protected] Letters may be edited for style and clarity.