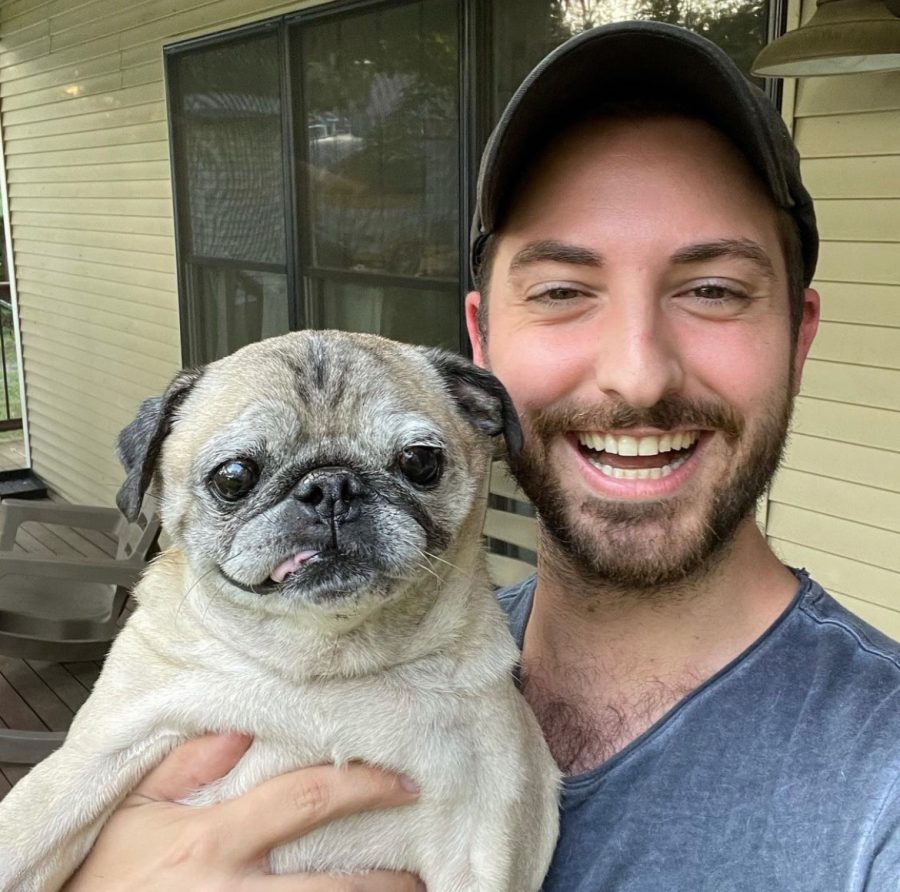 Jonathon Graziano '13 and his pug, Noodle.

Forget horoscopes or weather forecasts, there’s a new way to figure out what kind of day you’re going to have—Noodle, a 13-year-old pug.

Thanks to Jonathon Graziano ‘13, a former marketing communications major, Noodle has gone viral as millions of users, including Emerson students, rush to open TikTok at 11 a.m. to see what the world has in store for them by means of the adorable pug.

The premise of each video is to see if Graziano’s 13-year-old pug wakes up with “bones” or “no bones,” which can be identified by whether Noodle stands up, or according to Graziano, “gets mushy.”

“Noodle has done [bones or no bones] ever since I’ve adopted him,” Graziano said in an interview. “Noodle has always done this, in the morning, he’ll just be really mushy and won’t want to go on a walk.”

Each morning, Graziano’s bright and cheery face greets millions of people on TikTok, with each of his daily videos receiving an average of three million views. His own account has racked up 4.3 million followers and over 46.4 million total likes.

First-years Stella Del Tergo and Andy Ambrose said they look forward to seeing Graziano’s videos each day. The roommates in Little Building report whether it’s a bones or no bones day on their door’s whiteboard.

They said they have been following Noodle’s journey since the beginning—September 2020.

“[Graziano] probably doesn’t even realize the impact he has,” Del Tergo said. “I get texts from my friends at 10 a.m after we already had our 8 a.m.’s and we’ll go ‘I knew it was going to be a bones day, today is going so well.’”

Both Del Tergo and Ambrose said checking in on Graziano and Noodle has become a ritual—and were often relieved to find out a day that wasn’t going well, was, in fact, a “No Bones” day.

“Everyone looks forward to seeing how he and his pug are doing,” Del Tergo said.

Sometimes, it’s possible to feel Noodle’s vibe before he greets your social media thanks to Twitter account @NoodlesBonesDay, which has accumulated over 290,000 followers and reports the bones forecast for the day.

The brain behind the fan page is Alexandra Carbayo, a third-year medical student at Michigan State University’s school of Human Medicine. With her busy schedule, she looks forward to Graziano’s videos and shares the news with thousands of fellow fans.

“I’m a huge advocate for protecting one’s mental health and I think it’s a fun way to relate to taking care of yourself and doing what’s right for you depending on how you feel and your moods,” Carbayo said.

Graziano’s relationship with Noodle started around six years ago, when a woman he worked with showed him a picture of Noodle. She shared that she was fostering an older dog who needed a good home, and two weeks later, Noodle was his.

Before starting his workday, Graziano shares his morning routine with Noodle for the internet, but Noodle can be a stubborn dog and sometimes just won’t get up.

“He would just go totally limp if he didn’t want to do something and since the pandemic, TikTok is my favorite place to be,” Graziano said. “[Videos of noodle] are something that the old pug community will relate to, and lo and behold, it’s the whole world.”

Carbayo is an older pug parent as well, to a pug named Stella, who she said behaves much like Noodle. She said the videos are relatable for those who struggle with chronic medical conditions and employ ‘Spoon Theory;’ a common way to identify how much energy they have that day to complete certain tasks. With each task taking a ‘spoon,’ it’s a metaphor to share how people who struggle with disabilities or chronic illnesses plan out their day.

“I’m a huge advocate for protecting one’s mental health and I think it’s a fun way to relate to taking care of yourself and doing what’s right for you depending on how you feel and your moods,” Carbayo said. “It’s cool to have people without chronic conditions to now have something to  relate to and practice empathy to others on ‘no bones’ days.”

On “no bones days,” Graziano encourages fans to relax—to treat themselves and be kind to themselves. On “bones days,” he promotes getting things done and being proactive.

“No bones days are my favorite, I will be transparent about that.” Graziano said. “On a bones day my favorite thing to do is to call my mom, dad, and aunt.”

Graziano said taking time out of his day to call his family makes him feel better, and how a “bones day” is all about doing what’s best for you.

Carbayo said “bones days” are days where she can dedicate extra time to herself, especially when she’s busy with school. “No bones days” are ones where she takes a break, maybe sleeps in a little, and tries not to read too much of her medical textbooks.

“In med school, I don’t always get to pick and choose which days will be bones or no bones days,” Carbayo said. “But, there are little things I think we can do in those instances where you can take a little extra care of yourself after a long day on a no bones day or run some extra errands on a bones day.”

The student body lit up with the news that Noodle’s owner was an Emerson alumni; proud that a creator that gives so much joy to others have walked the same halls as them. Graziano said he loved his time at Emerson.

“The people you meet [at Emerson] are nuts, they’re crazy, but they are the best,” Graziano said.

Graziano spoke to The Beacon from a wedding with friends that he met at Emerson. He expressed how the community at Emerson is one of his favorite parts.

“A lot of Emerson students can relate to, regardless of your discipline, the need to create something,” Graziano said. “That drive to create, to be productive. More than anything I started doing this TikTok because I was so down in the pandemic.”

His favorite part of these videos is that he made something out of his year and this uncertain time in the world we live in. Noodle is our constant reminder to check in, be kinder to ourselves, and to slow down when necessary, Carbayo said.

“I’m all about checking in with myself and figuring out if I need a no bones day,” Carbayo said. “Has it been too many bones days in a row in reality? Okay, time to slow down and take a break or I’m going to burnout.”

Graziano shares the importance of the community at Emerson and the ability to create and foster a creative environment.

Graziano gave some advice for those 21 and older on their next “bones day.”

“Go to Maria’s Taqueria, bring your burrito into the Tam and have Lyn make you a Manhattan,” he said. “She knows what she’s doing behind the bar.”