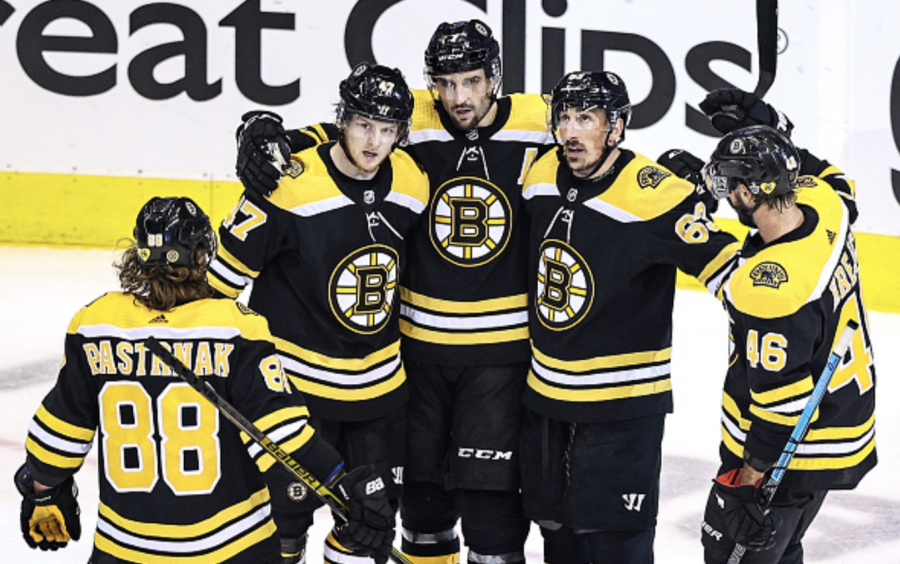 The 2020-21 NHL regular season is right around the corner, which means the Boston Bruins are back on the ice preparing for their Jan. 14 season opener. Here’s how the 2020-21 Bruins could shape up compared to last season’s squad that bowed to the Tampa Bay Lightning in the Stanley Cup Eastern Conference Semifinal.

The Bruins’ schedule looks much different this season. The NHL realigned its four divisions to accommodate COVID-19 protocols this season to compose of eight teams—with the exception of the North Division, which has seven teams.  Each team will play 56 regular-season games within their division. The newly-formed East Division, which Boston will compete in, holds teams like the Washington Capitals, Philadelphia Flyers, and New York Islanders––all of which made the playoffs last season. With that said, Boston will have its hands full.

These Bruins aren’t last season’s team. Longtime Bruins defenseman, and arguably the best power-play quarterback in the NHL, Torey Krug, left for the St. Louis Blues––and that wasn’t even the most shocking departure. Legendary Bruins defenseman and captain Zdeno Chara moved on to the Washington Capitals on Dec. 30 after 14 seasons in Boston.

Despite the losses, Boston still has its “perfection line” of freshly-minted Bruins captain Patrice Bergeron, elite winger and pest Brad Marchand, and 2019-20 Maurice “Rocket” Richard Trophy co-winner David Pastrnak. Along with the likes of young defensive stud Charlie McAvoy, underappreciated and underrated centerman David Krejci, and good at the ole-stopping-pucks-job goaltender Tuukka Rask this team will be able to remain competitive.

However, the spaces in Boston’s left side defense, formerly occupied by Chara and Krug, need to be filled. Both Chara and Krug logged 20-plus minutes of ice-time per game last season, per their individual stats on Hockey Reference.

“Make no mistake about it, [the Bruins’ plans] include looking to integrate some of the younger players that have had an opportunity to develop in our system, and us trying to see whether they were capable of handling minutes and situations that they had not been exposed to,” Sweeney said.

While it’s easy to see where Sweeney’s coming from, this could’ve been handled more neatly. Vaakanainen, Zboril, and Lauzon have played a combined 44 career NHL games—with Lauzon comprising 35 of them.

Boston’s young defensive trio were given few previous opportunities in the NHL for a number of reasons. One reason being Boston was all set with the defensemen they had, or guys like Vaakanainen sustained concussions shortly after receiving call ups from the American Hockey League in 2018. It’ll be interesting to see where head coach Bruce Cassidy slots the prospects and whether they’re ready or not.

That’s the only glaring issue regarding the Bruins’ back end, being that the right side of the defense with Charlie McAvoy, Brandon Carlo, and the returning Kevan Miller is ready to go. In a way, Boston’s defense is like that box of ingredients the chefs open up on “Chopped.” The Bruins have some defensive pieces they can work with and rely on, but there are other pieces they could mix in as well.

Offensively, it’s unclear if the Bruins have enough secondary scoring. The Bruins’ top line of Bergeron, Marchand, and Pastrnak scored 47-percent of Boston’s goals last season, according to Hockey Reference. On one hand, it’s awesome for Boston to have that level of production from those three. On the other hand, it still shows how top heavy the offense is.

Pastrnak may not be ready for the start of the season as he recovers from an off-season surgery. Boston’s performance without No. 88 and whoever steps up in his absence is something Bruins fans should look out for.

Winger Craig Smith, a new acquisition, should provide some much-needed punch in the middle six forwards group––given he has averaged 21 goals and over 200 shots over the last three seasons, per Hockey Reference. I have a feeling Smith will form a solid duo with third-line centreman Charlie Coyle.

Wingers Jake DeBrusk and Ondrej Kase must step up on the second line after underperforming in the 2019-20 Stanley Cup Playoffs. DeBrusk and Kase individually only netted four points and wielded a negative plus-minus rating, according to Hockey Reference. The two wingers bring speed and offense to the Bruins’ game, with DeBrusk tucking in 27 goals during the 2018-19 campaign and Kase producing an impressive 53-percent Corsi rating on average.  However, they need to elevate their play and bring more consistency on the ice.

Bruins’ fans should also be eager to see who plays alongside Sean Kuraly and Chris Wagner on the fourth line. Could it be a homegrown option like young forward Jack Studnicka, or offseason signee Greg McKegg? Studnicka offers more speed and skill to the bottom line, whereas McKegg provides more physicality. Either one wouldn’t be a surprising choice.

The Bruins can depend on the steady duo of Rask and Jaroslav Halak for goaltending. Rask and Halak together averaged a .920 save percentage and 2.25 goals-against average over the past two seasons. It’s tough to find issues with those stats.

So what can we expect from this season’s Bruins? Boston should be a playoff-caliber team once the regular season is all said and done, but Boston will be facing stiff competition all season. With a good chunk of their core still wearing black and gold, the Bruins have every chance to make another run at the Stanley Cup. However, there’s still uncertainty whether Boston’s youth movement on defense and in the supporting cast can deliver alongside the Bruins stars.