The Berkeley Beacon • May 1, 2021 • https://berkeleybeacon.com/boston-dispensaries-turn-a-new-leaf-amid-pandemic/ 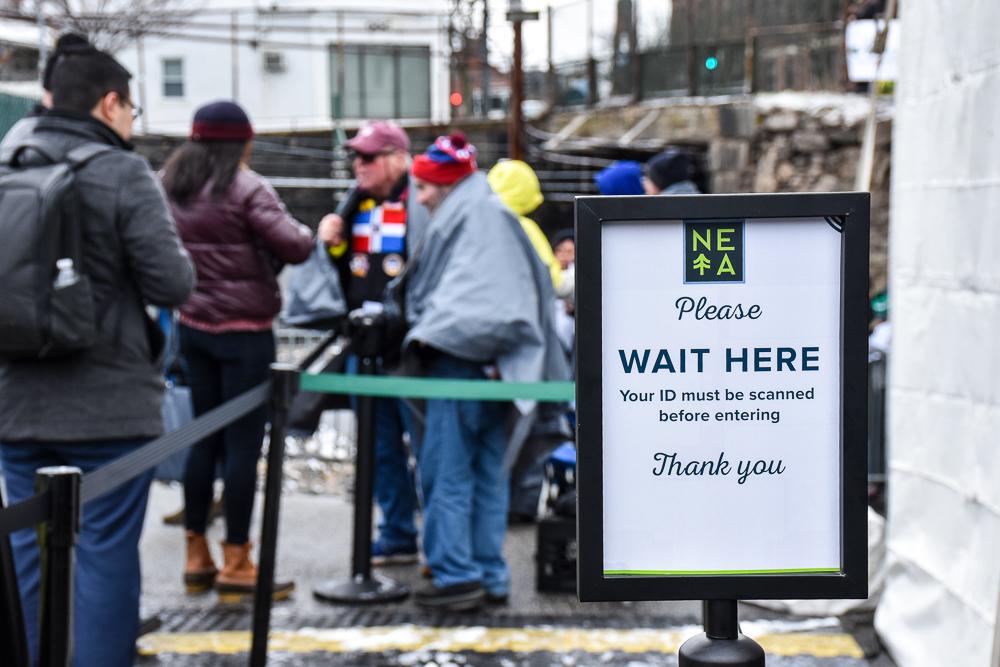 Pure Oasis, the first recreational dispensary to open in a major city on the East Coast, opened its doors for the first time in Boston on March 9, 2020, only to close them two weeks later. The shop was shuttered for two months after Massachusetts Gov. Charlie Baker issued an emergency order barring all non-essential businesses from operating due to the COVID-19 pandemic.

Baker’s order was issued on March 22, 2020 and followed by another order that same day from the Cannabis Control Commision—which oversees the licensing and sales of medical and recreational cannabis in Massachusetts. The order called on all dispensaries in the state to cease cannabis sales for at least two weeks, with the exception of medical cannabis, which was deemed as essential. Massachusetts was the only state in the country that forced dispensaries to halt adult-use cannabis sales.

The co-owner of Pure Oasis, Kobie Evans, says those orders and the ensuing whirlwind of the pandemic left him and his business reeling. “We had no idea that it would land right at our doorstep, we just thought it was a world away and the next thing you know we’re shutting down for two months,” he says.

The two weeks of estimated closure time for adult-use cannabis sales turned into a month and then two, leaving Evans and other dispensary owners wondering when, or if, they would ever be able to reopen. Finally, on March 18, 2020, Baker announced the stay-at-home advisory would be relaxed and some businesses would be allowed to reopen under strict social distancing guidelines.

Under Baker’s new plan, adult-use dispensaries were finally allowed back in business, although with some altered operational guidelines. Dispensaries were required to take all orders online or over the phone and provide curb-side pickup to customers.

“We were just learning how to operate as a regular retail business and then we had to operate as a curbside only and we had no idea how to do it,” Evans says. “We were trying to figure it out and it only lasted for a couple of days, and then we were able to have people in the store on a limited basis.”

Josh Winokur, chief executive officer of Berkshire Roots, says the reasoning behind shutting down recreational cannabis sales was public safety. “[Baker] didn’t want travelers coming into Massachusetts, specifically to go to cannabis stores. I think because recreational [sales] tends to draw many more customers than the medical side, he didn’t like the idea of too many people gathering at a dispensary,” he says. “Early days there was just so much unknown about how to protect people, and not bringing them together was the primary way to [do that]. We and the other dispensaries were able to demonstrate we’re probably doing more than most public places are doing to keep people safe.”

Berkshire Roots, originally founded in Pittsfield, Massachusetts, opened its second location in East Boston in July 2020. The pandemic proved to be a slight roadblock in the opening in Boston, Winokur says.

“We would have been able to open earlier than that if it were not for COVID but obviously things got a little delayed at the beginning of the year,” he says. “The first thing was the unknown, ‘What is happening? What do we need to know? How do we protect our staff? What does that mean for patrons?’ We were pretty quick to establish policies in production, in the retail environment for our staff and for our guests and we’ve been pretty healthy as a company.”

Berkshire Roots implemented a plethora of new safety procedures as they slowly welcomed customers back into their shop. Winokur says they installed barriers between stations, social distancing signage, strict sanitization of the counter and debit card readers after every customer and staff interaction, limited capacity dictated by the state, and required mask and glove wearing by all staff.

When the pandemic first struck Massachusetts last year, many every-day essential items like toilet paper, cleaning supplies, and hand sanitizer were in short supply. Berkshire Roots, along with other dispensaries in Massachusetts, volunteered to manufacture hand sanitizer for the state.

“There were probably half a dozen of us in Massachusetts that volunteered to create hand sanitizer, because we have those extraction labs and we have some knowledge of how to do things like that,” he says. “The state actually turned to companies like us and said ‘Hey would you like to do this?’ and we volunteered. It wasn’t necessarily protocol but that was kind of a state cannabis industry partnership.”

Because Berkshire Roots’ East Boston location has only operated while COVID-19 raged, Winokur says its been difficult to gauge the pandemic’s impact on business, but, he says he feels the ensuing isolation helped many people take time to care for themselves and their mental health.

“That did enhance people’s interest and desire to help their well being. There’s a big portion of the market that fits that category ‘It helps me with something, anxiety, sleep, nausea, if you are a cancer patient’ and all kinds of things,” he says.

A sophomore communications studies major at Emerson, who wished to remain anonymous due to privacy concerns, says he was diagnosed with Neurofibromatosis—a group of genetic disorders that causes tumors to develop—and found smoking cannabis helps him cope with the anxiety that stems from his disability. “I get anxiety a lot and have dealt with some depression, so smoking usually helps with the anxiety. I use strains that usually lift you up and make you feel happier. I smoke once every two weeks, sometimes more depending on how I feel and how often Emerson puts us in lock down with nothing to do,” he says.

The regulations surrounding legalized recreational cannabis sales in Massachusetts make him feel safer about buying and consuming cannabis, he says. “I just want to go through a place that I know is regulated. If I’m going to be smoking in Boston, I might as well have the legit stuff,” he says.

Evans says all medical and recreational dispensaries in the state must follow the same set of guidelines set by the Cannabis Control Commission. “We all have the same strict regulations regarding cameras and making sure there’s no product that’s leaving the store unauthorized,” he says. “It’s similar to a bank or any business with high security because to a certain degree it’s still a controlled substance and you don’t want it to get into the hands of someone underage. We wan’t to make sure that everyone stays safe and that the product is always under the watchful eye.”

While some students smoke for the medical benefits, others say it’s just plain fun. “We all know it’s fun, it can be a nice change from alcohol, and I personally think it’s a lot better than alcohol use,” Winokur says. “There’s certainly a big part of the market and when adult use opened up that really freed people to take advantage of that without going through the medical part.”

Josh Carone, a junior visual and media arts major, says he first visited the New England Treatment Access, or NETA, location in Brookline, Massachusetts as soon as he turned 21 last year. “You’re just curious to find out what a dispensary is like because it’s weird buying a drug legally from a government issued place,” he says. “It’s actually in an old bank. It looks like a government building because it was a government building.”

He says he enjoys smoking with friends and watching movies. “You watch the movie Rango under the influence of weed and it’s an experience unlike anything other,” he says. “For me, especially as someone who likes watching movies and talking and laughing and it’s just the perfect supplement.”

While he still buys from dealers in the Boston area because of cheaper prices, Carone says he likes the consistency in product that dispensaries offer. “I will say it’s very expensive. The first time I went there I was aghast and the guy was like ‘Yeah Taxachusetts.’ It’s like $55 plus $10 tax. It’s a good product but you are definitely paying the piper.”

An eighth of cannabis from Massachusetts dispensaries average between $50 to $60 before tax, according to The Boston Globe. While the average street value for an eight in Boston varies from $40 to $45, Carone says. Massachusetts implemented a 20 percent tax which is made up of a 6.25 percent tax on all retail purchases of cannabis products, a state excise tax of 10.75 percent, and an optional local tax of 3 percent since July, 2018. Since Jan. 1, 2021 the cannabis industry in Massachusetts has generated a total of $311 million, according to the Cannabis Control Commission.

A senior at Emerson who is currently studying remotely from California and wished to remain unnamed because of job prospects, says of the dispensaries he has visited in the Boston area, Berkshire Roots has been his favorite because of its prices. “When I was buying a couple months ago Berkshire [Roots] just had the better prices and that is what really it comes down to sometimes,” he says.

When he was studying in Boston last semester, he says he felt safe going to Berkshire Roots with all the COVID-19 protocols set in place. “A lot of places were allowing you to order beforehand and then just pick it up which was super nice. With Berkshire [Roots] you could just order on your computer, you schedule a certain time to pick it up, it’s like a window of an hour or two,” he says. “You stand outside, there’s no one really waiting inside, it’s only a certain amount of people that are checking out, like maybe three or four [people] and then they consistently rotate people out through a different door.”

As a California native, he says he’s excited to see the cannabis industry begin to bloom in Boston and throughout the state. “Boston is kind of known as a drinking city,” he says. “There’s literally bars on every street in Boston and liquor stores that stay open past the 10 p.m. usual cut off time. It’s definitely cool to see that [dispensaries] are starting to pop up around Boston and supply people who are looking for [cannabis]. It brings in more money for the state, brings in more money for medical research, medical supplies, things that weed can help with.”

Evans says as a person of color who has been targeted by over-policing, starting his own dispensary in Boston and creating more job opportunities in his community is a part of why he opened. “Being someone that has been targeted by police for the suspicion of selling drugs, now owning a dispensary and having access to all this product that was once vilified and criminalized, it’s just an interesting paradox that now all of a sudden it’s legal. It’s just surprising at times.”

He says as the pandemic begins to relinquish its hold, he hopes to grow Pure Oasis by opening more locations in Boston, as well as neighboring states as legalization is expanded. He also says he hopes to create Pure Oasis cultivation facilities to create their own products instead of strictly sourcing them from other distributors in Massachusetts.