‘Boston is not a marathon to be trifled with’: 30,000 flocked to Monday’s race 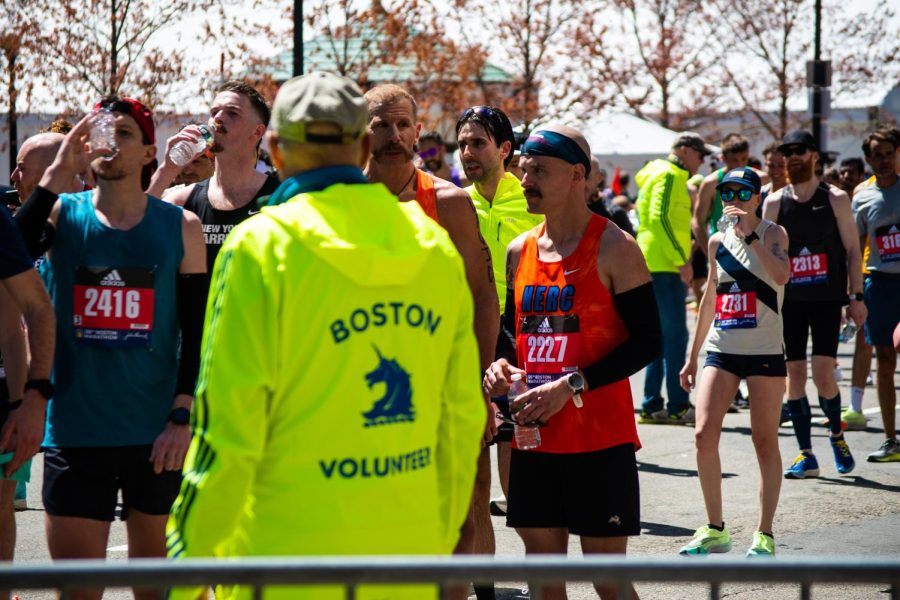 By Bailey Allen and Adri Pray

Downtown Boston was transformed on Monday, as thousands of runners from across the world crossed the finish line of the 126th Boston Marathon—the first run to be held on Patriots’ Day since the onset of the pandemic and 189 days following the 2021 marathon in October.

For Carlie Brainard, an Emerson graduate student, the event was more than just a marathon; partnering with a nonprofit, she managed to raise $7,530 for Community Rowing Incorporated.

The five-hour and three-minute run proved to be more enjoyable than Brainard originally anticipated.

“It was so much more fun than I would have expected,” she said. “I thought that I was going to be in terrible pain the whole time. I was nervous that I was going to get bored—but the crowds in Boston were just unbelievable and it caused this adrenaline rush.”

Coasting until mile 22, she pushed herself up Heartbreak Hill in Newton, and eventually managed to finish 23,164th overall.

“Even when I was exhausted, I would keep running for the fans and the spectators who came out and were cheering us on,” she said. “I tried to make it a point to give every little kid that I passed a high five.”

To Brainard, running through Wellesley College was the most exciting part of the race because of the “Wellesley Scream Tunnel,” a student-led gauntlet lined with cheering fans.

After the marathon, Brainard said she met her friends and family to eat dinner at Maggiano’s Little Italy, fulfilling her desire to eat “tons and tons” of pasta.

The Boston Athletic Association estimates around 500,000 spectators gathered around the course, cheering on the nearly 25,314 runners on the 26.2 mile route. Volunteer Yvonne Peychal woke up at 5 a.m. and was expected to arrive at her post at 7 a.m. on Monday morning in order to fend off the crowds.

“I used to run marathons,” Peychal said. “I never qualified for Boston. My husband ran it five times and he’s been volunteering for 15 years. After the bombing in 2013, I decided to volunteer with him.”

The 126th Boston Marathon marks the ninth year since the terrorist attack that killed three people and injured over 250 others.

“There’s just the two of us and I thought, ‘I want to be with him no matter what,’” Peychal continued.

“Boston is not a marathon to be trifled with,” he said. “It’s very difficult and it’s like an older woman, so to speak—you have to pay respect to them. Otherwise, they can slap you around and teach you some respect, which I learned the hard way last year.”

Clark participated in the marathon last October, during which he started off too fast and exhausted himself to the point of injury.

“It was enjoyable up until the finish when I came in too hot,” Clark said. “I took it out too fast in the first 5K and never really backed off.”

“I can say the old lady slapped me around and taught me some manners,” he added.

Solomon Hailu of Los Angeles came in at two hours and 57 minutes. Though he had qualified for the 2020 marathon, that edition of the race was canceled due to the pandemic, meaning that he had to wait until last Monday to run again.

“I knew everything to expect in terms of Heartbreak Hill and how you need to conserve energy—still went out too fast,” he said. “There was awesome crowd support and I don’t think we could have asked for a more beautiful day.”

Compared to his past experience running a marathon in New York City, Boston’s 26.2 miles proved to be “challenging.”

“You can do well, you just need to run with your head and not go out too fast and be really disciplined,” he said. “New York is a little more dense with more turns. For Boston, there weren’t really that many turns—it’s a pretty straight shot. It’s great.”

Supporters of each runner lined the marathon route and waited at the Public Garden to reunite with their exhausted yet accomplished loved ones.

Kristie Aldridge stood patiently on the grass in the Public Garden with her children Katie and Fletcher, eating sandwiches while waiting for their father James to cross the finish line. They had all flown from Raleigh, N.C. to watch him compete.

“We got to see him at mile 21 at the top of Heartbreak Hill,” Kristie Alridge said. “As the mother and the wife, that running career takes a lot of support from a family perspective, but it almost makes it feel like we’ve earned this with him. So it’s a lot of fun.”

The two children unfurled a poster they made for their father, which read, “Don’t wipe out,” next to a drawing of a toilet paper roll.

James Aldridge also ended up finishing with a time of two hours and 57 minutes, reaching the finish line at 1 p.m.

“It’s wonderful and very supportive with high energy spirits around,” Arbaugh said. “Especially when you’re on the little bridge [over the finish line]. That was a nice spot to stand and watch them come in. It was awesome to see the elite runners.”

The Arbaugh matriarch previously participated in California’s Avenue of the Giants Marathon in 2018 after much prodding from her son Ben. Tonna Arbaugh qualified for the Boston Marathon after completing the California marathon and was slated to compete, but was derailed by the pandemic.

“I qualified for Boston—my first marathon, but then COVID took over,” she said. “Of course they canceled Boston, and I did it virtually.”

For the Arbaugh family, Boston’s gathering isn’t just a celebration of athletic achievement, an excuse to reunite.

“It’s a nice little family reunion—plus it’s my son’s birthday today,” Arbaugh said. “That’s why I planned on coming to Boston to watch them run.”

“Being here with the two kids, there were times I needed to go pick up sandwiches or get in line for the restroom and everyone was just so helpful and said, ‘Well, don’t worry, I’ll watch your kids,’” she said. “I feel like this really is a community and a fun and safe experience for a family.”