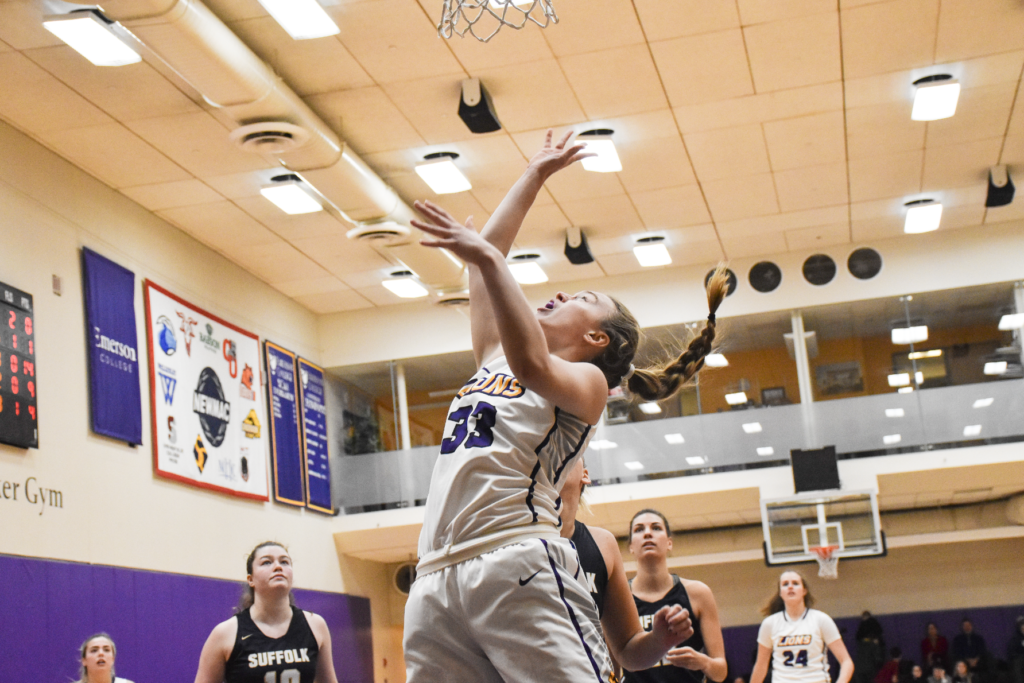 The last woman to score 1,000 points for Emerson was Kristen Brice during her senior season in 2015. Boyle accomplished the feat in 84 games and averaged 11.9 points per game while shooting 51.4 percent.

Boyle said her family witnessed the 79-36 win over Mount Holyoke before flying back to their home in Scotts Valley, California.

“I was nervous because I didn’t let my family and friends tell me how close I was, but I got the hint that I was close when my family came to visit,” Boyle said. “I was so focused on getting it while they visited so I was actually relieved when it happened.”

Boyle, a visual and media arts major, proved a reliable inside scorer early in her college basketball career—averaging 12.4 points per game during her freshman season.

“The one thing that has served Charlie well throughout her time here starting from day one is her level of physicality,” Head Coach Bill Gould said. “Going from a high school senior to a college freshman can bother most kids, but she thrived playing physically.”

In her sophomore season, Boyle averaged 12.7 points per game and played in the starting lineup for all 25 of the Lions’ games. She entered her junior season with 629 points, but a back injury kept her out of the first six games of the season and restricted her to 8.9 points per game.

After experiencing less success than in her previous seasons, Boyle said she learned how to focus more on durability.

“I learned to make sure that you don’t have one part of the body that is too strong and another part that is too weak, and to stretch a lot,” she said. This season, Boyle reached career highs of 13.5 points per game while shooting a conference-best of 58.8 percent.

“We need to have someone be a presence in the paint so that when other teams watch us play they know they have to worry about us inside,” Gould said. “She’s a player you can’t ignore.”

Sophomore forward Sam Boyle, Charlie’s sister, said she aims to fill the void Charlie will leave after finishing her senior season with the Lions this year by playing similarly under the basket next year.

“Charlie is one of the last true post players I know because the game of basketball is moving away from that kind of play,” Sam said. “Next year when she’s gone I’m going to work on having the same composure she has in the post.”

As her college basketball career comes to a close, Boyle said she awaits her senior night game against Worcester Polytechnic Institute on Feb. 13.

“I’m looking forward to senior night because I’ve put so much time into basketball,” Boyle said. “It will be nice to have that acknowledgment with friends and family.”