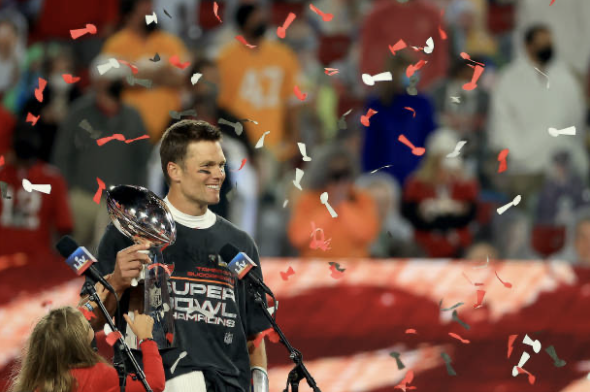 The dream of becoming two-time Super Bowl champions turned into a reality for the Tampa Bay Buccaneers on Sunday night as Tampa Bay defeated the Kansas City Chiefs 31-9 in Super Bowl LV.

In Buccaneers wide receiver Mike Evans’ mind, Tampa Bay’s chances of winning the Super Bowl this season increased astronomically during the offseason. The main reason behind the improved odds was the franchise signing legendary quarterback Tom Brady in the offseason.

“When we got Tom, I knew it was a possibility,” Evans said in a post-game interview with NFL Network.

Brady completed 21 of 29 passes for 201 yards and three touchdowns, earning his fifth Super Bowl MVP award and seventh Super Bowl trophy—the most of all time. Brady now has more Super Bowl wins than any NFL franchise. He can now pull a “how do you like them apples?” style counterpoint whenever a team brags about their Lombardi trophies.

“We knew we were playing a great football team tonight, and we got the job done,” Brady said in the post-game press conference. “[If] you want to get this far, you got to get the job done, and we did it.”

For a guy who’s adding another championship ring to his already absurd and exalted resumé, Brady knows what he’s talking about.

However, the unofficial true MVP award for Tampa Bay belongs to its defense. The Buccaneers’ defense played tremendous football against the NFL’s top-ranked offense, limiting the Chiefs to only three field goals and forcing two turnovers, per ESPN.

“[Tampa Bay] played a heck of a game defensively and offensively,” Chiefs star quarterback Patrick Mahomes said in the post-game press conference. “They kind of took away our deep stuff, took away the sidelines, and they did a good job of rallying to the football and making tackles.”

Tampa Bay executed its best defensive performance of the playoffs during “the big game.” When you face a Kansas City team that averaged 30 points per game coming into Sunday and hold them to just nine points, your defense earns a round of orange slices.

Before Brady arrived in Tampa Bay, the franchise sat between a rock and a hard place. The Buccaneers’ last winning season occurred in 2016, they hadn’t made the playoffs since 2007, and their last playoff victory happened to be their first Super Bowl win back in 2003—all according to Pro Football Reference. The team’s misfortunes primarily changed thanks to No. 12.

Wherever Tom Brady goes, success follows. Look at what happened to Brady’s former team in the New England Patriots. That franchise devolved from a perennial Super Bowl contender with Brady for the last 20 years to a sub .500 team this season without Brady. Now look at what Brady’s done in Tampa Bay in just his first season as a Buccaneer.

For the Tampa Bay Buccaneers, success knocked on their door for the first time in 18 years, along with the earned recognition of Super Bowl champions.