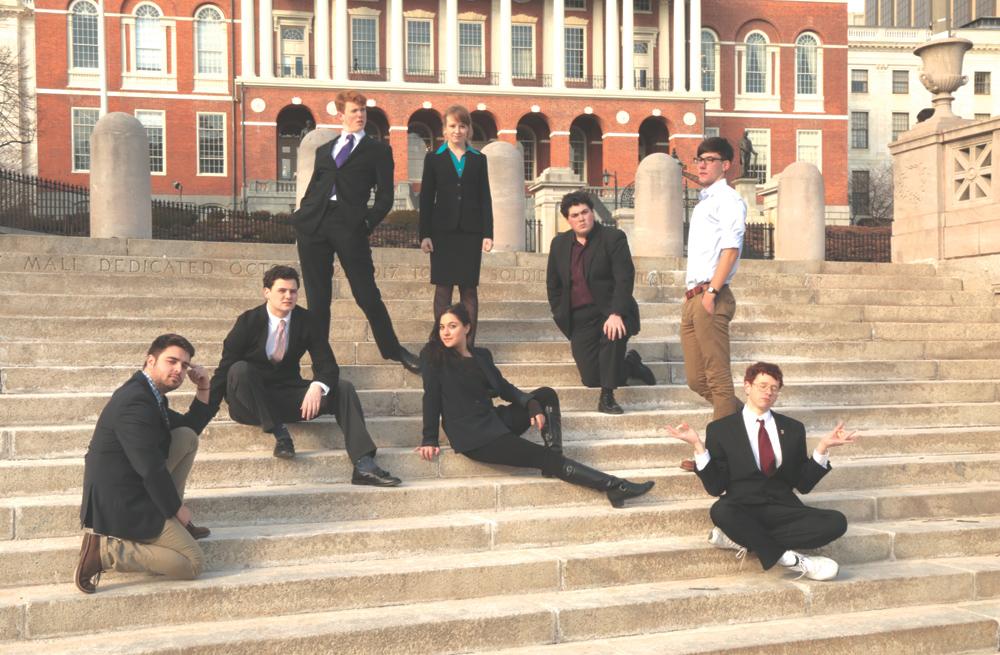 You turn on The Emerson Channel and see that a news program is coming up next. The title sequence rolls as the Breaking News logo fills the screen. The hosts introduce themselves and dive right into “Top Stories”, and one of the hosts reads, “Employees at a Danish zoo put down a perfectly healthy giraffe this week due to fear of inbreeding.” But then she continues, “It was the only way they could keep themselves from fucking that giraffe.” This isn’t your typical news show.

The cast and crew taped the first of five episodes for the semester in front of a live studio audience on Friday, Feb. 14. This season marks the show’s fifth on the air, and features new hosts, crew members, and actors.

“This kind of puts a modern twist on the news and makes it more relatable to college students,” said junior visual and media arts major — and first-time director of Breaking News — Hannah Kole.

Segments that followed included a mock interview from Sochi, Russia using a green screen, pre-recorded street interviews conducted by field correspondents, and a debate-based segment between the two hosts called “Mouth to Mouth” where marijuana legalization was discussed. From the moment the cameras started rolling, the cast made mocking references to popular culture, and used sexual innuendos and infrequent but effective profanity to shape its ironic newscast.

“It’s just a fun way to approach some really serious issues,” Crowe said. “It’s entertaining and engaging, which I think makes people prefer to listen to us.”

At the taping of the premiere, the cast only had to re-record one scene out of the entire half-hour broadcast, and every chair designated for the studio audience was filled with students who couldn’t stop laughing.

The cast consists of the two main hosts, a team of correspondents who conduct person-on-the-street interviews, and a studio cast who take on satirical characters to interpret the news for their audience with a comic spin.

The scene that evoked the most reaction from the crowd was the interview with politician Colt Colkin, played by senior visual and media arts and political science major Zach Ehrlich, which was conducted by Crowe and McManus. As Colkin discussed his plans to run for office, Crowe pointed out the fact that he had essentially been kicked out of office, despite his campaign’s deceiptive attempts to establish his credibility as a potential leader. But Colkin just brushed it off, and his arrogance made obvious jabs at the political system and the lack of honesty in politics.

Sometimes the writing on this show is so effective that even those working behind the scenes find themselves inadvertently engaging with the actors on set. Junior visual and media arts major and current associate director of Breaking News Andy Schlebecker reflected on his past job working on graphics for the show.

“I remember I’d get distracted sometimes during my first semester on the show because I’d be laughing in the studio.” said Schlebecker. “I think that especially with student work, that’s top notch.”

Working on Breaking News allows cast members, like freshman visual and media arts major Jake Prizant, to test the waters in both comic writing and television news broadcasting, a combination seldom found in Emerson student productions. Prizant plays both a studio and field correspondent on the show.

“It’s a lot like stuff I’d like to be doing in the future,” he said, “like writing for a comedic show or performing as these kinds of characters. I don’t have a lot of opportunities to do a lot of film work, so [Breaking News] is a cool way to bridge that gap.”

Like all of the shows on The Emerson Channel, Breaking News serves as a learning opportunity for students like Prizant who potentially will pursue a career in a similar style of television writing or broadcasting while also producing professional quality episodes.

“The basic structure of the Emerson Channel is that they exist as learning shows,” said Schlebecker. “Breaking News takes that a step further and is great not only as a learning opportunity, but also in the content and quality of the content it puts out. The product quality equals the experience.”