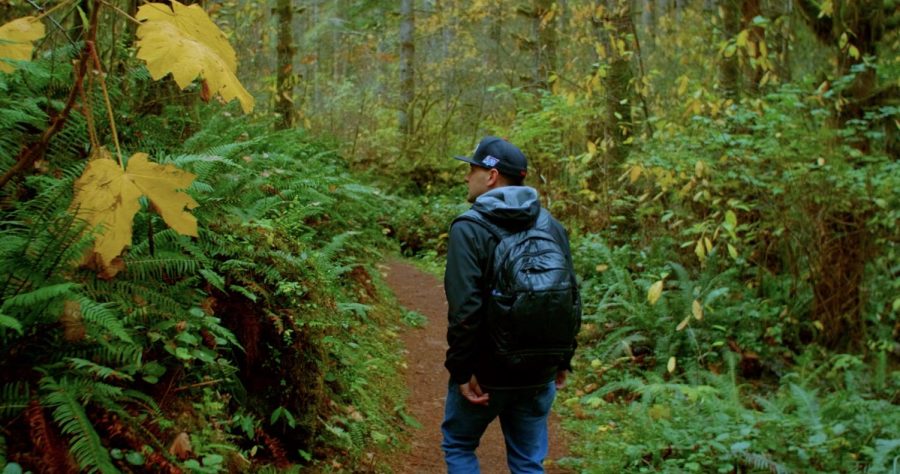 Still from Sky Hopinka's “Maɬni–towards the ocean, towards the shore.”

After 18 months of Zoom screenings and discussions, Emerson’s “Bright Lights Film Series” hosted its first in-person event since Mar. 12, 2020 on Oct. 8 with a screening of “Maɬni–towards the ocean, towards the shore.”

The Paramount Center’s Bright Family Screening Room welcomed a full house of attendees for a screening of Sky Hopinka’s feature length debut, a documentary spoken mostly in Chinuk Wawa, a language from the Chinookan tribe, which is primarily located in the Pacific Northwest. The story follows Sweetwater Sahme and Jordan Mercier’s exploration of their Chinookan roots, contemplating the afterlife, rebirth, and the place in between.

A live discussion with Hopinka followed the screening. He said he wanted to stray away from making the film strictly accessible to white viewers and instead embrace his own culture.

“I started making films because I wanted to explore what the possibilities are for Indigenous cinema that isn’t made or catered to a white audience, and how do you make films for indigenous audiences,” Hopinka said during the post-screening discussion.

The film was inspired by the Chinookan origin of death myth “with its distant beginning and circular shape.”  The cosmological myth, a theme in the myths of various cultures—one that details the origins of a culture and the problems they face—explains it as the result of a debate between two people where one would favor death, while the other favored immortality. The film places an emphasis on nature through its setting and atmosphere shown with long scenic shots in the Pacific Northwest.

Explaining the death myth’s origin, Hopinka found it to be a connection not just between Sweetwater and Jordan, but everyone. It relates to the film’s message about spirituality and the idea that death isn’t the end, but rather a part of life.

“The origin of [the] death myth became apparent that this is something that we’re all moving through in life,” Hopinka said. “If the origin of death myth isn’t the beginning, everything spouts out from there in terms of how we relate to loss and to each other, ancestors, and the future.”

Hopinka discussed how he wanted to embed the myth within the storyline.

Taking inspiration from his own indigenous roots and his learning of the Chinookan language, Hopinka approached Sahme and Mercier with the concept of focusing on Chinookan culture, and they were on board. Considering they are longtime friends with Hopinka, conversations feel private and act as any comfortable discussion between old friends.

“These are good friends in my life,” Hopinka said. “Part of that is having a relationship with someone and knowing what you’re doing and filming and not trying to be sneaky. I always let them know when I’m running the camera and telling them what we’re going to be doing. We have a lot of conversations around these sorts of things.”

Moderator and visual media arts department chair Cristina Kotz Cornejo reflected on the rawness of the relationship between Hopinka, the interviewer, and his interviewees.

“The perception of how you get the honesty and comfortableness of your relationship with your friends, what comes through is this intimacy,” Cornejo said in the post-screening discussion. “It’s almost like we’re a fly on the wall watching a conversation, but we’re not seeing you, but you’re there and you can feel that presence.”

Intriguing angles are incorporated throughout the film, with the camera positioned in a way that feels personable and real, making the viewer feel as though they’re in the scene with Sahme and Mercier.

Sound design further pushes the imagery of nature with the constant sounds of water, connecting back to the waterfall and the canoe trip. One scene, in particular, does this incredibly well when Hopinka blurs the focus of the camera and circles around in one position. The only sense the viewer has is sound, so the noises of the woods can be heard. In a theater setting on the big screen, it’s most effective and immerses the audience to connect with nature themselves.

Sahme connects to the outside environment when she goes to a waterfall and takes part in a waterfall cleansing, while Mercier focuses on Chinook canoe families and attending a Chinook ceremony. Each journey offers insight into the subjects’ families and spiritual backgrounds.

“I want to give people the space to move through the answer and try and find an answer,” Hopinka said. “There’s a lot of weight and power in the things people want to say and I don’t need to investigate or interrogate for the answer that I’m looking for.”

Hopinka said he wanted to make the film feel as natural as possible, focusing on using the genuine abilities of his camera.

“It felt weird to indulge in digital attractions when Sweetwater and Jordan are sharing so much emotion with themselves,” he said. “The sound design and soundscape was a way to try to provide a dreamy sort of space. A space that offers a sort of in-betweenness, this shoreline between life and death, these two different places: the spirit world and the land of the living.”

Kotz Cornejo said watching the film for the first time on her laptop didn’t do it justice.

“I watched the film on my small screen on my laptop, so this is my first time watching it in a theater, and it really impacted me,” Cornejo said. “The use of sound design also, the poetry of the narration which is done in Chinuk Wawa, those two elements were used to drive the emotion of the story.”

In a similar naturesque scene, Sweetwater talks about the uncertainty of the future. The camera blurs her in the foreground, focusing on the trees in the background. At the end of the film, Hopinka captures people moving around in a blur motion effect on a field, beautifully capturing the subject and the nature around them.

Through this technique, Hopinka represents the energy people have and create, in relation to the film’s message of spirituality.

Heavy significance is placed on language throughout the film. Hopinka discussed the importance when answering a question about Sweetwater speaking English, even though Mercier and other people in the film spoke Chinuk Wawa.

“I didn’t want to create a hierarchy between the two languages,” Hopinka said.

“Chinuk has always been a way for me to be expressive in film through the friends I have, through the community I’m a part of,” Hopinka said. “It was a way for me to be like ‘What does a film look like entirely in Chinuk Wawa where it isn’t a spectacle to have a language, it’s just everyday usage? What does it look like in a contemporary setting?’”

Though he hates to edit his voice, Hopnika realized the importance of the film’s narration to the narrative and wanted to do both language translations justice.

“As I was blocking out Sweetwater and Jordan’s scenes, I was trying to figure out how they fit together,” Hopinka said. “I was trying to find a common way to tie them together, and I felt like, okay I think I need to do a voiceover as a way to provide some abstract way of context to everything.”

To Hopinka, freedom to make what he believes in is important. He goes by his own guidelines to do it ethically, kindly, and gently to do both himself and his story service. Hopinka thinks a lot about permissions to do what filmmakers want to do to express themselves and their ideas.

“No one is going to ask you to make the films you want to make,” Hopinka said. “Having these tools so that I don’t need to depend on anyone, I don’t need funding from anyone. I can learn how to shoot, how to edit, I can make what I want to make. Fortunately, I have people around me that offer critique and feedback and help me make [films] as best I can.”