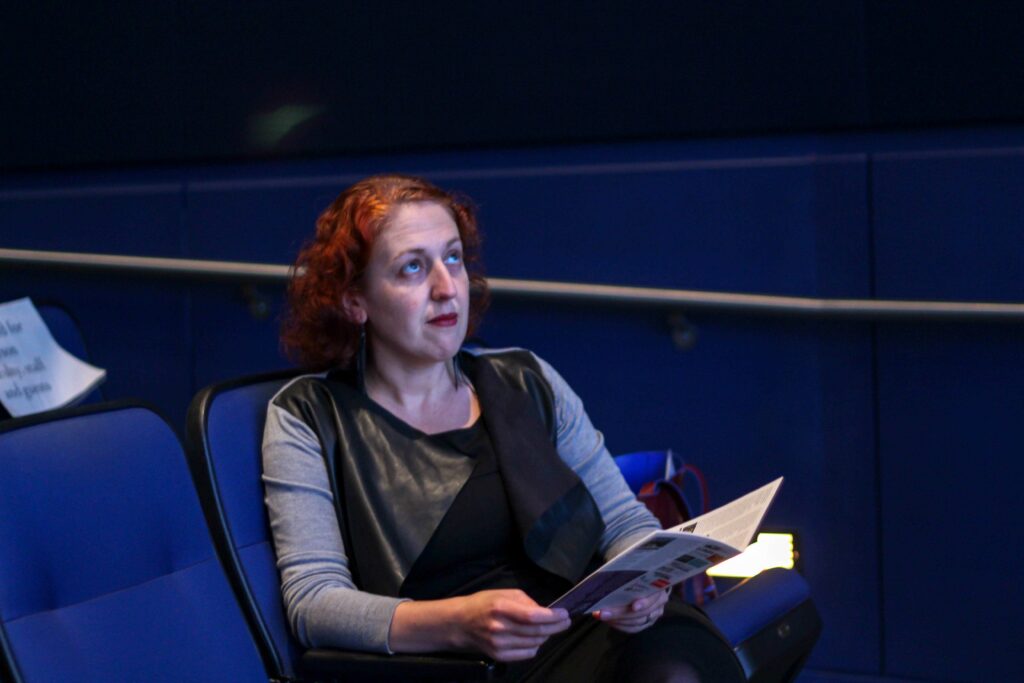 Anna Feder at the Bright Lights Film Series in 2019.

The series is curated by VMA Professor Anna Feder and each screening is free to the Emerson community and general public. Each week, the film will be available for a 24-hour window starting Wednesday at 7 p.m. EST, and will conclude with a live moderation conversation on Thursday at 7 p.m. EST. Registration is available through the ArtsEmerson website and will take place every Wednesday at noon.

The first film in the series, On These Grounds, will be shown on Wednesday. The English documentary is set in South Carolina and looks at the aftermath of a viral video showing a white school resource officer being violent towards a Black teenager.

Fruits of Labor, which is set in rural California screens on Sept. 29. The film follows a Mexican-American teenager who dreams of graduating high school amidst increased, threatening ICE raids in her community that strain her family and her goals. The English documentary comments on issues concerning immigration, gender and sexuality, race, and environmental and economic justice.

Glitch in the Matrix will play on Wednesday, Oct. 7, and, taking influence from The Matrix, the film interrogates whether or not the world we live in is actually a simulation. The documentary explores science, philosophy, and conspiracy theory while commenting on mental health and disability justice.

The following week, on Oct. 13, the series will screen United States vs Reality Winner, a female-directed film about a 25-year old who leaked a document about Russian election interference to the media.

On Wednesday, Oct 20, Malni-Towards the Ocean, Towards the Shore will screen. The documentary, mainly spoken in the Pacific Northwest language of Chinuk Wawa with English subtitles, shares the stories of Sweetwater Sahme and Jordan Mercier as they discuss afterlife, rebirth, and the place in-between, based on the Chinookan origin of death myth.

End of the Line: The Women of Standing Rock will be shown on Wednesday, Oct. 27. The film depicts a group of indigenous women who risk their lives to halt construction of the Dakota Access Pipeline.

Not Going Quietly, a documentary about dealing with disability issues and mental health, will screen on Wednesday, Nov. 10. The film follows Ady Barkan, a father and rising star in progressive politics who is diagnosed with ALS and ignites a political movement called “Be a Hero.”

On Wednesday, Nov. 18, No Ordinary Man, which follows an American jazz musician named Billy Tipton who found great fame during the mid-twentieth century, will be shown. Tipton’s career was upended when it was revealed that he was assigned female at birth and his fame turned into “an ambitious woman passing as a man in pursuit of a music career.” The documentary is a collaboration between trans artists who together celebrate Tipton’s story.

Bright Lights will host No Straight Lines: The Rise of Queer Comics on Wednesday, Dec. 1. The documentary, spoken in English and Spanish with English subtitles, shares the story of five cartoonists who portray various topics within themes of race, gender and disability through their funny and profound work.

Poly Styrene: I am a Cliché which follows a woman of color in the United Kingdom who introduced the world to rock music, singing about identity, consumerism, postmodernism and more will be shown on Wednesday, Dec. 8. Styrene left her mark on the Riot grrrl and Afropunk movements, while challenging misogyny and racism.

Bright Lights’ last addition to the fall 2021 series, The Gig is Up, will screen on Wednesday, Dec. 15. The English, female-directed documentary follows the increased use of online services, specifically focusing on the stories and struggles of the workers behind the tech revolution.

Bright Lights Film Series works to make their program inclusive with themes surrounding important issues, ranging from race to economics to disabilities. Each film is equipped with closed captions, making them accessible for all members of their community.