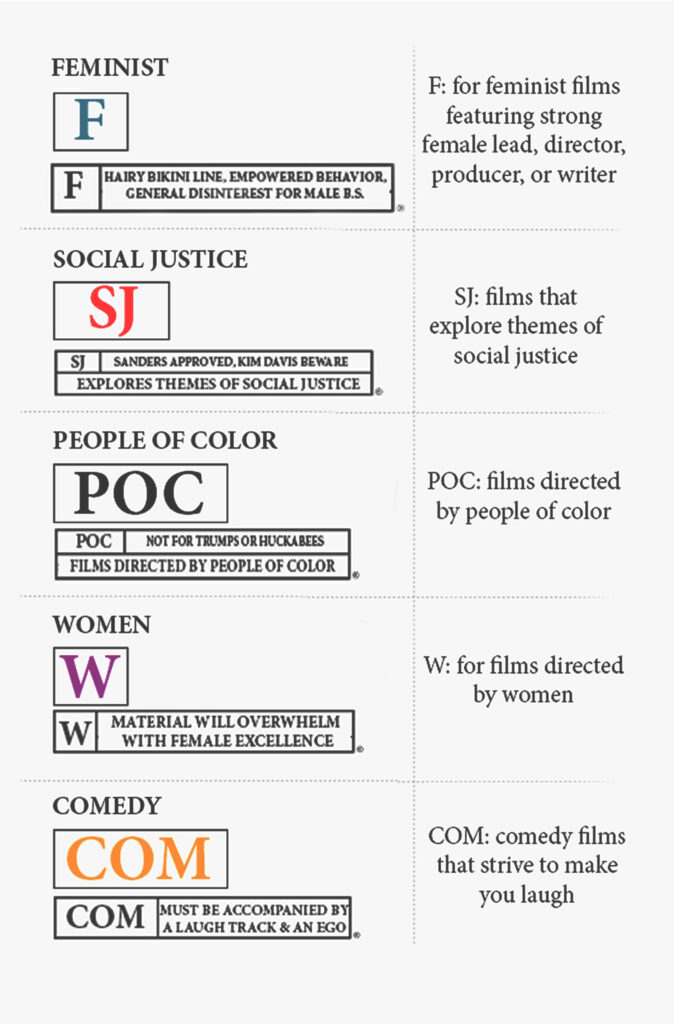 There’s a new rating system tucked in the pages of the Bright Lights Fall 2015 program—instead of classifying a picture based on the content’s maturity, it highlights its diversity.

Emerson’s Bright Lights Film Series has rated “Mad Max: Fury Road” “F” for feminist because audiences watched its female protagonist Furiosa dismantle patriarchies. “No le Digas a Nadie” is rated “SJ” for social justice because it exposes the injustices of sexual abuse of an undocumented individual. And “Amy” got a “POC” because its director, Asif Kapadia, is a person of color.

It’s poised to increase the visibility of traditionally underrepresented voices in cinema and kickstart a vital dialogue regarding the glaring absence of diversity in the film world, according to Bright Lights director of programming Anna Feder.

“There’s still a real lack of diversity on and behind cameras,” Feder said. “And a huge part of that is about asking: ‘Who’s telling these stories? Who’s the driving creative power?”

The film series is posing these questions as a move to be self-aware and critical of the industry, said Feder. And the result is a collection of five colorful tags posted at the bottom of film descriptions in the series program. It’s a small step that Feder said she hopes will create a big impact.

It started with an “F”

The ratings are adapted from the Bath Film Festival 2014 in the U.K., said Feder, which pioneered the “F-rating,” invented by festival director Holly Tarquini. The F-rating highlights films featuring a strong female lead, director, producer, or writer, according to the festival’s website. Its organizers hoped the decision would provoke a conversation about gender bias in the industry, tugging consumers’ eyes to the scant number of women shooting and starring in film.

Feder wanted Bright Lights to expand beyond the F-rating though, and she broadened the system to additionally tag films that are directed by women or by people of color, that qualify as social justice cinema, or that can be classified as a comedy program.

“It’s important to me that I’m finding films that support the dialogue that’s happening and push it forward—and a big dialogue in Hollywood is the attention on females on the screen and behind the camera,” Feder said.

Bright Lights is collaborating with Robert Amelio, director of diversity education and human relations, and Sylvia Spears, vice president of diversity and inclusion, to curate films. It’s also working with multicultural student organizations including Amigos, EAGLE, ASIA, EBONI, and Women In Motion, the production group that supports women in leadership roles, to co-sponsor and promote events.

Spears said the rating system is innovative because it both qualifies and quantifies diversity in a transparent, accessible manner, and it helps students and faculty alike to track its progress in advancing inclusivity in the college’s culture.

“We measure the things we care about,” Spears said. “If an organization or entity really wants to advance something, you will find ways to catalogue it.”

Emerson is working on expanding its diversity education, Spears said, and the rating system reflects this progress.

“It’s powerful, and ideally, over time, people will see the intersection of those identities and voices when people’s interests cross the border of their own identity,” Spears said. “Often people need to see people like themselves in those roles. It validates that it’s possible.”

Inequality in the industry

For senior visual and media arts major Lauren Cabanas, who identifies as Latin American, seeing women and people of color in leading roles behind and in front of the camera is not only important to her as a media consumer, but also as a young filmmaker.

“It’s upsetting to not see a person of your same race or gender represented in film because you want to be able to relate to the characters and the story,” Cabanas said.

Inequalities in the industry are stark. In 2012, women comprised only 18 percent of all directors, executive producers, producers, writers, cinematographers, and editors working on the top 250 domestic grossing films, according to the New York Film Academy.

The Ralph J. Bunche Center for African American Studies at UCLA released its 2014 Hollywood Diversity Report and found minorities are underrepresented on many fronts: greater than two to one among film leads, two to one among directors, and three to one among writers.

Cabanas said what’s happening in Hollywood is reflected at Emerson, too.

“The directing class I started yesterday [is] a fairly large class, but there were only like three girls in the class. It’s very bizarre and upsetting,” Cabanas said.

Jake Vollmer, the vice president of Emerson’s Women in Motion, a student production organization dedicated to pushing female leadership in film, said the new rating system is a positive change that should be expanded beyond the college.

“We don’t do enough to congratulate people who are doing a good job,” the junior visual and media arts major said regarding films directed by women and people of color. “We have so much progress to still make. It’s important to give this congratulations.”

Cinema-going is part of students’ education, Feder said, and the college’s theaters should stimulate learning, conversation, and community just like a classroom does.

“The cinema is an extension of their curriculum,” Feder said. “You can learn the technical skills, but in order to be a storyteller, you need to experience other people’s stories.”