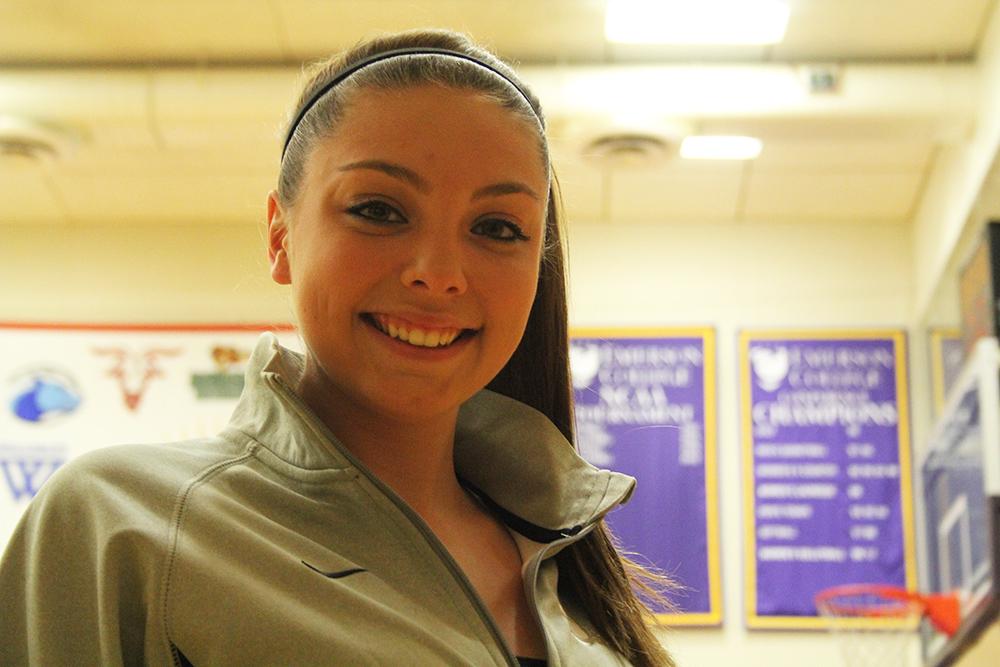 In sports, there are euphemisms for suffering a concussion that used to make it more palatable to play through — let’s be straightforward — a traumatic brain injury.

It wasn’t unusual for a player, and not necessarily just in football, to “get their bell rung” and then go back into the game after they were able to “shake off the cobwebs.”

But trained medical professionals, those personally affected by concussions, and other advocates have begun pushing back against the sentiment that it’s okay to “see stars” and return a game, urging more awareness and caution over the seriousness of brain injuries.

One leader of that movement is Emerson freshman Molly Caron, a Raynham, Mass. native and central midfielder on the women’s soccer team, which concluded its 19-game season on Nov. 2. Caron, a marketing communication major, appeared in six of those games.

As with many lifetime athletes, soccer hasn’t always been kind to her.

In October 2011, during her junior season at Bridgewater-Raynham High School, Caron was kneed in the back of the head during a game and blacked out.

She spent the next nine months recovering. Caron missed school for two of them, had chronic migraines for three, and couldn’t play again for more than half a year. Caron struggled to focus her mind and retain information she was learning in school, and she was overly sensitive to both sound and light.

Then there was the depression. Suddenly, life became a struggle.

“Oftentimes athletes can’t play their sports anymore and they can’t be with their friends, so I was slipping into a very negative state in my life,” Caron said.

She responded to the injury that briefly ruled her life by owning the issue. Massachusetts senate bill

Along with several other concussion-related endeavors, Caron is the originator of a bill, sponsored by Massachusetts state Sen. Marc Pacheco of Taunton, that would mandate baseline concussion testing — a pre-injury measure of an athlete’s neurocognitive function — in high school sports statewide.

Massachusetts senate bill 1088 was referred to the Joint Committee on Public Health on Jan. 22. Pacheco is the vice chair of the committee.

“I think it’s important because doctors without these tests are clearing athletes to go back and play on the field and they may not be fully healed yet,” Caron said, who stressed that second-impact concussions can result in severe brain injuries.

Bridgewater-Raynham did not perform baseline tests prior to Caron’s injury — it was not required to by law, which she said complicated the diagnosis for Dr. Dan Muse of the Signature Healthcare Brockton Hospital, who treated Caron.

“He was giving me the post-concussion test and didn’t have anything to compare it to,” Caron said.

The first person Caron recruited to help her was state Rep. Angelo D’Emilia of Bridgewater, and although she did not participate in writing the legislation, Caron said the idea originated with her and its final language is being negotiated right now. She hopes the bill will come to a vote soon.

She did help in another way: testifying at the Massachusetts State House on Sept. 10, when she shared her story.

“There were also other athletes and athletic trainers and athletic directors that were in full support of what this law would do for the rest of our state,” Caron said. “It was really humbling for me to be there and see everyone in support of this — that my little idea has turned into something that’s so great.”

Along with Pacheco and D’Emilia, Senate President Pro Tempore Richard T. Moore is the third petitioner of the bill, adding even more weight to the movement.

The bill would amend a 2010 law that requires all athletes participating under the umbrella of the Massachusetts Interscholastic Athletic Association to receive medical clearance before returning from a concussion. Strides at Emerson

Emerson, too, has been a forerunner of attention to concussions, according to the college’s head athletic trainer Mandy Nicoles, who, this year, was the recipient of the Eastern College Athletic Conference’s annual Dr. Donald Grover Memorial Award, which recognizes outstanding athletic trainers. The ECAC is the country’s largest athletic conference with over 300 member schools.

Emerson already performs baseline tests on all incoming freshman and transfer students participating in contact sports, as recommended by the Centers for Disease Control. Players on other teams like tennis and cross-country with a history of concussions are also flagged for special attention.

“I’ve been contacted by numerous schools, both in the Great Northeast Athletic Conference and in our new conference, the New England Women’s and Men’s Athletic Conference, asking for our protocol,” Nicoles said. She said the only measure required by the NCAA is for student-athletes to sign a concussion waiver. “It sounds like people are trying to catch up to what we’re doing.”

Every incoming Emerson student in sports with a moderate risk of concussions — soccer, volleyball, basketball, baseball, and softball — is also required to watch an educational PowerPoint and a segment from the ESPN newsmagazine show E:60, which profiled a former college football player at LaSalle University named Preston Plevretes. After two concussions in succession back in 2005, Plevretes is still trying to recover his ability to speak.

“What I tell student-athletes is, you have two wrists, you have two feet, you have two knees, you have two elbows, you have one brain, and it controls everything,” Nicoles said. “So, returning to a sport two or three days early because you just really want to play, is that worth risking permanent brain damage?”

If a player does suffer a concussion, Nicoles said that within 24 to 48 hours they will be administered a 25-to 30-minute computer test referred to as Immediate Post-Concussion Assessment and Cognitive Testing (ImPACT).

Concussed athletes then have to complete a 25-question survey daily or sometimes twice a day, rating his or her symptoms on a scale from zero to six.

Nicoles said that Emerson’s protocol is to monitor the student-athlete for another 24 hours after they’ve become symptom-free. They’ll then spend two or three days doing light cardio on an exercise bike. The next step is running and sport-specific drills, followed by taking part in half of a practice as a non-contact player. Only after those steps can an athlete return to full practice and see live action.

“We like to alert the student-athletes’ parents as well as the health and wellness staff,” said interim athletic director Stanford Nance, who said he is personally notified of each concussion. “I think the communication part of it is done really well.”

Women’s basketball head coach Bill Gould said he has noticed a “pendulum swing” toward being overly cautious about concussions, a trend he’s happy to see.

“Years past, nobody had a concussion,” Gould said. “Obviously, literally there was, but nobody [was diagnosed with] one and we saw the result of that.”

According to Nicoles, a simple concussion is one whose symptoms last one to two weeks, while a complex concussion, like Caron’s, needs long-term recovery.

Since joining the NEWMAC, Emerson has seen a spike in diagnosed concussions. Nicoles said she has diagnosed 14 or 15 concussions since the start of the fall semester, which is double the amount recorded over the entire 2012-2013 academic year.

Nicoles said the women’s soccer and volleyball teams each had four or five concussions, while men’s soccer had three. Both basketball teams are still in their preseason, but have already been hit with three concussions between them.

Women’s volleyball coach Ben Read dealt with four concussions this fall, but said his team’s have all come via freak accidents, and not as a result of opposing teams.

Sophomore marketing communications major Katie Towey confirmed that she was the women’s volleyball player to receive a complex concussion. Towey said she suffered her injury during a preseason practice after a teammate hit her in the right temple with an errant ball.

According to Towey, she had previously suffered a minor concussion during a basketball practice in her junior year at Portsmouth (N.H.) High School.

“I didn’t take the time to recover like I should have, so I think that’s what prolonged it,” said Towey, who didn’t play in her first match until over seven weeks into the volleyball season. “I just had headaches all the time and I couldn’t concentrate.”

Towey added that she should have more closely followed Nicoles’ instructions to limit stimulation like television, computer, and cell phone activity.

Nicoles oversees all sports-related athletic training, but deals specifically with the baseball, softball, and men’s and women’s soccer teams.

“Our athletic trainers, the first thing that they told us was ‘Don’t get on our bad side and lie about a concussion,’” said Caron, who has not been treated at Emerson, but said she has a positive impression of the school’s protocol.

Caron was right to heed their warning.

Nicoles — who, by privacy laws, cannot reveal specific names without written consent from the player — said she had a women’s soccer player this fall attempt to hide a concussion for over two weeks, which only exacerbated her recovery.

“She is still now currently suffering from an extensive amount of symptoms,” Nicoles said. “She put her life in danger by going out there and not telling me. She played through two or three games [and] didn’t finally admit she had a concussion until the pain had gotten so bad she had to remove herself from practice. I don’t think she will be doing that again after the conversation we had.”

Tayllar Righini, who plays soccer and lacrosse at Emerson, said she suffered a concussion playing soccer her second year of high school after colliding with her coach at Salem (N.H.) High School.

Like Caron, Righini also said she blacked out, but was able to return after two weeks.

Righini, a sophomore communication sciences and disorders major, said that her previous MTBI does not factor into her playing style, and the potential for a concussion wouldn’t deter her from risking injury for a win.

Caron reported that she is mostly back to normal now, except for some lingering light sensitivity, but that she still plays with some hesitation due to the concussion.

She also wears a black, soccer-specific, padded headband made by the company Full90, which is meant  to reduce the risk of another injury.

“When I play, it’s always a thing in the back of my mind,” Caron said. “Even though soccer is a huge part of my life, I still have the rest of my life.”