Broads and brogues in Mercutio’s Dancing at Lughnasa 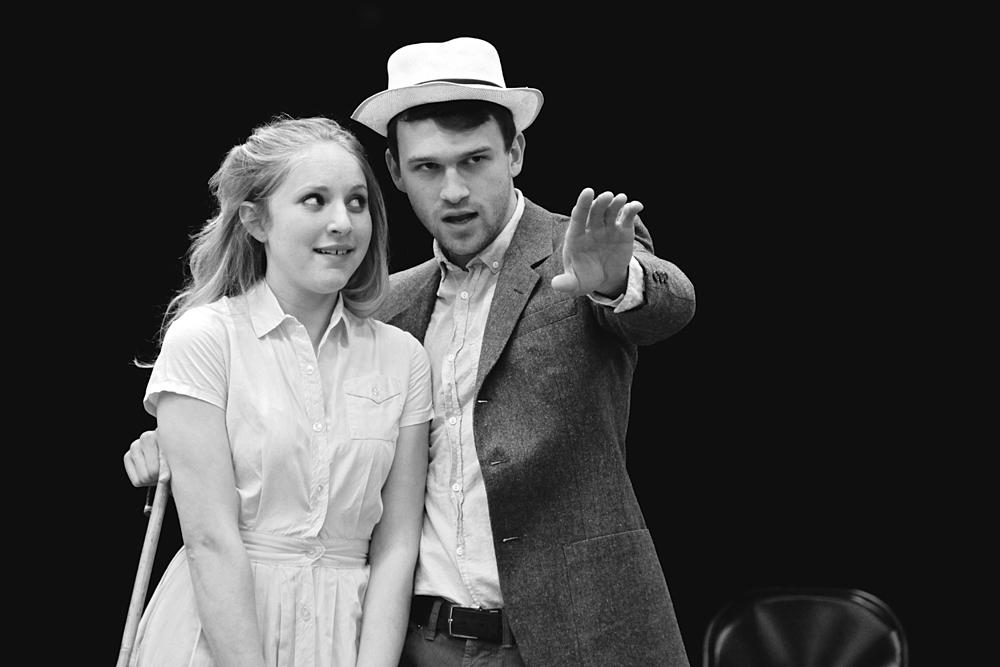 In a dark theater, a film projector hums a family’s silent black and white home movies project onto a screen. Before any lines are spoken, it is clear the performers have embodied emotionally passionate characters.

Monday and Tuesday in the Cabaret, Mercutio Troupe offered an uncompromising portrayal of family life with Dancing At Lughnasa.

The play centers on the lives of Irish sisters Agnes, Chris, Kate, Maggie, and Rose Mundy — all unmarried, living together, and in their thirties. It begins in August 1936 with the return of two individuals important to the family.

Father Jack (Benjamin Kabialis, a Beacon theater columnist), the family’s sole brother and a chaplain in the British army, has returned from Africa. Meanwhile, Chris (Lisha Brooks) has reunited with Gerry (Andrew Asper), a man with whom she had a child out of wedlock seven years prior. Their child, Michael (Mark Wolf Roberts), narrates the play from the future.

The work takes place in the confines of the sisters’ cottage and backyard. The wooden tables are worn, the radio is unreliable, and the girls’ clothes are plain cotton dresses or overalls. The plain setting gives way to an intense look into the lives of the Mundys.

“This is an actor’s play,” said director Dan Robert, a performing arts major. “And I think my strength as a director is communicating with actors. I have a very delicate eye for the performances.”

Robert is co-president of the Mercutio Troupe and said he chose this play because of the challenges it brought to him, including recreating the setting and time period in which it took place.

“The play made me nervous, which I like,” said Robert. “I think it’s important for a director to solve your material.”

“It’s so well written. It’s not that hard to bring to life as an actor,” she said..

No one character is the lead. The piece is an ensemble. A characterizing element of the show was the actors’ consistent and convincing Northern Irish brogue.

The accents come courtesy of alumna Theresa Masse, who graduated with a degree in performing arts in the spring. Masse had several one-on-one practices with the actors to perfect the dialect. When Masse could not attend rehearsal, Alexandra Allwine, who portrays Maggie, handled warm-up activities as dialect captain.

A wireless radio set owned by the sisters serves as a catalyst to the family’s emotions. Tomboyish Maggie gives a sad speech before erupting into a wild dance with her fellow sisters in the kitchen, flour covering her face and the floor. Another moment finds Agnes dancing with her crush — Michael’s father, Gerry — to Cole Porter’s “Anything Goes” before Chris shuts it off in a fit of jealousy.

These scenes of song-and-dance displayed the actors’s chemistry a result of Robert’s intense rehearsals.

“This material is very family-orientated,” said Allwine, a sophomore performing arts major. “So you have to be very careful and always trust the other actors.”

Scenes with the five sisters pulse with energy, and the chemistry between the actresses is contagious. The play is an unflinching portrayal of these five women’s struggles.

Rose (Emily Skeggs) is naïve and her sisters fear that she is being exploited by another man, the unseen character Danny Bradley. Kate (Angela Keefe) is self-righteous and bossy woman. As a teacher, Kate is the main provider for the family, but is in danger of losing her job. The play provides no easy answer to the dilemmas the Mundys face.

“It’s rare to find a play this well written for five women,” said Robert. “I hope the audience walks away hearing a voice they haven’t heard before.”