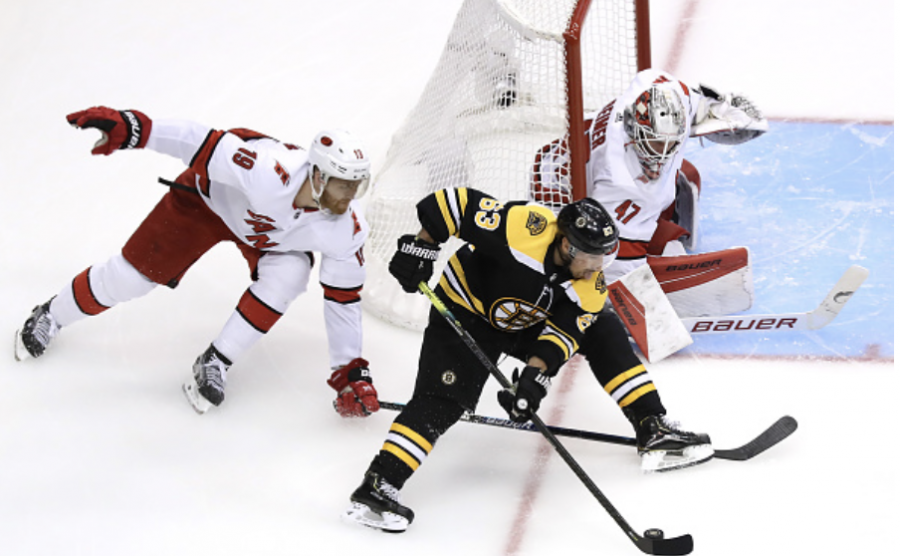 The Boston Bruins find themselves as underdogs heading into the first round of the playoffs, following three lackluster performances in the Stanley Cup Qualifiers at Scotiabank Arena in Toronto, Ontario.

Boston entered the Eastern Conference bubble in Toronto on July 26 for the NHL’s Return to Play as the President’s Trophy winners, earning 100 points in 70 games to finish the regular season as the top team in the league.The Bruins, alongside the other top three teams in the Eastern Conference—the Philadelphia Flyers, Tampa Bay Lightning, and Washington Capitals—competed in a round robin tournament, playing each team in order to determine seeding for the playoffs.

The Bruins, however, lost every game in the qualifying round, finishing with an atrocious 0–-3–-0 record and becoming the fourth seed in the Eastern Conference. Boston now faces the red-hot No. 5 seed Carolina Hurricanes, a rematch of last year’s Eastern Conference final which Boston won in a four-game sweep in the first round.

What went wrong for Boston during the round robin tournament? For starters, the Bruins scored an unimpressive four goals over the three games. The B’s powerhouse first line, nicknamed the “perfection line,” was easily the most dangerous line in the league during the regular season with left wing Brad Marchand, center Patrice Bergeron, and right wing David Pastrnak—the NHL’s joint highest goalscorer—combining for 238 points. However, those numbers did not translate to the postseason as the line only recorded one point throughout the round robin.

Additionally, the Bruins’ power play, whose impressive 25.2 percent success rate during the regular season made it the second-best power play in the NHL, was kept off the scoreboard during the qualifiers. Boston went an abysmal 0–-9 on the man advantage, according to NBC Sports Boston. This lack of offensive production doesn’t win hockey games, especially during the playoffs.

It’s apparent that Boston entered the round robin tournament with a different mindset than its three opponents. In a press conference on Monday, Aug. 10, Marchand referred to the qualifying round as “preseason,” which shows that the Bruins did not take the competition seriously. The Canadian added “the pride and the willingness to do the extra things that maybe we weren’t doing in preseason, hopefully those will be there.”

After opting to ease their way into the playoffs, the Bruins will need to do more than hope if they intend to defeat the Hurricanes in a best-of-seven series. Although they are seeded lower than Boston, I predict Carolina will win the series.

Carolina, dubbed the “bunch of jerks,” swept the New York Rangers in three games during the qualifiers, becoming the first team to advance to the playoffs. The Canes’ first line is easily the best and most exciting line in all of hockey right now. Right wing Andrei Svechnikov recorded three goals—a hat trick in a 4–-1 win against the Rangers—and two assists in the series. Meanwhile, center Sebastian Aho tallied eight points, three goals and five assists, according to NHL.com. Carolina’s fast-paced, aggressive style will cause trouble for the still-adjusting Bruins on and off the puck.

The Canes are also very defensively sound, boast depth from line to line, and have integral vetern leadership in its players like right wing Justin Williams and center captain Jordan Staal. Additionally, Carolina killed 13 of 14 penalties against the Rangers, which is troubling for the Bruins who failed to convert on the man advantage during the round robin.

If Boston fails to match Carolina’s intensity, contain the Canes’ first line, and get the “perfection line” going offensively, I see the Bruins returning to Boston after five or six games in a first round exit.