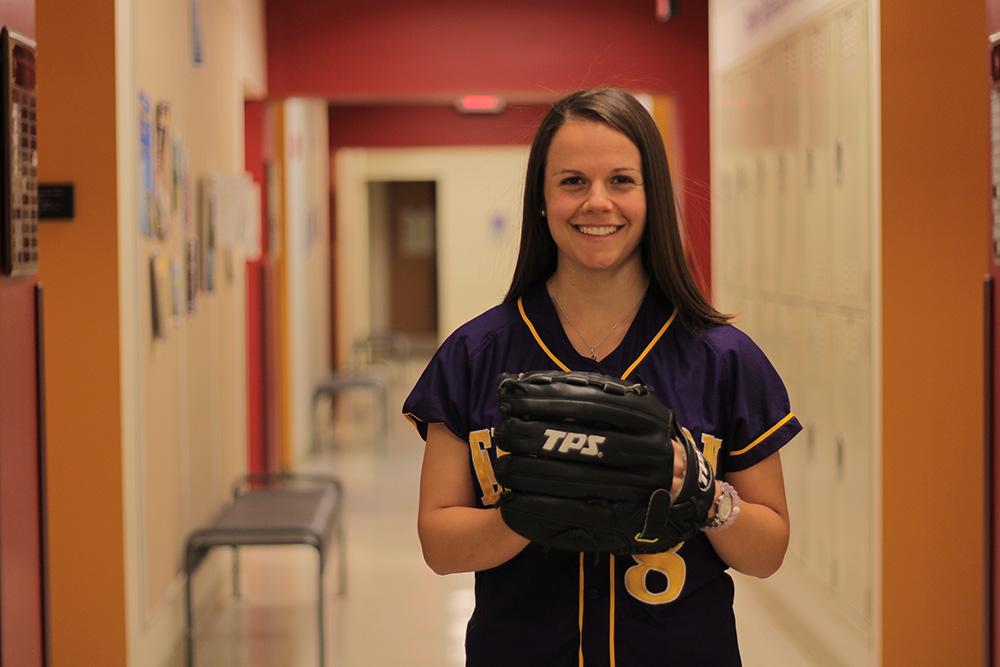 Shelby Carney is no stranger to stepping up and taking control. Not only has the junior softball outfielder been garnering praise for her on-field leadership, but her off-the-field dedication is just as impressive, according to her teammates.

Since arriving at Emerson, Carney has had one glaring mission: get involved.

During Carney’s first semester of her sophomore year, she joined the Student-Athlete Advisory Council, or SAAC. Carney said she has been working with fellow SAAC members to get the athletic program more recognition at Emerson.

Earlier this year, Carney added to her already rigorous schedule—which featured SAAC along with the grind of daily classes and softball—by joining Emerson’s Atlas Magazine as marketing director. In this position, Carney said, she is responsible for promoting the publication’s various happenings.

Although her days can be overwhelming at times, Carney said she likes to plan ahead.

“I’m a very regimented person,” Carney said. “I live on a schedule. I don’t like to stray from a schedule, actually. I kind of take what I grew up with, in that your homework gets done before you can have fun.”

Though Division III play doesn’t have the pedigree of big-name programs, it’s still a challenge. NCAA policy emphasizes academic achievement in this and higher divisions, but the rigor of a typical Emerson student’s schedule makes juggling games, workouts, meetings, and classes more difficult.

This past January, the Lions softball squad put on a free clinic at the Marina Bay Sportsplex in Quincy, Massachusetts, where younger players were able to learn a myriad of skills from McElroy’s club. Carney was heavily involved in the training.

“I really encourage our players to spend a lot of their offseason, fall, and winter to take advantages of opportunities so you can set aside some time for the spring,” McElroy said.

Not only was Carney involved in the clinic, but spends her summers coaching a club team she used to play for, the Boston Batbusters.

“It’s so awesome to work with girls and really help them to grow,” Carney said. “When they succeed, it’s just so exciting because you want them to do so well and then they finally get it and you’re like, ‘Yes, you did it.”’

Senior outfielder Amanda Horton said seeing Carney go above and beyond makes her wish she was more involved.

“It makes me want to work harder,” Horton, a marketing communication major, said. “We both play outfield, so I know that if she does something well I know I have to work harder to do that as well. Especially off the field, I hear of all the things she’s doing and all the student body and I think maybe I should have done that.”

During the season opening trip to Clermont, Florida, where Carney hit .428, she was rewarded for all her hard work by being named captain alongside senior Courtney Fee. Freshman second baseman Caroline Fortuna said the move came as no surprise to her.

“Everyone already saw them as our voices,” Fortuna, a visual and media arts major, said. “Even if the title wasn’t there, they were leaders we’d go to.”

Carney said being more vocal is something she has worked to improve coming into this season.

“Last year I didn’t let my voice be heard because I didn’t want to take over what anyone older than me was doing,” Carney said. “This year as a junior, I recognized that Courtney couldn’t do it all by herself, and I needed to help her out in leading the team because we have so many freshman and sophomores.”

Whether she’s promoting a website or rallying her team in the dugout, Carney said, it’s essential to rise to the occasion.

“Getting the experience and knowing how to work with other people is a huge benefit,” Carney said. “Things always don’t go right and there are problems and you might not have time for something, but it helps you get used to what the real work is going to be like.”

Fortuna said being around Carney every day has been instrumental early on in her own development.

“We’re a pretty young team so to have Shelby as someone we can look up to both on and off the field is kind of a calming factor for us,” Fortuna said. “I’m grateful to have her and really as time has gone on, I’ve seen her more as a leader outside the field. I knew she’d be a leader on the field, but as we started to get deep into our classes, she’s always someone we go to for really anything.”