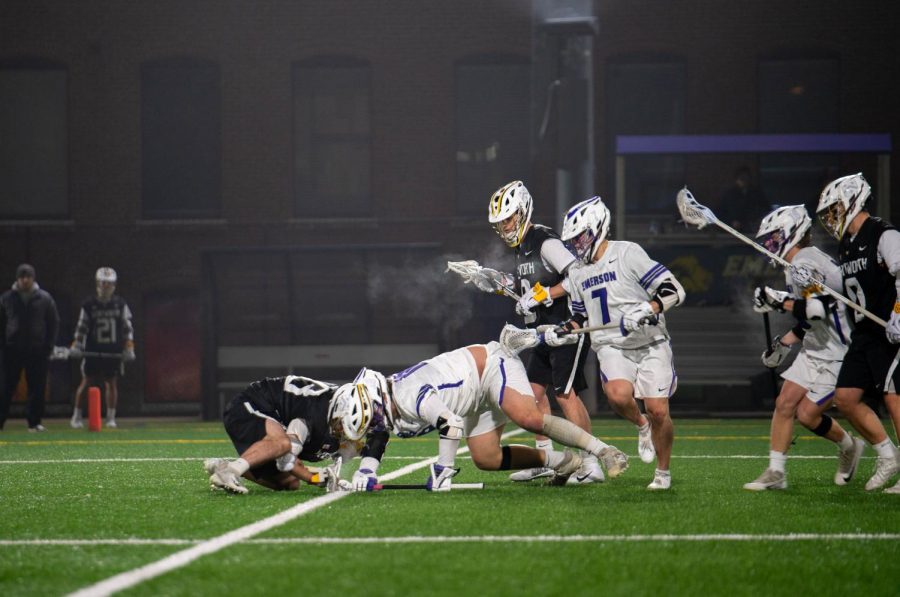 Celotto (7) scored 16 goals in five games for the Lions.

Celotto said he appreciates the recognition from the New England Women’s and Men’s Athletic Conference.

“It’s definitely an honor,” Celotto said in a phone interview with The Beacon. “It’s definitely not something I’m thinking about, but it certainly is nice to be recognized early in the season.”

The award highlights Celotto’s contributions over the course of the first two games of the 2020 season, in which he recorded five goals, three assists, and a hat trick against Wentworth Institute of Technology in the season opener. Celotto concluded the 2020 season with 16 goals and four assists. Celotto ranked third in goals and 14th in assists in the NEWMAC.

On March 12, the NEWMAC announced the cancellation of all athletic events amid the spread of COVID-19. The Lions’ next matchup against St. Joseph’s College of Maine scheduled for March 14 resulted in a cancellation.

Most Emerson students are currently home, transitioning into online courses. Celotto, a marketing communications major, returned to his hometown of Westport, Connecticut. Celotto said the town entered lockdown on Monday.

“No one can leave the house,” he said. “You’re only supposed to go out if it’s out for groceries or for a walk by yourself.”

Celotto said the unexpected cancellation of the season is unfortunate, but he still remains active.

“It’s pretty devastating, I’ll be honest,” Celotto said. “I have a net in my backyard, so I’ve been playing lacrosse.”

With the conclusion of the season, Celotto said he now spends his time doing school work and spending time with his family.

“First thing that I do when I get home is hang out with my little brother,” he said. “I love spending time with him, he’s my best friend. It was awesome to see him smiling when I got home.”

In his hometown of Westport, Celotto said he first started playing lacrosse and hockey in the second grade.

Entering high school, he attended Fairfield College Preparatory School, continuing to play both hockey and lacrosse. He played varsity lacrosse from his sophomore to senior year.

Celotto said he knew he would play lacrosse at the college level, but did not know where. He said talking to coaches and other schools about joining their programs seemed difficult.

“I talked to a lot of places but, like real offers, there wasn’t that many,” Celotto said.

Celotto said he began to see himself at Emerson after talking to head coach Matthew Colombini.

“Colombini definitely had the most faith in me out of any coach that I had talked to,” Celotto said. “He kind of knew that, like right off the bat, I could have an impact for them. I owe so much to him.”

Celotto said the team grows closer together each season.

“We have such a tight group,” Celotto said. “We have so many guys on this team who are out before practice, out after practice. We can only get better from here.”

Celotto said he toured Emerson with his family. After finding a major to pursue while receiving the opportunity to play lacrosse, Celotto committed to the school.

Before Celotto first stepped on the field with the team, Colombini said he recognized Celotto’s talent.

“We saw a really good two- way midfielder, which is exactly what we looked for,” Colombini said in an interview with The Beacon. “He’s a strong, aggressive dodger. He’s a good shooter, he kind of does it all.”

Colombini said Celotto continues to develop his skills on the field, and his overall impact on the team grows each day.

“He’s our best player, we don’t shy away from saying that,” Colombini said. “He’s our hardest worker. He’s a team first guy.”

Six new freshmen joined the team for the 2020 season. Colombini said he can rely on Celotto in both practices and games, while he focuses on coaching new and returning players.

“I know that he understands what we’re trying to accomplish on both sides of the ball,” Colombini said. “He’s very easy to coach.”

Junior midfielder Tim Doyle, who plays on the same midfield line with Celotto, said playing together over the course of the last two years has been great.

“He’s just a great player, he’s a joy to play with,” Doyle said in an interview with The Beacon. “He tries so hard, he makes everybody’s life easier on the field. He works hard on defense and on offense.”

Doyle said he and Celotto’s chemistry helps the team each game.

“We both like dodging, we both like shooting,” Doyle said. “He’s a little bit better at both things than I am, but I think we complement each other nicely. It’s just great playing with him, and I hope he feels the same way about playing with me.”

Looking towards next season, Celotto said he wants fans to come out to watch games, support the team, and get to know each of the players.

“Lacrosse is an underrated sport,” Celotto said.  “Just cause we have like a jersey on and carry around our lacrosse sticks sometimes doesn’t mean we are jocks. We’re just Emerson students like everyone else, like we love film, we love writing.”