Celtics: In defense of the Garnett Era 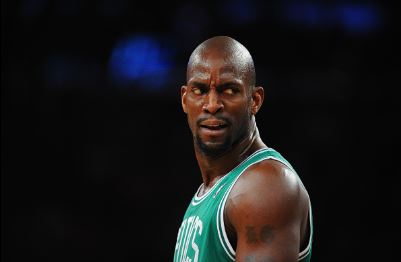 23 April 2013: Boston Celtics center Kevin Garnett (5) during game two of the first round of the NBA Eastern Conference Playoffs at Madison Square Garden in New York City, NY The Knicks defeated the Celtics 87-71 to lead the series 2-0. (Photo by Rich Kane/Icon SMI/Corbis/Icon Sportswire via Getty Images)

They are our representation of Celtic Pride, excellence through toughness, teamwork, and defense over flash. Jerseys with the numbers 34, 5, 9, and 20 are still worn everywhere from Maine to Martha’s Vineyard. They are not just the latest title team for people in their 20’s, they are the only title team we’ve seen.

The tide is starting to turn against the team nationally. For a team that only won one title, doubters say we hear an awful lot of them. They say you should at least win two championships if you’re going to act like the ‘90s Bulls. Fortunately, with Friday’s announcement that Kevin Garnett’s number 5 will be retired by the team, now is as good a time as any to take a trip down memory lane and defend their place in NBA history.

Right off the bat, the ‘08 Celtics’ resume is pretty unassailable for a single season team. A 66-16 win-loss record, a point differential over nine, and a championship is a resume fit for a top-10 team of all time. They also sported an insane defensive rating, a whole three points better than the famed ‘96 Bulls. Despite a rather shaky playoff record, it’s hard to argue they are not the best team in the time spanning between the 2001 Los Angeles Lakers and the 2013 Miami Heat.

The way in which the team came together is almost more memorable. Boston traded the fifth pick in the draft for Ray Allen and subsequently used its two stars to convince Garnett to demand a trade and sign a contract extension. One of the NBA’s worst teams in 2006-07 turned into its most star-studded in one summer, but it could have still failed to produce a title. NBA history is riddled with star-studded lineups that never lived up to expectations, such as the 2004 Lakers, 2013 Lakers, and 1997 Houston Rockets.

The saving grace of Boston’s big three is how they just fit so seamlessly. A preseason team trip to Rome forced the players to spend time together and build team chemistry, and Doc Rivers coined the word ‘Ubuntu’ as a rallying cry for them. As cheesy as it may sound, with that motto, coach Doc Rivers tapped into the lifeblood that separates the great teams from the good. The chemistry of the Celtics off the court immediately translated into games. It took other famed trios a couple of months, sometimes even longer, to really figure out how to play together and become great. The Garnett, Pierce, and Allen trio found their style immediately. They each played a role and never cared about their diminished stats. Only winning mattered to them.

Something else in their favor that often gets forgotten is just how close they came to winning the title in the following seasons. In 2009, Garnett, Pierce, and Allen played just as well as they did the year prior, only now Rajon Rondo also emerged as one of the best point guards in the league, turning a trio of stars into a quartet. The Celtics boasted a 44-11 record and looked poised to defend their title before losing KG for the remainder of the season on a fluke injury against Utah. Even without their best player and leader, the Celtics still pushed Orlando, who would go on to the finals, to seven games. The 2009 Lakers title is important in the lineage of NBA history, as it is Kobe Bryant’s first without Shaquille O’Neal, but it will always have the shadow of the Celtics hanging over it. Boston should have won, and that trophy will always have an asterisk on it.

The Celtics may have been an injury away from winning the title in 2010 as well. Even with an unusually subpar regular season, Boston rallied around Rondo, its new best player, in the playoffs and upset Cleveland and Orlando on the way to a finals where the aging C’s backed the Lakers into a corner. Up 3-2, the Celtics may have been ready to put the final nail in the coffin, but starting center and key defensive player Kendrick Perkins went down with a knee sprain after an awkward landing on a rebound. Boston played the remainder of games six and seven without him, and they lost a game in which the Lakers’ best player shot 25 percent from the floor.

Would Perkins have swung the outcome in favor of Boston? Possibly, though home court advantage belonged to the Lakers in both games, and other teams have come back and won in that situation before. Ultimately though, calling the Ubuntu team a one-hit-wonder is just misguided. It is easy to get lost in hypotheticals, and before long you’re rewriting half the championships ever won, but in the case of this team, there are two pretty glaring injuries to key players that are hard to ignore. At the very least, it’s hard to indict them for only winning one title. And plus, does it really matter? Sometimes a team catches magic in a bottle for one glorious season that lives on in the memories of sports fans forever. Does it get held against the 2014 Spurs that they never repeated, or do we all just regard them as one of the best teams to ever play? What about the 1983 Philadelphia 76ers? The point is, certain teams just have that “it” factor, and it doesn’t really matter that they couldn’t translate their success into multiple rings. For me, the big three Celtics won’t be forgotten any time soon.