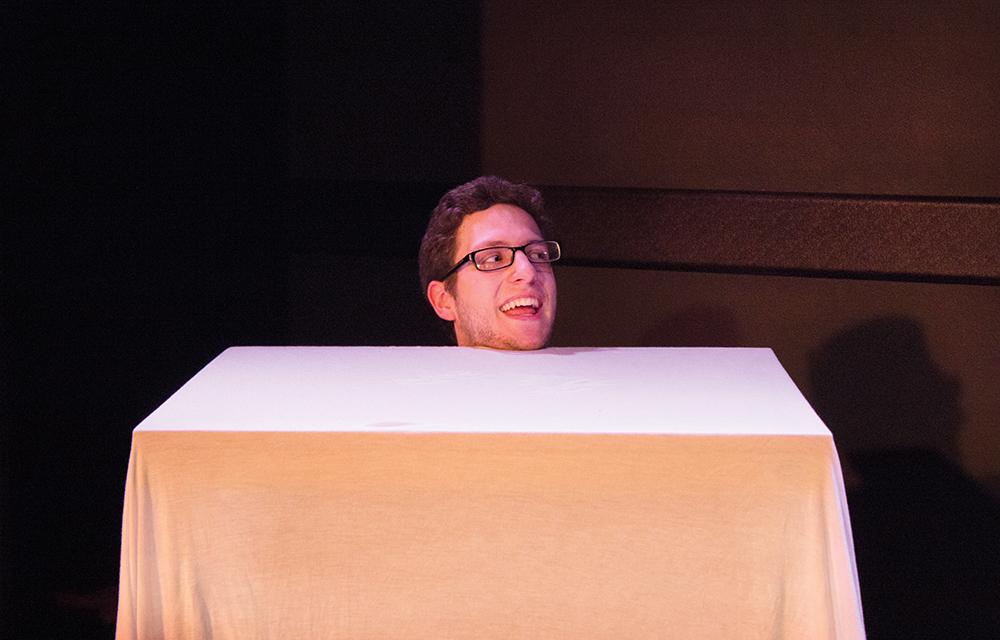 When the lights go down and the Microsoft PowerPoint turns on, Emerson students may be prone to taking out their notebooks for a lecture. But this past Monday night, Chocolate Cake City’s slideshow projection filled the room with laughter as it presented Sketch, Lies and TED Talks.

Like the Twilight Zone and Edgar Allen Poe-themed shows before, Chocolate Cake City anchored its latest performance piece around a continuous idea, this time spoofing the increasingly viral global conferences that focus on a myriad of subjects: TED Talks.

Jake Ferretti, a member of the troupe, believed the PowerPoint presentations opened a number of comedic possibilities to present to the audience.

“We liked the idea of having visual aids to the show,” said junior visual and media arts major. “And you can do a TED Talk on anything.”

On Monday night, the groups “talks” ranged from “Boobs In Cinema & Television” to “The Science & Language Of Love.”

Another sketch parodied the popular Evolution Of Dance video. For this bit, Ferretti played a magician presenting the evolution of magic with a series of cliché gags, like pulling a streamer out of his mouth, before the magician brought out someone he had clearly kidnapped and drugged as the new recipient of his trickery, all to the song “The Rockefellar Skank” by Fatboy Slim.

Ferretti, who also wrote the sketch, said he enjoys making the audience think a sketch is about one thing before completely reversing its expectations.

“My sketches are about playing with the idea of sketches because everyone has seen every type,” said Ferretti.

Allie Wittner, another troupe member, said she also enjoys Chocolate Cake City’s style of throwing a curveball to the audience, as long as it doesn’t cross the line.

“Things can’t be weird for the sake of being weird,” said the freshman performing arts major. “We like things that are absurd but with good structure, like realistic dialogue and a decent level of grounded-ness.”

Founded in 2002, Chocolate Cake City is a comedy troupe that prides itself on inverting the kind of sketch comedy audiences have come to expect thanks to shows like Saturday Night Live.

“We see that obvious structure and try to subvert that,” said Ferretti, referencing pitfalls of sketch comedy, like basing a skit around a fake talk show. “We try to avoid sketch clichés.”

In another sketch written by and starring Ferretti, he played a character hosting a campy “Theater Of The Damned” murder mystery. But before the story could begin, the sound board went out of control, providing egregious noises of babies crying and honking cars, to the bewildered laughter of the audience.

“We try to think outside the box,” said Ferretti. “Sketch comedy can be very limiting if you let it be.”

With a runtime of roughly 45 minutes, Chocolate Cake City’s show was on the shorter side of sketch comedy on campus. But Wittner argues that format choice is not a coincidence.

“It’s important to me that the audience doesn’t feel like their time was wasted,” said Wittner, “that we gave them the best quality we could. We like to keep our shows concise.”

This weekend, Chocolate Cake City will be performing at the Brown Comedy Conference, hosted by Hannibal Buress. The group’s next performance is in the Cabaret Theater on April 21.