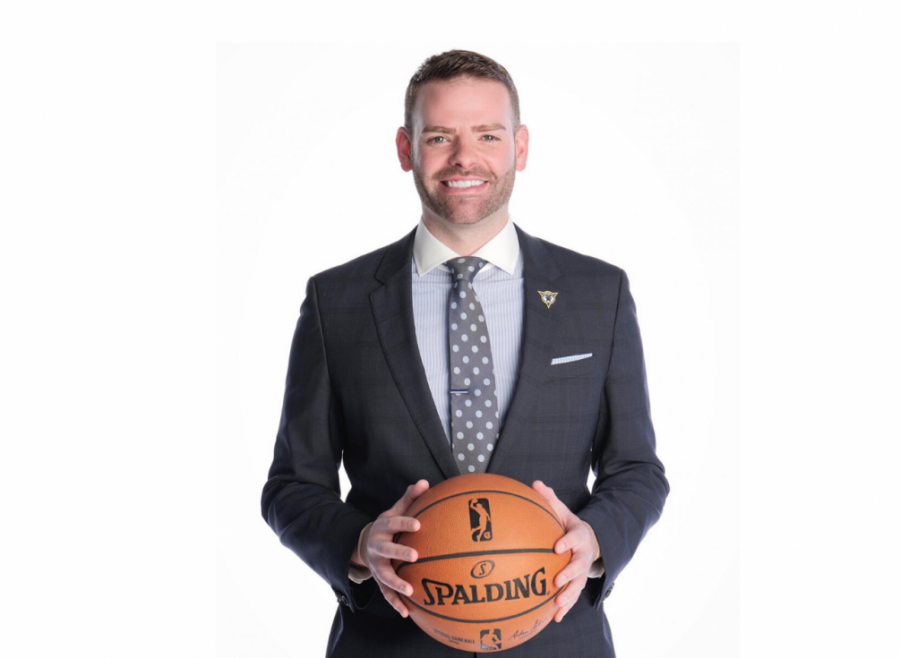 Taylor '11 became the Assistant General Manager of the Fort Wayne Mad Ants in 2019.

As the Assistant General Manager of the Fort Wayne Mad Ants, Chris Taylor ‘11 finds himself in many high-pressure situations. Whether he is discussing a potential trade with agents or talking to NBA personnel about signing a player to a 10-day contract, his job is multifaceted.

“The general manager and I like to joke that we’re like firemen,” Taylor said in a phone interview with The Beacon. “You never know what’s going to pop up on a day-to-day basis, and you’re just constantly putting out different fires. It’s very varied, but that’s also what makes it so much fun.”

Taylor works in the basketball operations side of the Mad Ants, an NBA G-League team affiliated with the Indiana Pacers. His day-to-day responsibilities include roster management, scouting, and managing the team budget. Taylor also helps players plan for their life after basketball.

Taylor grew up in Calais, Maine, with a father who loved the Boston Celtics and the game of basketball. Taylor played for the Calais High School basketball team, and he and his father frequented Boston Celtics games throughout his childhood, helping him develop a strong passion for the sport.

“The goal, for a long as I could remember, was to work for the NBA,” Taylor said. “My love for the game was instilled from my dad. We grew up playing every second of every day, all year round. Between him and my grandfather being die-hard Celtics fans, basketball was kind of in my blood.”

Taylor joined the Emerson men’s basketball team as both a forward and guard in 2007, but did not receive much playing time after suffering multiple injuries. Despite his lack of time on the court, Taylor developed a strong relationship with former head coach Hank Smith.

“I had some conversations with Smith and built a great relationship with him,” Taylor said. “He started to share some of the stories about Sam Presti, Rob Hennigan, and Will Dawkins, some of the guys who had come before us and had broken into the NBA.”

Smith said despite his many injuries, Taylor’s work ethic always impressed him.

“Although he was injured, he worked so hard to get back on the court,” Smith said in a phone interview with The Beacon. “He spent every day in the trainer’s room doing everything possible. He was as good of a teammate as you can be, especially under his circumstances. His setbacks never deterred him, and he had a fantastic attitude despite it all.”

Taylor said Smith became one of the most influential figures in his life for him and many of his teammates during their time at the college. He said Smith’s willingness to help the team with anything aided him tremendously when approaching his career.

“Smith was the most outstanding support system for me when I was at Emerson,” Taylor said. “He helped us grow up and instilled so much faith in us. Smith said that he would always help us in any way that he could.”

Although Taylor credits much of his growth to what he learned from Smith, Smith said that Taylor built his career on his own.

“This guy is a warrior,” Smith said. “He just went out and did it himself. We were certainly very close and had a great relationship. He’s a great guy, and he’s incredibly inquisitive. We talked basketball and we talked about things that happened in the NBA, but he got to where he is all on his own.”

When Taylor arrived at Emerson, he originally intended to study broadcast journalism, and often travelled with the baseball team to call games. However, he later decided to change his major to marketing communications and pursue a career in the NBA.

“I thought my niche to break into the NBA was through the business or marketing side because jobs in basketball are so few and far between,” Taylor said. “I thought choosing this route would be my way to get my foot in the door.”

Taylor began an internship with the Celtics in 2008, where he aided the team with corporate sponsorships and promotions. Taylor also used this position as an opportunity to network.

“This internship was an incredible experience that only further influenced my desire to make this a lifelong passion, career-wise,” Taylor said. “I had the chance to be in the [TD] Garden pretty early on game day. I would go and introduce myself to as many people from the visiting team as I could to self-network and make it known what my goals were. I tried to learn as much as I could from each of these teams.”

Taylor moved back home after graduation after struggling to find a job with the NBA lockout in 2011. Later that summer, Taylor received a call from a former ball boy he met during his internship with the Celtics, who asked him if he had any interest in working for the Maine Red Claws, an NBA D-League affiliate team in Portland, Maine. Taylor said he immediately jumped at the opportunity and travelled to Portland a couple of days later.

“I did everything in my time there,” Taylor said. “I helped sell tickets, I was even the mascot a few times. Whatever came about, I was eager to do it in hopes it would position me for better advancement in the future.”

After Taylor worked in game day operations for a couple of weeks, a position opened up in the basketball operations department. With his prior experience playing basketball and good reputation within the organization, Taylor assumed this role and continued working with both positions.

Taylor said this opportunity helped him realize he did not have any interest in the business side of basketball. He strictly wanted to work with aspects such as roster management, scouting, player personnel, and player development.

After spending the 2011-2012 season with the Red Claws, Taylor became a basketball operations intern with the Indiana Pacers. He landed the internship through a connection he made during his senior year at Emerson.

“As cliche as it sounds, it’s true in any business—at a certain point, it comes down to who you know,” Taylor said. “In the NBA world, Emerson is well known amongst every team because so many front office personnel went to Emerson.”

Taylor said he gained many of his career opportunities because of his constant networking efforts during his time at the college. He said a key part of networking is establishing mutually beneficial relationships.

“Try to recognize your opportunities,” Taylor said. “It’s not just about making a connection that could benefit you, it’s trying to make it a two-way street. It’s about actually engaging in a conversation and asking questions. That’s how you really establish a relationship that could last for years.”