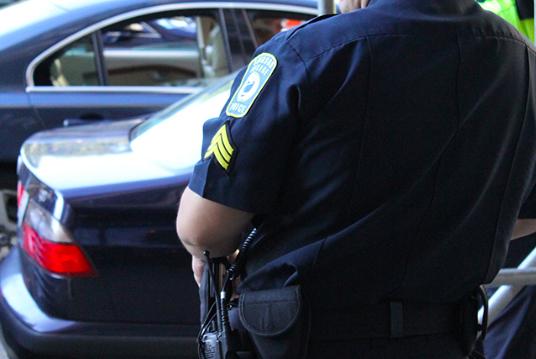 Emerson College police officers can be seen patrolling the campus and responding to crimes, but what students don’t see is officers compiling statistics of every crime that happens at the college.

The Clery Act sets nationwide standards for college crime reporting; the goal is to ensure that no offense goes unreported. Deputy Chief Eric Schiazza, who manages Clery reporting at the Emerson College Police Department, said that before the law there was no structure to follow, and things could more easily go unreported.

The act—which is officially the The Jeanne Clery Disclosure of Campus Security Policy and Campus Crime Statistics Acts—is named after Jeanne Clery, who was raped and murdered in her Lehigh University dorm room in 1986 when she was 19, according to the Clery Center for Security on Campus’ website. Clery’s parents turned to the Department of Education to prevent the situation from happening again in the future. The result was the Clery Act, which was initially approved by Congress as the Crime Awareness and Campus Security Act of 1990. The act was later renamed in Clery’s memory in 1998.

Schiazza said that crimes can be reported to ECPD or to a “Campus Security Authority,” which is any college employee who is directly responsible for student activities, including resident assistants, sports team coaches, and chairs of the student conduct board.

“I think about [the Clery Act] in my sleep,” said Schiazza. “I’ve actually woken up thinking about something I need to do for the report. It’s important to me.”

Jason Meier, the director of student activities, has been a Campus Security Authority since he joined Emerson in 2011. He said that holding the position means he has to report any crime that’s brought to his attention.

“When I’m in a meeting with a student and I can tell they’re about to tell me something I need to interrupt them and say, ‘Just to let you know, I can do my best to protect your privacy, however I will have to fill out a CSA report and report this to ECPD,’” Meier said.

Meier said that he usually fills out two to three reports a semester.

Crimes that must be reported, according to the Clery Act, include murder, sex offenses, robbery, aggravated assault, burglary, motor vehicle theft, manslaughter, arson, hate crimes, and arrests due to liquor laws, drug-related violations, or weapons possession.

The Clery Act calls for institutions to define the geographical area they will be reporting these crimes on under four categories: campus, non-campus, residence halls, and public property. Emerson has three campus areas—in Boston, Los Angeles, and Well, Netherlands––according to Schiazza.

Non-campus properties are those that the college rents, like Emerson’s offices at 99 Summer Street in Downtown Crossing, Rotch Playground and Field in South Boston, or the presidential residence in Beacon Hill. Schiazza said the Boston Campus of the college doesn’t offer any housing options outside its four residence halls, so they make up that category in entirety.

Public property is defined as the sidewalk in front of a campus building, the street, and then the sidewalk opposite to the building, according to Schiazza.

The Clery Act also mandates that when a crime that’s been reported to Emerson could affect students, students must be notified of the situation.

For example, when two Boston Park Rangers were stabbed during a field interview on Boston Common on Oct. 14, 2014, students were alerted of the incident.

Schiazza said that the college has an emergency notification system, or ENS, to alert Emerson community members of emergency situations.

“Setting up the ENS wasn’t a reaction to the Clery Act, but an accepted best practice in campus security,” said Schiazza.

According to Emerson’s website, the college’s ENS is called Blackboard Connect, and it can send alerts to students, faculty, and staff through phone calls, emails, and texts. The company that provides this service, Blackboard, also used to host Emerson’s course management software before the college switched to Canvas in 2013.

Schiazza said that students would recognize those “blasts” from the weather cancellation messages of this semester.

Emerson tests its ENS twice a year, according to Schiazza. The Clery Act requires a test annually.

Schiazza said the decision to send out a notification is made by the emergency management team who usually meet and draft the message. This team includes President M. Lee Pelton, ECPD Chief Robert Smith, and seven other administrators, according to a Feb. 15 email.

ECPD has the authority to send out alerts without consulting the team in dire situations. Schiazza said that the only time he can remember ECPD doing that was during the Boston Marathon bombings.

Crimes that aren’t as urgent need to be available to the public as well, according to the Clery Act. Institutions are required to keep a daily log of every crime that is reported on campus. These logs include the time, location, and type of each crime.

Schiazza said Emerson’s crime log includes everything that is reported to ECPD, not just those on the college’s official campus. The college also keeps a fire log.

Emerson is required, under the Clery Act, to have each log available to the public within two business days of its occurrence.

Schiazza said that seven years of the crime log for the Boston Campus, in physical books organized by year, are available at the ECPD dispatch center to be viewed by anyone.

Along with the individual logs, institutions have to compile an Annual Security Report, due Oct. 1, for each campus and notify community members when it is published. The report is also sent to the U.S. Secretary of Education. According to the Clery Act, the report must compile the institution’s policies, crime statistics, campus authorities, and safety programs it offers.

In Emerson’s latest security report, which was released last year but covers incidents in 2013, the college reported 10 cases of sexual violence and 99 drug law violations.

“We try to put focus on programs that have been well-received,” said Schiazza.

Schiazza said that the process for creating the annual report is extensive.

“Generally, we start working on the annual Clery report as soon as the last one is published,” said Schiazza. “It’s an ongoing process.”

The report is not put together solely by Schiazza. The general counsel, Kasteel Well employees, staffers from the Office of Housing and Residence Life, and other administrators around Emerson also contribute, although Schiazza said he is the main point of contact for the report.

Betsy Facher Rauch was the associate general counsel for Emerson for just over 10 years. In that role, she said she provided legal advice to ECPD regarding how to report incidents in accordance with the Clery Act. Facher Rauch said she cannot disclose what specific advice she gave.

Since March 1, Facher Rauch has held the position of interim Title IX coordinator. She said she now works with providing statistics for crimes regarding sexual assault, sexual misconduct, dating crimes, and stalking that occur on campus.

Facher Rauch said that the statistics don’t include names or locations, other than “on-campus,” to protect those involved.

“We can keep these [situations] private, but not confidential,” she said.