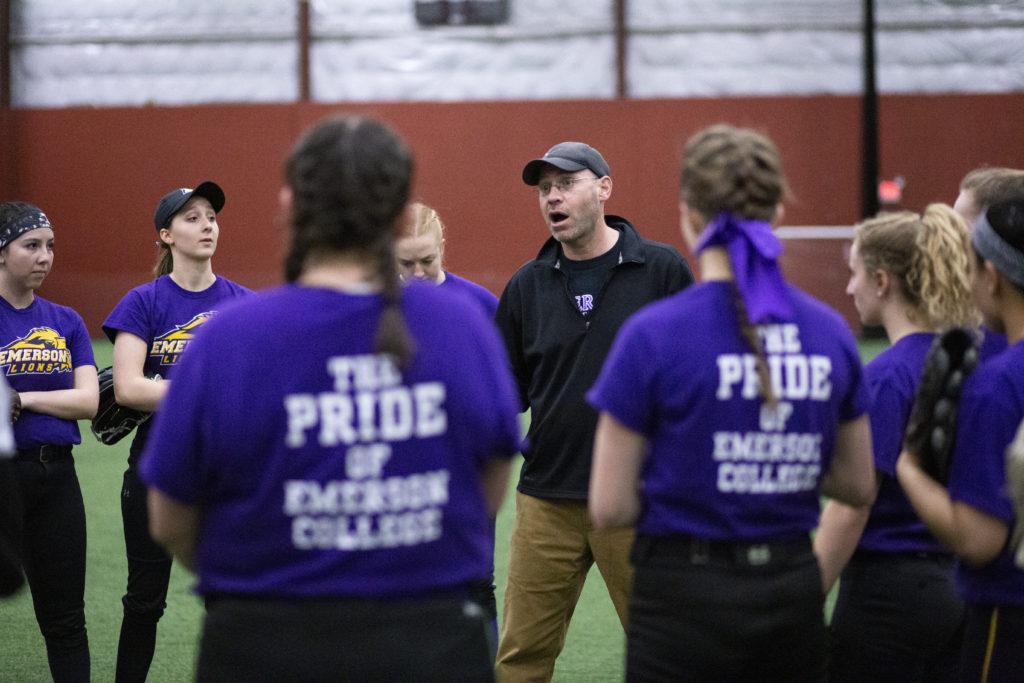 Softball head coach Phil McElroy (center) is one of many coaches who developed an online recruiting approach.

In a typical year of recruiting for Emerson sports teams, prospective student athletes visit the campus, meet with coaches, watch a team game, and even stay in dorms overnight with a player. But during the pandemic, coaches have turned to nontraditional efforts to attract potential players.

The majority of recruiting is now done online. Recruits are unable to enter college buildings, so the in-person extent of the recruiting process is limited to walks down Boylston Street and nearby areas of Boston.

“It has been much more phone and Zoom-heavy, and more virtual visits online,” men’s lacrosse head coach Matt Colombini said in an interview. “We have done some socially-distanced visits to the exterior of campus, walking around the Common, showing off Boston, but obviously with where we are with our rules, we wouldn’t bring anyone into a building.”

There were a few showcases and games for coaches to attend this summer with social distancing guidelines in states that are not considered high risk.

”There ended up being a lot of events this summer, and there were limited attendance rules depending on location,” Colombini said. “We got more film than we’ve ever gotten in terms of full games and recruit booklets and kind of everything you get in person.”

Emerson instructed coaches to not bring prospective student athletes into campus buildings while showing them around campus. With this limitation in place, the softball team has found innovative ways to safely introduce recruits to campus facilities.

“What we’re doing is sometimes meeting student athletes on the Common,” said softball head coach Phil McElroy. “I am pointing to a building, and then we have a current player on a camera to show the prospect what’s going on in the building and what it looks like.”

McElroy said some high school teams are creating a more immersive recruiting experience by live streaming their games and scheduling Zoom calls after coaches watch them.

“It’s been more work than it was before because you could see the player and then talk to them right after the game,” said McElroy.

“The virtual tour that the school’s done on Zoom is really well done, and I think a lot of our recruits really appreciated that,” said Vennochi in an interview. “Obviously, a lot of the guys can’t get here, so it’s going to be a weird year, but hopefully we’re giving them enough of a touchpoint on campus even if they can’t see us in person.”

“Actually coming to the school and seeing the school for myself and not just pictures online was probably the most important part of my recruiting process,” said Cosgrove in an interview. “I didn’t really know the specifics of what I really wanted in a school, so actually visiting and coming on campus, meeting the team, being with the players, being in the city, and kind of just experiencing life as if I was a student is what sold me on coming here.”

Although his overnight visit played an integral role in his decision to attend Emerson, first year men’s basketball point guard and shooting guard, Trevor Arico, believes recruits will still be able to experience everything Emerson has to offer.

“It’s crazy to think about how much of that stuff a [first year] coming in next year wouldn’t be able to do now,” said Arico in an interview. “At the same time, I know our coaches and players are such great guys and great people, and they will find a way to show off the school because it is a great school and you can figure that out whether you come into the building or not.”

Without the ability to meet team members in person, the softball team hopes to host a Zoom call and give potential recruits whatever insight into being an Emerson student they can.

“We’re actually setting up an evening coming up for a couple of hours where we’re going to invite people to a Zoom call where we’ll have our current players and kind of walk them through what a day in the life of an Emerson athlete is,” said McElroy.

Ironically, prospective student athletes have actually felt the urge to commit early to their respective programs.

“They’ve been more eager to commit and want to get a commit out of us as a coaching staff,” said McElroy. “Part of that is just because they haven’t seen as many coaches at their games.”

Vennochi said the baseball team has taken advantage of the extra time to recruit prospective players, since the pandemic moved them off of the field in March.

“We as a staff have taken advantage of the extra time we have had to recruit because we were home at a time when we probably wouldn’t have been in March and April when we would be focused on our season,” said Vennochi. “We got a lot of our early conversations with guys.”

Colombini, despite everything, is confident the 2021 recruiting class is the best the lacrosse team has had in his time at the college.

“This has been the best class in terms of volume, talent, geographical diversity, kind of the whole deal,” said Colombini. “Maybe it’s a coincidence, or maybe we just kind of got lucky and did it the right way or figured something out, but I’m really excited about this group and what they can bring.”

McElroy is excited about the talent he’s been able to find in his upcoming recruiting class.

“I think it can be one of our best classes,” said McElroy. “Division III [schools] can do a little bit more than some of the other schools right now, so I feel like we’re getting some Division I talent that are looking at Emerson.”