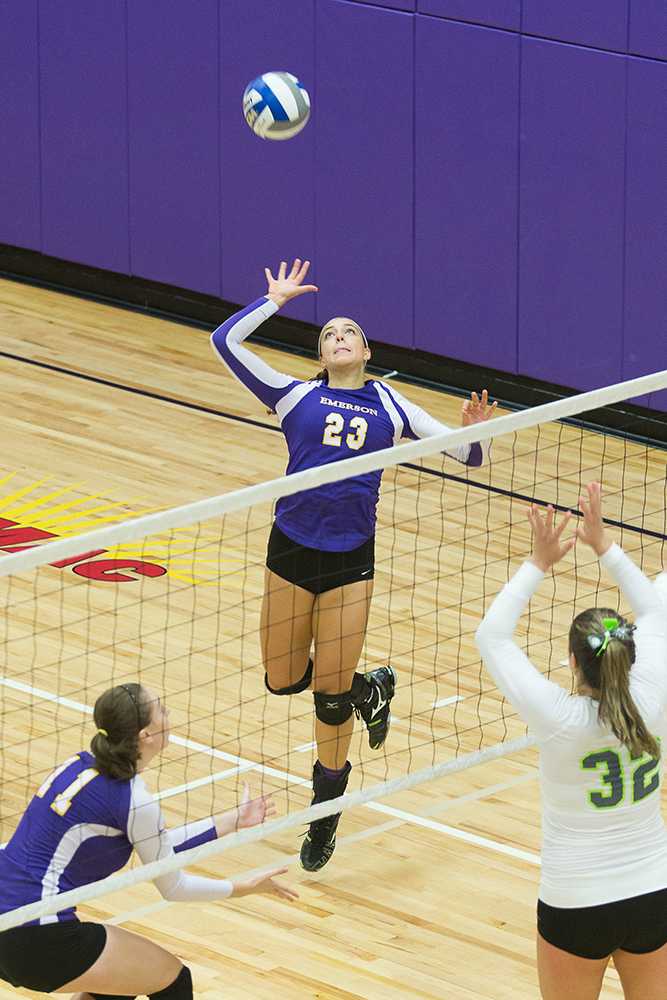 In high school, Fara Cohen was a competitive swimmer and had never thought of playing volleyball until a friend talked her into attending a 7:00 p.m. practice. From there, Cohen said she fell in love with the game.

Cohen now ranks in the top 10 in the New England Women’s and Men’s Athletic Conference, or NEWMAC, for kills, sets, total attacks, and points.

Cohen, a freshman marketing communication major, is making quite the impact on and off the court for the Lions, according to her coaches and teammates.

“She’s added mostly skill as a dynamic outside hitter,” Frendak, a setter and defensive specialist, said. “But her personality and the team player mentality has helped on and off the court.”

Cohen said going from playing for a high school in a town with a population of just over 18,500 people to a Division III sports team was a big shift.

“In high school some of the girls are there for different reasons, some of them are really competitive but others are there just to stay in shape or with their friends after school,” Cohen said. “But in college, everyone is choosing to be here because they have a passion for [volleyball]. It creates a great environment at practice.”

Cohen now controls the role of starting outside hitter on a young Lions roster that only carries two seniors, but said the returning players have been helpful for the newcomers.

“All the upperclassmen have been so welcoming to us by helping us freshman make the transition onto the team and the school delightful,” Cohen said. “They are very encouraging to us. It helps you be able to play with confidence and up to your full potential.”

Frendak said starting as a freshman can be a daunting task for many, but Cohen has handled it well.

“[Cohen] has come in and played to the best of her ability in every situation,” Frendak said.

Cohen said in high school, Emerson was one of her top schools and was on her mind during her junior year. Not only did Cohen want to pursue volleyball in college, she said, but she wanted to make sure she was able to get a dual experience: state of the art education and competitive volleyball. Cohen reached out to head coach Ben Read that same year.

“Just looking at her initially, I thought [she was] athletic and thought she had a lot of potential. I got to see her play in video first and then in the AAU, [Amateur Athletic Union], down in Florida,” Read said. “I definitely liked what she could bring in [athleticism] to our team.”

As the Lions’ season progresses, Coach Read said he isn’t expecting anything out of the ordinary from Cohen.

“We’re still trying to figure out ourselves right now and what each individual is going to contribute to our team and our overall goals,” Read said. “With [Cohen] I think it’s just slowly improving in all aspects of the game and hopefully she can be someone we can rely on in a larger capacity.”