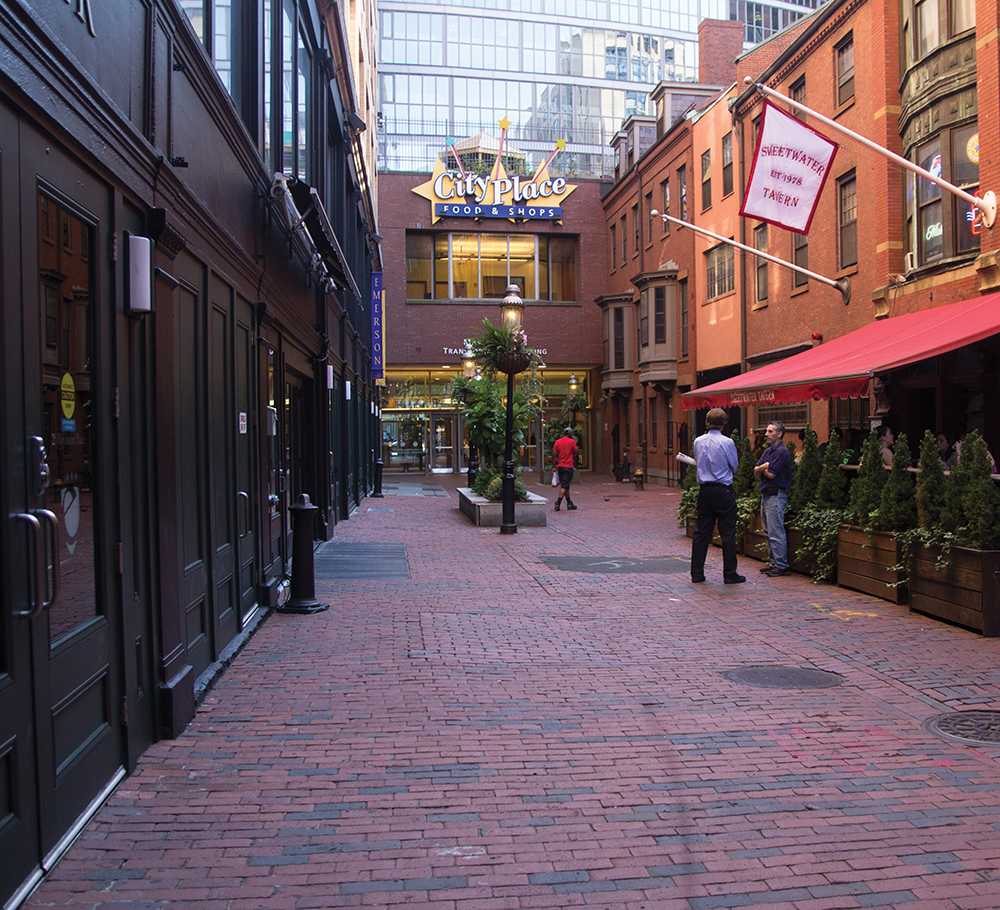 Instead of stepping into the bar of the Sweetwater Tavern for a pitcher of beer, students could be walking into a new 18-story, residence hall with a roof terrace and views of the Boston Common and the State House by Spring 2016.

On August 26, Emerson College submitted a report to the city on a proposed project at 1-3 Boylston Place to transform the existing four-story, 24,000-square-foot commercial properties into an 18-story, 89,900-square-foot residence hall.

The 1-3 Boylston Place residence hall could be the tallest campus structure at 171 feet tall, rising over the Walker Building and Piano Row. Rooms would have a suite-style set-up, similar to the Paramount Building’s layout said Margaret A. Ings, Emerson’s associate vice president.

The LEED Gold-certified building would only be used for residential purposes and, according to design renderings detailed in the report, would display a contemporary style of architecture using materials like brick terracotta and reflective glass on the exterior of the building.

The need for a new residence hall stems from the college’s desire to repair the Little Building’s exterior and interior structure.

“The Little Building has done the majority of housing for our students, but now it needs to be fixed,” said Ings,  at a Sept 3 community meeting held at the Hyatt Regency Boston, where the college presented the development proposal to the neighborhood.

Built in 1915 as an office building and converted to a dormitory and dining hall in 1995 by the college, the Little Building’s need for repair and restoration is recognized by the college community.

“I’m happy to see the LB will be repaired,” said senior performing acts major James Murray. “If they can get rid of the scaffolding it would be great.”

The construction of the new Boylston Place dormitory and the repairs to the Little Building are expected to begin in Spring 2014 and Summer 2014, respectively, according Ings.

“The new residence hall will provide replacement housing for 407 students currently living in the 750-bed Little Building dormitory while repairs are being done on this building,” wrote Ings in the letter introducing the report, known as Project Notification Form.

The city requires the form, which is subject to public review, for large construction projects. A Project Notification Form describes in detail features of the building plan such as floor layouts, design renderings, and the transportation and environmental impacts the construction would have on the neighborhood.

“LB needs a rejuvenation and a chance to be cared for,” said Melissa Obleada, senior marketing communication major. “But I feel bad for the small businesses.”

The fate of Sweetwater Tavern and the Estate nightclub is uncertain, but the college is currently in contact with the two establishments, said Ings.

Obleada said said she regularly hangs out in Sweetwater Tavern, and enjoys its proximity to school.

“It’s nice to have a close by bar and restaurant that can be a regular place for Emerson students,” she said.

Sweetwater Tavern and Big Night Entertainment Group, the managing company of Estate, declined to comment on the project.

Ings said that repairs to the Little Building could take at least five to seven years to be completed, and the new dormitory is expected to be ready for occupancy in Spring 2016.

Emerson does not expect to increase or decrease enrollment during construction or after both projects are completed. With approximately 400 new beds, the college hopes to increase its housing capacity to 70 percent of the student population, according to Ings.

According to the Project Notification Form, the construction of the new residence hall will require the demolition of buildings 1-3 Boylston Place, but the college plans to preserve the façade of 3 Boylston Place because the project’s architects find historical and architectural value in the façade’s copper bay windows and the Romanesque Revival style of the building.

Initially, the college proposed to build a 280 foot high structure located at 1-6 Boylston Place that could house 750 students and include a dining facility, a fitness center, an equipment distribution center, and the Emerson Police Department, according to a letter of intent filed to the Boston Redevelopment Authority on June 5.

However, the Boston Redevelopment Authority did not support the plan and told the college to scale down the project to 171 feet, said Ings at a September 3 neighborhood meeting held at the Hyatt Regency Boston. As a result, the Tavern Club, partners in the project and owners of 4-6 Boylston Place properties, decided to terminate their partnership because they found the lower height discouraging to their enterprise, according to Ings.

The filing of the Project Notification Form is only the first step of a process that could lead to certification by the city for implementation of the project as outlined by city code.