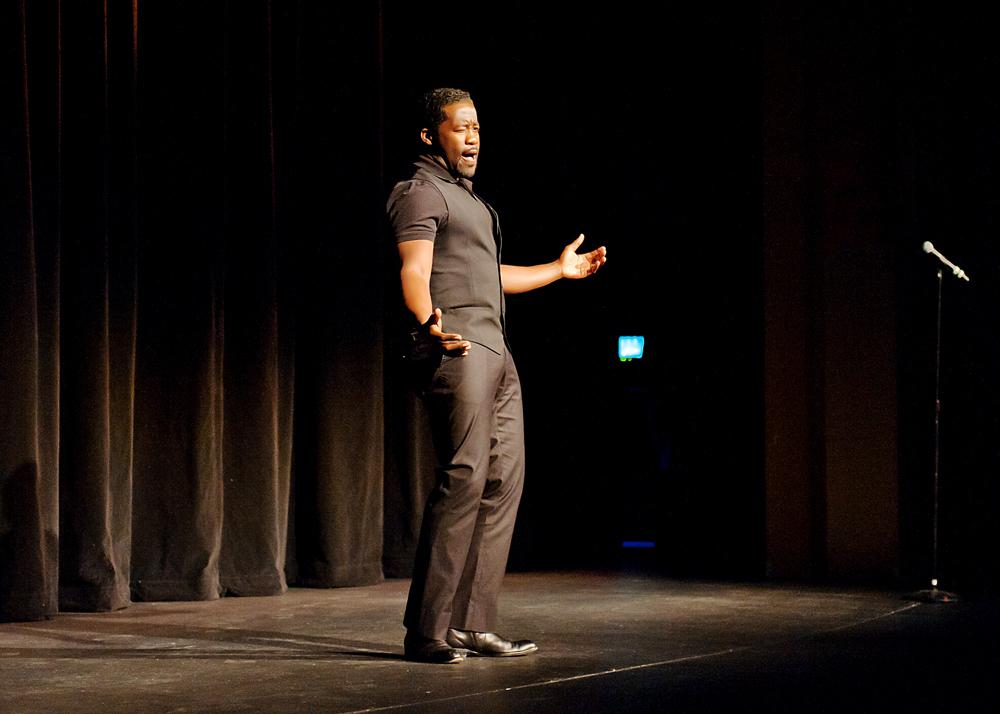 On Tuesday, March 25, Emerson College announced a three-year civic engagement program and artist residency with writer and performer Daniel Beaty, funded by a $350,000 grant from the Barr Foundation.

The news followed a one-night performance by Beaty on the Paramount Mainstage in which he acted out excerpts of his play Emergency and read from his new book Transforming Pain To Power.

The Barr Foundation’s grant will keep Beaty at Emerson from July 2014 to June 2017. The foundation’s goal is to support leaders who enhance educational and economic opportunities in Boston, according to it’s website.

Just last month, the Barr Foundation awarded ProArts — which Emerson College is a one of six members of — $140,000.

As part of his partnership with the college, Beaty will introduce “I Have A Dream: Boston,” a program where Beaty said he hopes to bring the power of performance to help both Emerson students and the Boston community at large discover their voices and potential.

“He will strike a chord with many black men and other people who feel they may not have any hope left,” said Kelly Bates, executive director of the Elma Lewis Center, Emerson’s civic engagement hub.

Bates said the center will help Beaty identify the youth and adult communities in the city that will most benefit from dealing with their issues through performance.

The goal, according to Bates, is for Beaty to inspire the community at large.

“They will be able to tell stories like Daniel, but in their own authentic voice,” she said.

His collaborations with the community will be based on the themes present in his new book. And many of those themes were present Tuesday night, as Beaty recounted an uneasy childhood. Almost born in jail due to his parent’s ties with a gang, Beaty grew up with a father who became addicted to heroin. When his dad went to prison, Beaty convinced himself that his tragic situation was all his fault.

Beaty said that thought haunted him for years. And it wasn’t until he embraced the healing powers of performance that he was able to overcome his pain.

“I’m no longer having moments of beauty pass me by because I’m in a cage of my own fears,” Beaty confided during his performance.

During his tenure, Beaty will also put on at least one show a season for ArtsEmerson.

David Dower, the director of artistic programs for ArtsEmerson, said he is excited by the chance to continue working with Beaty and have him continue ArtsEmerson’s initiative for civic engagement.

“We’ve been talking in big terms, now we’re going to to be working within those terms,” said Dower regarding the collaboration. “We’re excited to move from the idea phase to the action phase.”

Beaty previously held a yearlong residency at Emerson in 2013.

Taking the stage for a little under an hour, Beaty performed the opening monologue of his one-man play Emergency, which played the Paramount Mainstage last season. He also performed a powerful piece of prose in tribute to his mother, whose strength kept him afloat during his childhood.

Now Beaty hopes to take these healing performances and share them with the Boston community.

“My real intent in writing,” said Beaty, “is for us to know that no matter the pain that we experience, there is a possibility of transforming that pain into power.”