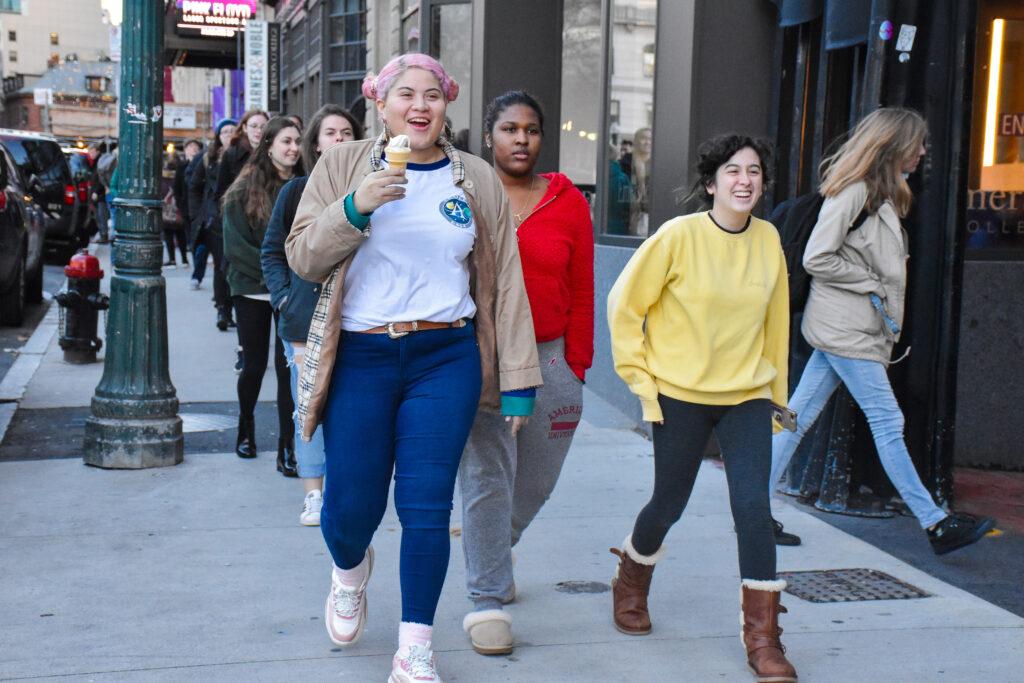 The expanded sidewalk will include greenery, benches and bike racks.

The college aims to expand the Boylston Street sidewalk from Little Building to the M. Steinert & Sons Pianos building to improve pedestrian traffic flow and the appearance of the Boston campus, according to President M. Lee Pelton.

According to Pelton, the sidewalk project will be part of the college’s budget for Little Building.

“When I first arrived at Emerson, I felt the narrow, beat up sidewalk did not reflect the excellence of this college,” Pelton said. “It has been a long term desire of mine to beautify the sidewalk.”

Emerson’s overall concept for the sidewalk revolves around three main goals—widening the sidewalk, adding sidewalk furniture, and improving building signage. Sidewalk furniture would include features like benches, planters, greenery, and bike racks. Emerson began sharing draft plans with contractors to receive an estimate on pricing as of Nov. 16.

Mombourquette said the college remains hopeful despite not yet receiving final approval to begin construction.

“It’s a long process of approvals, but the city has been very, very supportive. I feel like we are on track to receive our full approval,” Mombourquette said in a phone interview.

The process involves review and approval by multiple departments in city government. Each department evaluates a different aspect of the project’s scope, such as traffic flow, design, disability accommodations, and building signage.

As of Thursday morning, no official start date for the project exists.

“Our hope is that we will have all of our approvals by the beginning of January and that we will actually start construction at the end of February or early March,” Mombourquette said. “That is our goal.”

Emerson meets with these departments on an ongoing basis, according to Mombourquette.

“The city recognizes that the sidewalk width is not adequate for the amount of pedestrian traffic that we have there. It doesn’t really help Emerson be identified as a real campus,” Mombourquette said. “For those two reasons, they have been supportive from the beginning of the project.”

By widening the sidewalk, the college would remove the parking lane on Boylston Street. The street would continue to have three lanes of traffic.

“Cars and trucks pulling in and out always slows traffic along the street. It will take some management … but I honestly think it will help traffic flow,” Mombourquette said. “It doesn’t reduce at all the travel lanes—there are still three travel lanes.”

Eliminating the parking lane may pose a challenge for students who are picked up on it.

“Personally, I’ve used that lane to have someone pick me up from here. It was very convenient for them to pull up,” freshman Davin Roberts said. “Removing the sidewalk would take away from pick up and drop off, which is kind of a problem already because Emerson students don’t have cars—we need people to pick us up.”

The parking lane is currently occupied by the ECPD for police cruiser parking. During move-in and move-out periods, parents also utilize the lane to unload luggage and furniture in front of the residence halls.

During the Public Improvement Commission Hearing in September, Emerson representatives addressed new accommodations. The college plans to park police cruisers in Allen’s Alley behind the Little Building after construction. The rear of Piano Row is another option for parking the cruisers.

The college worked with the Office of Housing and Residence Life to create a new move-in plan. The plan is not official, but the college hopes to use Tremont Street, Allen’s Alley, and the Transportation Department parking lot with strict move-in times for families, according to information given in the hearing.

About 1,700 people exit Colonial Theatre from the matinee and evening performances, and 1,250 people travel to the state transportation building daily, according to Margaret Ings, vice president for government and community relations for Emerson, who spoke at a Public Improvement Commission Hearing in September.

College buildings on Boylston Street such as the Dining Center, Walker Building, and the three residence halls also contribute to the high volume of pedestrian traffic.

Along with bike racks along the sidewalk, the college plans to include a shared lane that would give bicyclists the same rights as vehicle traffic, according to Mombourquette.

Additional plans add a raised crosswalk between the south and north side of Boylston Street at the entrance to Boylston Place.

“The midblock crossing will be safer for all. It slows down oncoming traffic, and it eases crowds that would occur on Boylston and Tremont at the corner,” Ings said.

Emerson’s negotiations with the traffic department are not complete, but the college is hoping for a light at the crosswalk to calm traffic and ensure safety for pedestrians, according to Mombourquette .

Although Roberts recognized the inconvenience of not having a parking lane, he said the proposed crosswalk plan would be beneficial.

“If they are going through with this renovation, I do think putting a crosswalk in would be convenient—it would be a happy medium since they are taking away the parking lane,” Roberts said. “It does get congested, so it would make my life a lot easier.”

If the city approves the construction, there will always be a pedestrian lane open and access to all buildings on Boylston Street, according to Mombourquette.

“I think this is a project that is badly needed. President Pelton has advocated strongly for this to the city,” Mombourquette said. “I think it is really going to make the south side of Boylston Street really feel like the Emerson campus as opposed to just another way to get from one place to another.”

Pelton said he has advocated for the sidewalk project and his vision for a more defined Emerson campus since assuming his position in 2011.

“When the Little Building is finished and the sidewalk is widened, that area will become a destination place for all who live, work, study, and visit Boston,” Pelton said. “It is my belief that that part of our campus will become a lively, vibrant community of which our students will be a part.”

Pelton said he also aspires to use Boylston Street more often as a way to connect the college with the Boston community.

“My dream is that, twice a year, we go to the city and we ask them to close down Boylston Street from Tremont down to Charles so we can have a street festival that will bring our community together with the larger community of Boston,” Pelton said.