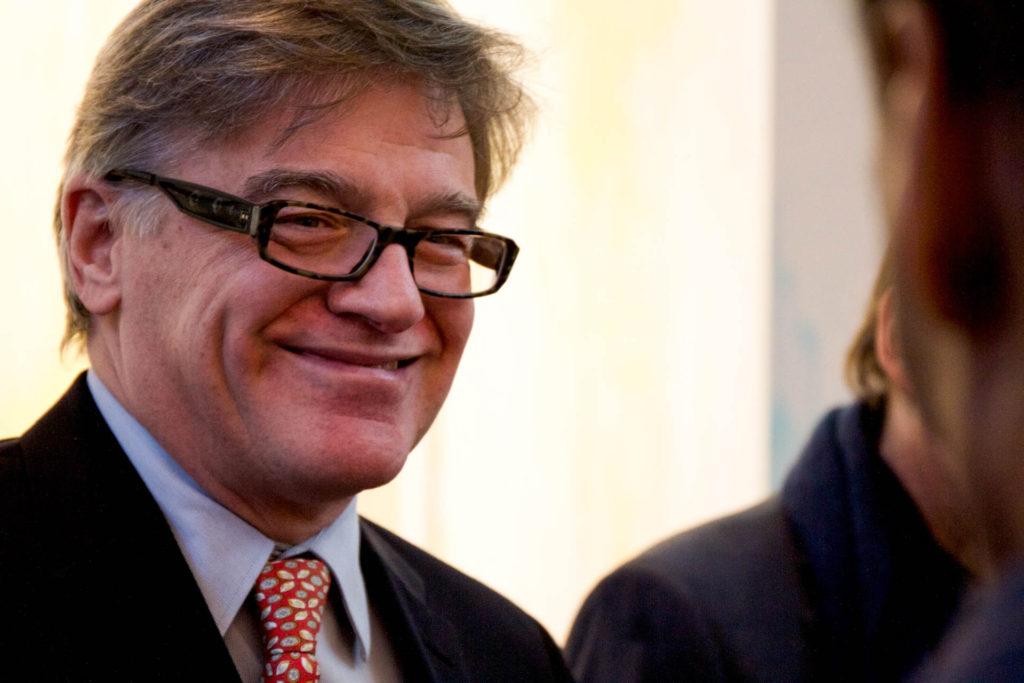 Sydney Manning ‘13 remembers sitting in the first day of “Europe After the Rain”—a class about European art post World War ll—with late professor Joseph D. Ketner ll standing in front of her and cracking a few jokes to loosen up the class. While most students appeared amused, a couple remained blank-faced.

“He walked right over to a student’s desk, stood there, and yelled, ‘It’s a joke, Melissa! You can laugh!’ with his arms kind of flailing,” Manning said. “At that moment, even she had to giggle. It just showed he didn’t take life too seriously, but took his job very seriously.”

Ketner, 62, passed away on Sept. 14 after fighting cholangiocarcinoma—bile duct cancer—for more than a year. Ketner leaves behind his wife Patricia, their sons Joseph III and Alex, and grandchildren Owen and Julian.

Ketner worked as the Henry and Lois Foster Chair in Contemporary Art Theory and Practice and Distinguished Curator-In-Residence at Emerson. He caused the opening of the Media Art Gallery on Avery Street in fall 2016. The gallery gave Emerson Urban Arts a space to showcase exhibits from student art to the work of South African artist William Kentridge.

Patricia Ketner still vividly recalls quizzing Joseph on various pieces of art to prepare him for tests when they were 18 and in college together at Indiana University.

“He did everything with a passion. Whether it was as a husband, or a father or grandfather, or coming up with ideas for cutting-edge exhibitions,” she said. “He never cut corners. He had the highest standards possible and made sure that he achieved those standards.”

At Emerson, Ketner taught upper-level art seminars primarily on Andy Warhol and post-war European art. He planned to teach “What is Contemporary Art?”, but another professor took over when he felt too sick to work at the start of the semester.

According to his wife and colleagues, Ketner loved connecting with people, whether they were famous artists or undergraduate students.

“He always loved to party, loved to have people around him. I’m much more reserved, but we somehow found a balance. Even in the depths of his illness, I would get home from work and he would say, ‘Where are we going for dinner tonight?’” Patricia said. “I’ll miss him every day of my life. He was a big personality and it’ll be really hard to fill his void.”

Brooke Knight, chair of the visual and media arts department, remembers Ketner as structured, methodical, and logical in his thinking, but warm and incredibly easy to work with. Knight said Ketner remained a private man, even while struggling with cancer.

“I never heard the word cancer come out of his mouth,” Knight said. “He would talk about medications he didn’t like and that he wanted to get back to swimming, but he never made his battle other people’s battles.”

Ketner was diagnosed in July 2017. According to the American Cancer Society, the 5-year survival rate for bile duct cancer, at best, is 30 percent. This means that even in the best circumstances, only about 30 percent of patients live up to five years after the diagnosis.

Across campus and the world, people knew Ketner as a consummate professional. Before coming to Emerson, he worked as Chief Curator of the Milwaukee Art Museum in Wisconsin and the Director of The Rose Art Museum at Brandeis University in Massachusetts. He curated exhibits around the globe, including an Andy Warhol exhibition at the Brooklyn Museum, a Jackson Pollock mural at the Guggenheim Museum in Venice, Italy, and the Uncommon Project at Emerson College.

John Craig Freeman, who worked closely with the curator in the visual and media arts department, said Ketner turned his attention to avant-garde video art in public spaces in the last couple years.

“He loved the idea of activating art in areas where people wouldn’t expect it to be,” Freeman said.

Robert Sabal, dean of the School of the Arts, said Ketner held an incredible wealth of knowledge about art which he would miss.

“All of that knowledge came from genuine affection for art and artists and a deep commitment to how art could open people up in various ways,” Sabal said. “I view art all over the world, and every time I look forward [to] coming back and talking to Joe about a recent show I’d been to or an artist I’d seen. We had such a spirited dialogue.”

Ketner’s family will hold an open memorial service on Sept. 29 at John Everett & Sons Funeral Home in Natick, Massachusetts. On Sept. 30, the Media Arts Gallery on Avery Street will hold a celebration of Ketner’s life.

The family requested that instead of flowers, mourners should consider donating to the Joseph D. Ketner II memorial fund.