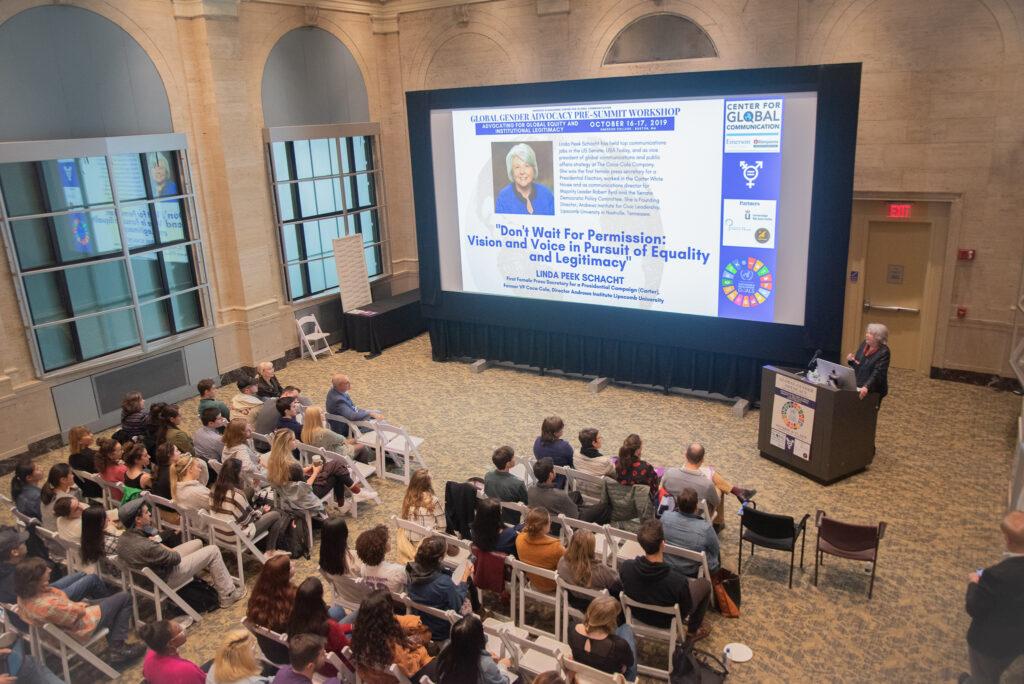 Linda Schacht, former campaign press secretary for President Jimmy Carter, presented on the power of women’s voices and encouraged attendees to speak up for themselves. Photo by Jakob Menendez / Beacon Staff

Former political aide and Coca-Cola executive Linda Schacht encouraged women to have the confidence to speak up for themselves and other women in their work at a keynote address Wednesday.

“We as women, I think, sometimes feel that we are victims,” Schacht said in her speech. “Victims to a society, victims to an organization—and maybe we are. But I choose not to be a victim. I choose not to wait for permission.”

Schacht laid out her list of factors to consider for women hoping to achieve their dreams. She suggested employing good timing, commitment to facts as opposed to emotion, passion, and telling a good story.

Toward the end of the speech, Schacht cited powerful women in government service, such as Speaker of the House Nancy Pelosi, to encourage attendees to embrace their strength.

Schacht served as campaign press secretary in 1980 for former President Jimmy Carter and was the first woman to serve in such a capacity. She went on to work in his administration and later as communications director for former Senate Majority Leader Robert Byrd, D-W.Va. After her time in public service, Schacht went on to work for the Coca-Cola Company as vice president of global communications and public affairs strategy.

The college co-hosted the event in the Bill Bordy Theater with Universitat Ramon Llull Blanquerna from Barcelona, Spain. The institutions will also co-host the main Global Gender Equity summit in Barcelona this November. Other European institutions such as Universidad Rey Juan Carlos and Fundación Camilo Prado also contributed to the event.

“I think what we’re trying to do is just get Emerson students to engage and to challenge [the status quo] and not be content,” Payne said in an interview.

“[Schacht’s speech gave me] a bridge between what I learn from here [and class materials] that I can take into my future workplace,” Yang said.