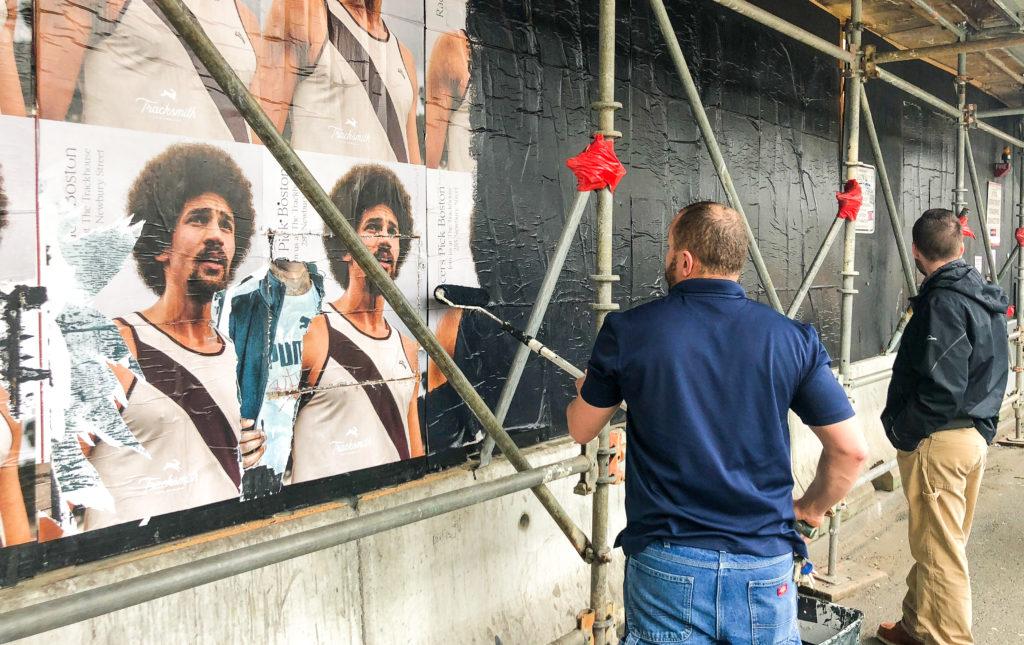 Workers painted over the scaffolding in front of Little Building where over over 12 students were publicly accused of sexual assault.

The college does not plan to investigate who posted a list of more than 12 students accused of sexual misconduct onto Little Building’s Boylston Street scaffolding on Thursday, according to a college official.

President M. Lee Pelton could not legally comment on whether or not any of the individuals named on the scaffolding have been involved in reported sexual misconduct incidents at the college.

“We will not tolerate sexual misconduct. Every single report of misconduct has been received and acted upon appropriately without exception,” he said in an interview.

An Emerson student posted a video of the list and the names written onto the scaffolding on Twitter early Thursday morning. More than 13,000 people viewed the video at the time of publication. Facilities Management used black paint to fully cover the names around 3 p.m. the same day.

Pelton declined to detail any backlash the college might have received from those listed on the scaffolding or their families. In a community-wide email sent Thursday evening, he said the college will remove any similar writings as the college becomes aware of them.

“Our cherished and long-held college value of basic fairness is undermined when members of our community accuse other members of violating the college’s code of conduct without the benefit of all the facts,” he wrote.

The publicization of the list of names followed an impromptu gathering of students on Wednesday night in Piano Row’s multipurpose room. The organizers of the event intended to foster a solution to the claim that the college protects abusers and does not properly handle sexual misconduct cases, according to the event page.

One of the six organizers of the event posted on Twitter that they do not know who posted the list.

Pelton said the college consistently responds to reported incidents of sexual misconduct in an appropriate manner.

“I am confident that every reported incident of sexual misconduct has been acted upon in a way that is consistent with our stated policies,” Pelton said. “However, that does not mean that everyone involved in these cases will be satisfied.”

Former Emerson student Jillian Doherty reported a sexual assault to the college in March 2013. After an investigation and an appeal from Doherty, the student was expelled in October 2013. Doherty filed a lawsuit in August 2014 against the college for Title IX violations, negligence, negligent infliction of emotional distress, and intentional infliction of emotional distress. The college filed a motion for a judge to decide the case without a full trial, which the judge allowed, and Doherty’s case was closed.

In October 2013, Doherty and two other students filed a federal complaint with the Office of Civil Rights over Emerson’s process and handling of their cases, which launched an investigation into Emerson’s policies on sexual misconduct. The OCR investigation is ongoing and has not been resolved. General Counsel Christine Hughes said in an interview that the college last communicated with OCR in January 2015.

Another student organizer of the event, sophomore Shelley Gruenberg, declined to comment on behalf of all of the organizers.

“We understand the gravity of this time and will support every single survivor coming forward,”  she wrote in a statement posted on Facebook. “Survivors will no longer be silenced, and that is where the focus should be placed. Remember to treat these issues in a trauma conscious way.”

Melanie Matson, the director of the Healing and Advocacy Collective, said she will hold an event called Healing Space for Activists on Monday from 5 to 7 p.m. in the new Elma Lewis Center on 148 Boylston St. for activists who may be concerned about survivors on campus. HAC provides confidential support for those impacted by power-based interpersonal violence, according to the college’s website.

“[Healing Space for Activists is] for anyone who might identify as someone who is concerned about survivors and what they experience, whether they recognize themselves as survivors,” Matson said in a phone interview. “We are here to support students who have been impacted by power-based interpersonal violence and believe that their voices should be listened to.”

Matson said the HAC goes by an open-door policy and no appointment is needed. Students can also reach out through [email protected], or via phone at 617-824-8857. If students would like to talk after office hours, Matson said she and Survivor Advocate Greta Spoering can make themselves available to provide support. Students in need of support at other campuses such as Emerson Los Angeles and Kasteel Well can also connect with HAC through Facetime, Matson said.

After the review, a committee recommended changes to the college’s Policy Committee in July 2018 which have not yet been approved. White could not disclose the committee’s recommendations, as they are still pending approval.

“When I began here in 2014, almost five years ago, that was a result of student activism. And so I very much appreciate student activist efforts at Emerson and worldwide,” Matson said. “We’re here to support survivors. And so if anybody needs anything, I hope that they feel like they can reach out to us.”

Update April 18, 2019: The Beacon decided to omit the name of an organizer and Facebook event page to preserve survivors and the organizer’s anonymity.

Update April 19, 2019: Information from the Healing and Advocacy Collective and the Jillian Doherty v. Emerson College lawsuit was added.