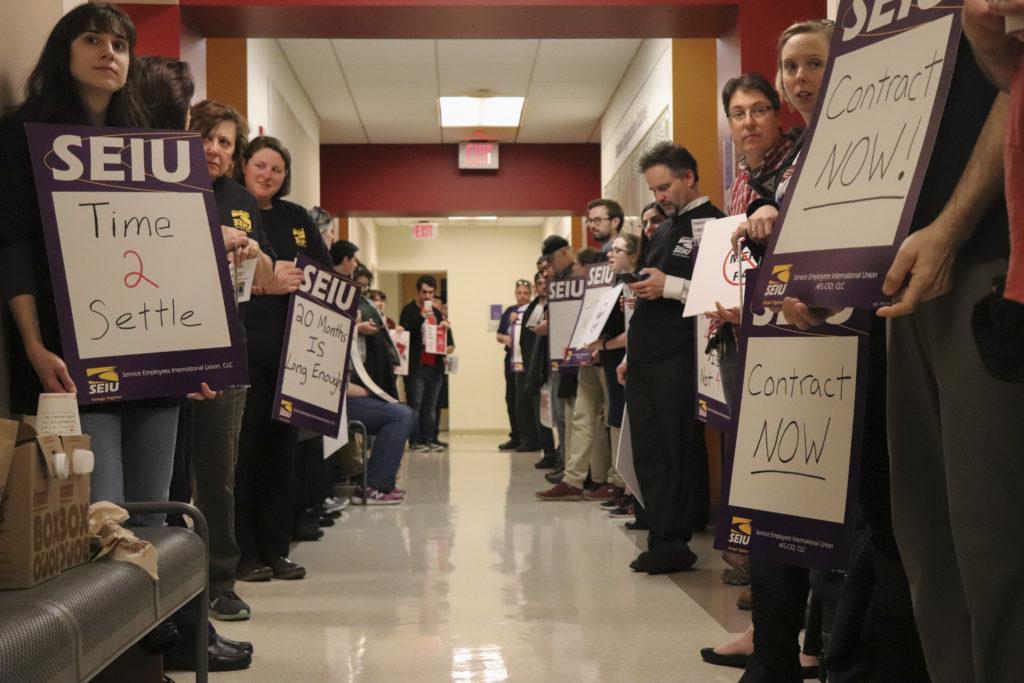 About 70 staff union members lined the hallway elbow-to-elbow on the lower level of the Max Mutchnick Campus Center while college administrators entered room L-151 for a contract negotiation with the union’s bargaining committee in April. Chris Van Buskirk / Beacon Archive.

The college began distributing the demands and benefits listed in the collective bargaining agreement or contract with Emerson’s staff union after ratification this summer.

The Service Employees International Union 888 voted to ratify an agreement set forth by the college and the union’s bargaining committee on May 31. After nearly two years of protest, unfair labor charges, and petitioning, the union, made up of 150 staff members, received its first contract. According to two union members, it granted many of their wishes.

The college agreed to exile merit pay, which gives employees pay raises based on performance evaluations set by the employer, to give union members a monthly commuter benefit and a shared sick program, which allows staff members to donate sick-time when a fellow staff member needs an extended sick-leave.

The college also agreed to elevate union member’s wages to the 40th percentile, where the rest of Emerson employees’ wages reside as of March 26 Union members were still in negotiations with the college so their salary remained untouched.

Previously, staff member wages were lower than the 25th percentile, or less than 75 percent of similar employee wages in peer schools like Brandeis University and Skidmore College, according to the staff compensation survey.

“For a first contract, I think we got a lot for what we asked for,” Estelle Ticktin, an administrative assistant to the chair of communication sciences and disorders, said.

Ticktin, one of the union’s bargaining committee members, said she thinks the union and the college reached a very successful and mutually beneficial conclusion.

“I think the college is very pleased about how it worked out,” Chief Human Resources Officer Shari Stier said.

The college and the Emerson staff union created the collective bargaining agreement to set standard wages, working conditions, and ensure efficient operations, according to a PDF of the contract sent by Ticktin.

SEIU 888 represents staff in the Office of Academic Affairs, the School of Communications and Marketing, and the Information Technology and Institutional Advancement departments.

SEIU 888 Member John-Albert Moseley, a program coordinator for the visual and media arts department, said the most important aspect the college agreed on in the contract was getting rid of merit pay. He said the old system of using merit pay to evaluate raises was arbitrary, unfair and biased.

“It’s a really great first step in establishing greater salary equality across job descriptions, across job titles, and, really importantly, of the disparity between men and women’s pay,” Moseley said.

By January 2019, every member who is not yet paid at the 40th percentile of the new compensation study will have their salary adjusted, according to the contract.

The contract also states performance evaluations, which employers used to determine employees’ raises in the merit pay system, will no longer be tied to compensation. Union members will also now have the ability to provide feedback on their managers.

Moseley said one benefit the union pushed for and was surprised to receive, was the commuter benefit. The college now grants all staff members who work 20 hours or more a week an $84.50 stipend per month to cover public transportation costs for travel to and from the college.

According to Stier, in the Office of Human Resources, this program started on Oct. 1.

“It’s a very helpful way to not only encourage public transportation but to really help staff out where transportation can be a burden in a very cost-driven city,” Moseley said.

Moseley commutes to Emerson from Providence, RI and pays more $363 a month to take the commuter rail from zone 8, his Massachusetts Bay Transportation Authority district. The $84.50 per month is about the same price as a monthly zone 1 MBTA subway pass.

Moseley said many union members can’t afford to live in Boston, and that it’s a shame he can’t live in the same community he works in, but the commuter benefit is a huge help.

Union members will also have access to a shared sick-time program, or sick bank, for when staff members, or a family member, suffers a catastrophic illness or injury and needs more time off of work.

When Moseley started his first job at Emerson, he had to go through an emergency surgery but did not have enough sick-time built up to take time off for it. He said his colleagues begged and pleaded the Office of Human Resources to share their sick days with him.

He said his fellow employees were great advocates and created a temporary policy in place to enable Moseley to take advantage of the donated sick-time, but he’s happy there is now a permanent plan in place for when other staff members need to take time off.

Stier said during the first enrollment period this year, 97 staff members donated 3,000 hours which equals about 366 days. The average number of days donated from each staff member was 3.77, Stier said.

Moseley said establishing the first contract gave the union a constructive voice and changed the relationship between the union and college.

“We now have contractual language that guides how we behave with each other and how we get through the day with each other, and how we, from time to time, have to challenge each other,” Moseley said. “We cannot just be swept away. Our voice is at the table, and we have tools to make sure that it’s heard and that we resolve things in a fair and equitable way.”

Ticktin, a chief organizer of the union when it formed in 2014, also said the dynamics between the college and the union have changed after 20 months of negotiating.

“It’s the beginning of more of a working relationship between staff and management,” she said. “It has been a hard fight, and you don’t get anything you don’t fight for.”