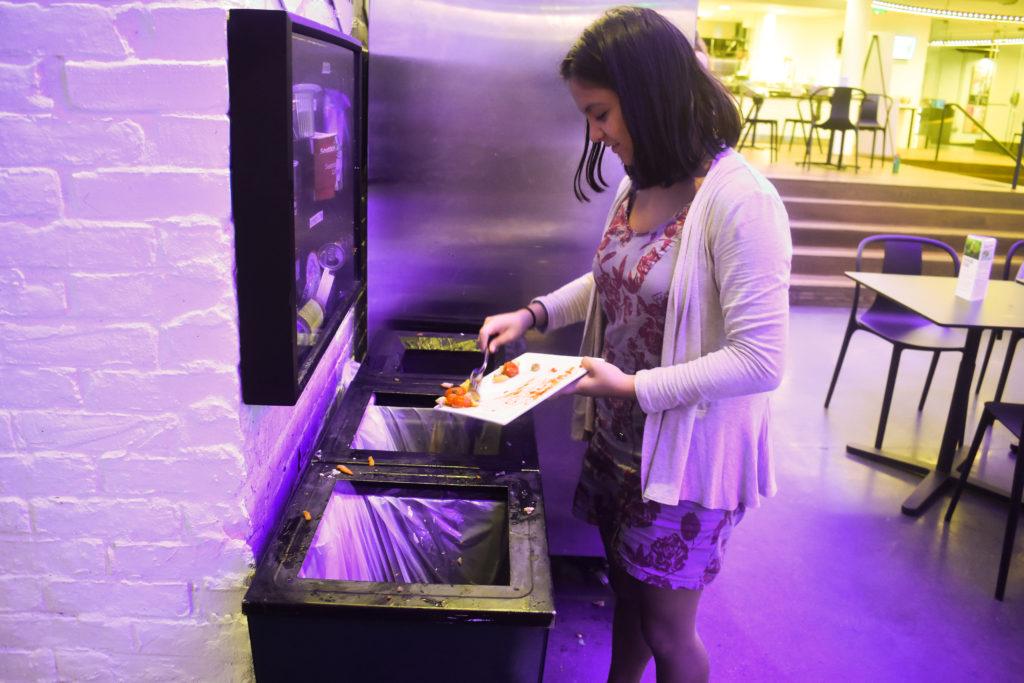 According to the Sustainable Emerson Facebook page, Emerson’s recycling rate last spring ranked No. 141 out of 150 colleges and universities in the nation. • Abbey Finn / Beacon Correspondent

Emerson came in last place in a recycling competition against five other Boston colleges and universities last spring. This semester, the Sustainability Committee and Bon Appetit combined resources to focus on educative initiatives for students to minimize waste production.

Last year, the college had a recycling rate of 12 percent and a composting rate of 14 percent—26 percent altogether. According to data collected from RecycleMania, a program used by colleges and universities to create more sustainable campuses, 63 percent of that waste was recyclable or compostable.

According to the Sustainable Emerson Facebook page, Emerson’s recycling rate last spring ranked No. 141 out of 150 colleges and universities in the nation.

This year, the recycling rate increased to 20 percent, according to Sustainability Committee Co-chair Duncan Pollock. Pollock said students need more education on what they’re throwing away for the college to improve its campus-wide recycling rate.

“We have a recycling rate that is not where we want it to be,” Pollock said. “We do a really good job at the administrative side, but not on the student side.”

Currently, no recycling or composting signs label bins in the Dining Center, not including Center Stage, and all of the materials disposed in those bins are considered waste.

Duncan said the college employs individuals who go through the dumpsters to find cardboard, but no one goes through trash bags to find recyclable or compostable materials.

In the coming weeks, Cullen said she plans on placing signs with a QR code to the sustainability guide near trash and recycling bins in heavily trafficked bins on campus, such as the Max Cafe, the Iwasaki Library, the Walker Building, and the Dining Center.

The guide features specific waste products students may encounter on a daily basis, like a plastic mac and cheese self-serve container, and directs students on where to put the item, Cullen said.

“By providing the infrastructure and a guide to make this as accessible as possible, hopefully students will have all the resources they need to improve personal behavior,” Cullen said.

In Center Stage, Cullen and the sustainability committee added digital signage on television screens that feature recycling tips for students to use when deciding what item to put in which bin.

Sophomore Alanna Nickles said she feels like the current signage for specific waste in the Dining Center and Center Stage is unclear.

“It is all in the same area [in Center Stage], and it is really hard to tell which is which,” Nickels said. “That is why the majority of the trash that is thrown away in the dining hall by students just goes to the landfill.”

Pollock said his department usually finds the lowest amount of recycling and the highest amount of trash in the residence halls.

In March, RecycleMania hosted a competition for how much each floor in Emerson’s residence halls recycles.

Piano Row recycled an average of 3.67 percent of waste, the Colonial Building recycled 16.9 percent, Paramount recycled 7.5 percent, 12 Hemenway recycled 4 percent, and 2 Boylston Place recycled the most with an average rate of 14 percent, according to results posted on the Emerson Sustainability Facebook page.

The average recycling rate calculated out of all five of the residence halls was 9.2 percent.

The sustainability committee explored implementing composting outlets on every floor in residence halls last year, but the worry of pest control and contamination halted the initiative, Pollock said. The college began composting three years ago solely in the dining facilities, according to Pollock.

Nickles said she set up her own composting system in her suite and disposes of it once a week free of cost through Project Oscar, a Boston-funded composting initiative.

“I honestly don’t know if it is as much of a pest control issue or just people not wanting to spend time and resources on it,” Nickles said.

All of the compost materials then go in a larger compost bin outside for waste management to pick up, Bon Appetit District Manager Dawn Sajdyk said.

Bon Appetit sends the kitchen waste to clean farms, for it is regulated as solely food waste, and sends the general Dining Center compost bins to the non-clean composting farm because of possible contamination with other products, Pollock said.

Emerson currently has no process to filter through non-clean composting waste or landfill waste.

“We are very cognizant about what goes into the landfill,” Sajdyk said.

Bon Appetit also works with Food for Free, a Cambridge-based program that picks up frozen, leftover food from campuses throughout Boston and donates it to local food banks and shelters, according to the program’s official website.

The college worked with Food for Free last year through Sodexo, but Bon Appetit lowered the amount of leftover food this year by producing smaller batches, Sajdyk said.

Sajdyk said Emerson’s dining services wants to partner with different organizations on campus to push the sustainability issues out to the students.

“This generation coming up is much more socially conscious than generations before and the more education we can do around it to preserve the earth is really where our future lies,” Sajdyk said.