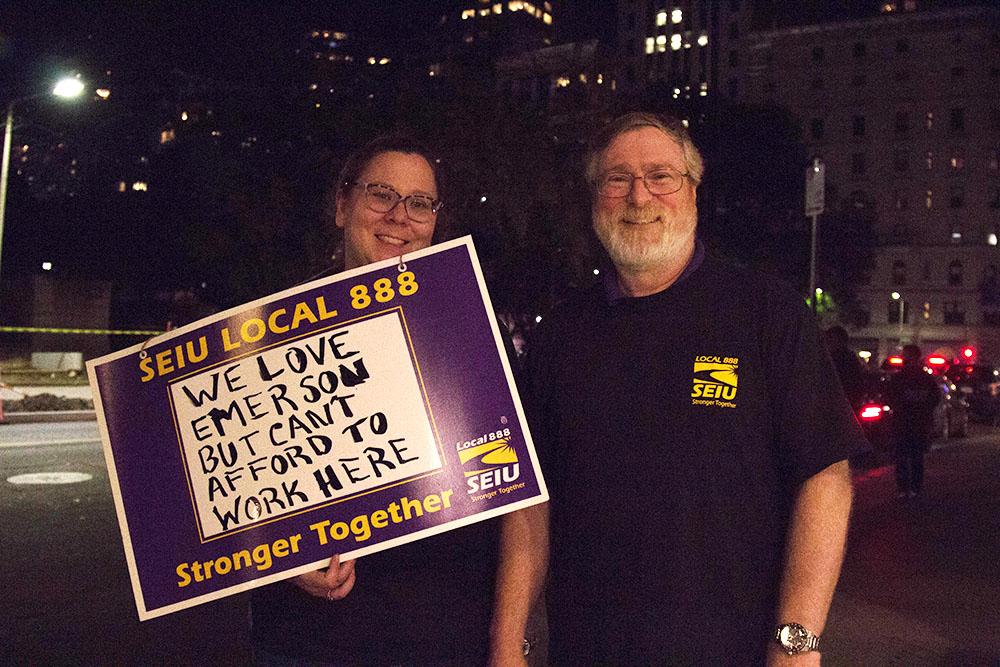 Emerson staff members held signs that read: “We love Emerson but we can’t afford to work here” outside the Dining Center as part of a protest composed of about a half-dozen people on Wednesday evening focusing on low staff wages.

“The school has been promising they’ll raise our base wages up to a reasonable wage,” Dennis Levine, the Information Technology Department’s systems security administrator and a member of SEIU Local 888, the union that represents some Emerson staff, members said.

According to Levine, 75 percent of employees at other schools are paid more than Emerson staff members in similar positions, putting college employees in the 25th percentile for wages.

Levine also said the college is hiring new employees at the 40th percentile, the rate it had agreed to pay but has not yet provided to current staff members.

“Every building, they’ve used as an excuse as to why they don’t have enough money to raise our base wages,” she said.

According to Levine, SEIU started representing Emerson staff members from the IT, Academic Services, and the Institutional Advancement departments in 2016.

The two said they were hoping to catch the attention of college officials gathered in the lower level of the Dining Center for a dinner.

“Our staff are valued members of our community and we look forward to reaching an equitable and fair compensation and benefit agreement through the current collective bargaining process,” the college wrote in a statement to the Beacon. “However, there is still work to be done and the College looks forward to continuing our discussions in good faith.”