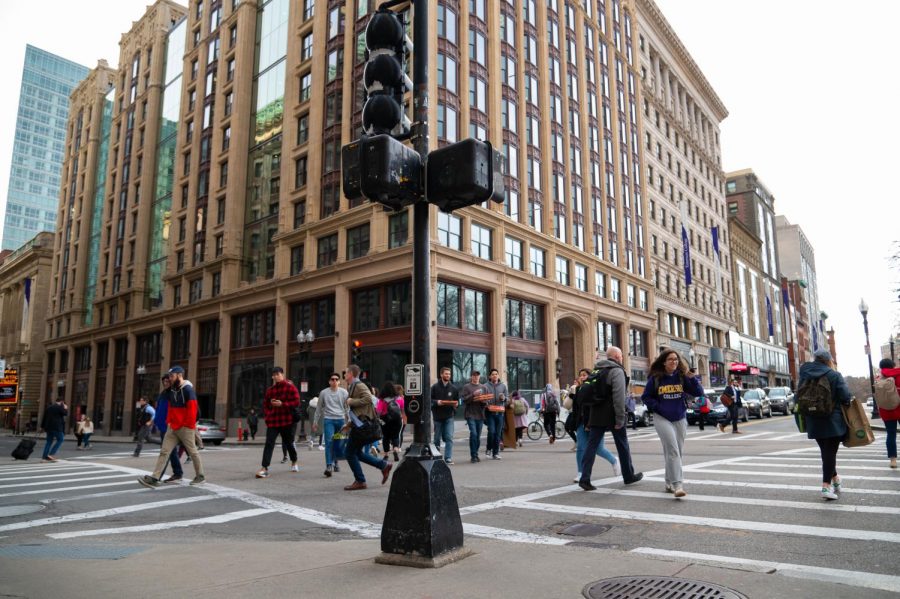 Students cross the intersection of Boylston St. and Tremont St. in front of the Little Building.

Tuition and room and board rates will increase by two percent for the 2020-21 academic year as Emerson attempts to mitigate the massive financial losses administrators anticipate in the coming months, President M. Lee Pelton announced in an email Friday.

The increase, which will amount to $1,350, is down from the initial four percent the college planned before the COVID-19 pandemic ravaged the U.S. economy, leaving families, businesses, and institutions in financial disarray. Administrators told faculty in a meeting two weeks ago they were bracing for somewhere between $33 million and $76 million in losses in the upcoming fiscal year.

“As an institution of higher learning, Emerson exists, first and foremost, for our students,” Pelton wrote in the email. “COVID-19 has had devastating effects on many Emerson students and their families, and we have spent the last several months focused on finding ways to support their continued enrollment during this time of financial hardship.”

But the announcement seemingly ignores student demands for significantly lowered costs that have crescendoed on social media in the past several months. Students have argued that online education is of a significantly lower quality than in-person instruction, especially for hands-on performance and production classes. The college appears to agree, normally charging about half the price of in-person courses for online instruction (a full year of online tuition costs $24,896). The hybrid model Emerson plans to implement will see at least half of the fall semester conducted online.

“The experience we’re going to be getting, it’s not going to be the same, and I just don’t see how [Emerson] can justify charging full tuition,” rising senior and marketing major Diego Torres said in a phone interview last week. “We’re not getting a full semester in person, and the experience or quality of life is not going to be comparable to what it was like in previous semesters.”

Student Government Association President Claire Rodenbush encouraged students to protest if costs are not decreased, labeling a cost decrease “a moral obligation,” in a tweet posted one month ago.

“‘Cutting tuition increase from 4% to 2%,’ real nice way to frame the fact that you’re still charging us more,” Rodenbush said in a tweet posted shortly after the email reached students. “[The college is] still raising tuition during a financial crisis. Don’t frame it to make yourself look generous. It’s insidious is what it is.”

Pelton said in the email that Emerson will offset the tuition increase and provide additional aid for students and families who have been financially affected by the pandemic via an application process. It is unclear how much aid the college will provide and the rate at which applications will be approved.

Students have argued that an increase in financial aid won’t offset tuition costs.

The college’s announcement follows similar indications from a slew of universities in the Boston area and nationwide that plan to hike fall tuition despite growing cries from students to lower costs.

However, Emerson’s financial situation may be precarious and different from other institutions. Emerson’s annual revenue relies heavily on tuition, according to college tax forms. In 2019, nearly $235 million, or 89 percent, of Emerson’s $264 million revenue came from tuition and housing charges. With only close to eight million dollars in net gains in 2019, a tuition decrease could potentially push the college into the red, further contributing to its more than $540 million of debt.

Northeastern University, for example, generated around $154 million in net income in 2018, according to their most recently available tax forms. In 2018, they had $705 million in debt and an endowment of at least one billion dollars.

The email also detailed a number of other mitigation efforts, some of which had already been communicated to faculty, including a 10 percent salary cut for executive leadership and a freeze on salary increases and retirement contributions. Newly announced mitigation efforts will include a suspension of transportation benefits for remote staff and “a required partial use of vacation days during winter break for staff and administrators;” a suspension of new sabbaticals and open slots for tenure-track; and “a 10 [percent] reduction in each operating budget area managed by the Vice Presidents.”