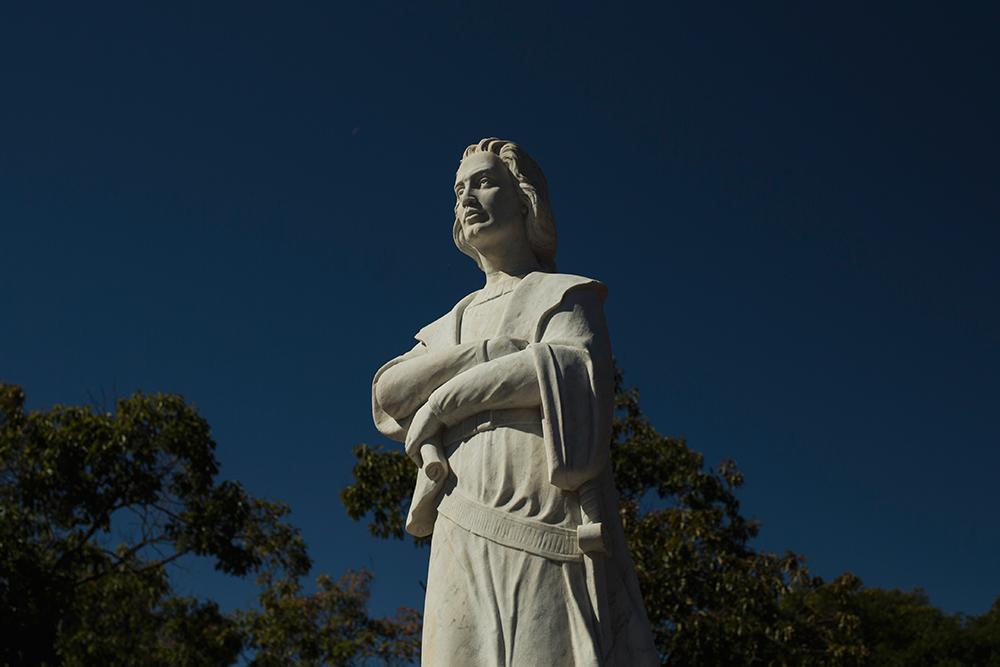 Every fall as Columbus Day approaches, students look forward to the three-day weekend, with time to catch up on sleep or homework, or really do anything besides go to class. You’ll see the occasional Facebook post joking about “celebrating” the holiday by walking into somebody’s house and declaring that you live there now, but beyond that, there’s not much discourse on what actually transpired when Columbus ‘claimed’ America.

In elementary school we’re taught refrains like “In 1492 Columbus sailed the ocean blue,” but it’s not until high school, or sometimes even later, that we learn about the atrocities he committed against indigenous peoples. The historical figure landed in the New World and began to extract gold and conquer the people living on the land he “discovered.” He neither discovered that the world was round nor America itself—he landed in what is today the Bahamas.

All things considered, we have to wonder why we’re still celebrating a holiday in this man’s name. It’s always shattering to discover that you’ve been lied to, and when the liar was the system obligated to educate me, it was just short of enraging. Discovering all the deliberate misinformation surrounding this legacy caused me to begin to question what I had been taught in history class, and wonder just how much colonialism was changing our perspective.

Columbus was determined to continue his quest for gold, taking several native men—covered in their jewelry—back to Spain with him to show off his findings to Queen Isabella, according to A People’s History of the United States by Howard Zinn. She allowed him to return, at which point he began chopping off the ears and noses of the Lucayan natives, as an example to the others, who wouldn’t comply with his demands to be brought more gold. In the years that followed, he brought 500 Lucayans back with him (only 300 of whom survived) and began selling them as slaves. He brought smallpox and other diseases back to the Americas with him, and forced girls as young as nine years old into sex slavery.

The more I learned, the more I felt betrayed and a little horrified that I had been literally singing this man’s praises throughout my childhood. When I finally learned the truth in high school I was appalled by how much had been left out, and how quick my teachers were to brush over the atrocities once we finally did address them. Every year when the holiday rolled around, I couldn’t help but feel a little grateful that my school chose not to participate, while my classmates continued to gripe about the change. My first year at Emerson, I felt guilty for looking forward to having some extra time to relax knowing the cost at which it came. Labor Day and Veteran’s Day I could justify. Martin Luther King Jr. and Presidents’ Day as well. But this? I really couldn’t find any good reason for it.

So why do we still have a holiday celebrating this atrocious man? In 1937, the Knights of Columbus, a Roman Catholic fraternal service organization, successfully lobbied President Roosevelt to make the day a federal holiday. The group was founded initially to help low-income immigrant Catholics, particularly Italians, who were heavily involved in the lobbying process. Columbus was seen as one of the more influential men to come out of Italy, and because of the rampant hate crimes against Italians at the time, they wanted a historical figurehead who could be viewed in a positive light by the whole country. While it did help change public perception in a positive way, creating this holiday also completely changed the narrative around this conqueror in our public education system.

Elementary school children across the country are taught about the great man who gave them the day off. This erases the history of the Lucayan people who were wiped out at Columbus’s hands. In the years that followed the oppressor’s initial arrival, the estimated Lucayan death toll was between 3 and 5 million due to starvation, forced labor, and disease. When we teach the history of our nation, it should be framed in a realistic light—that Columbus was ruthless, and had no problem taking down whoever stood in his way. As we get older we learn the truth, but we are often past the point of caring so long as we get the day off. However, this is not a holiday we should continue.

Many cities, such as Seattle and Minneapolis, have opted to rename the holiday Indigenous Peoples’ Day. It honors the peoples who truly discovered the New World—before they were essentially wiped off the map. Others have opted not to acknowledge the holidy at all. In 27 states students are still required to go to school on Columbus Day, and only 15 percent of private sector workers take the day off. My public high school in Connecticut chose not to take the day off, in part due to anticipated snow days but also because they didn’t feel it was a worthy holiday, and I agree that it is not.

As a higher education institution in a liberal city such as Boston, Emerson has the opportunity to look critically at Columbus Day and question how we frame our celebration of it, or if we should even celebrate it at all. We have the chance to make a statement by not participating in the celebration, and just treating it like any other day. Columbus is not equatable to Martin Luther King Jr., Abraham Lincoln, or George Washington all of whom share the same federal holiday status. By continuing to participate, we are recognizing him as a hero, when in reality he barely played a role in the founding of our country, and undoubtedly did not contribute positively. Fighting against a day off is not popular, but when you consider who Columbus was, it’s really hard to justify.