Column: It was great to be back in Fenway Park 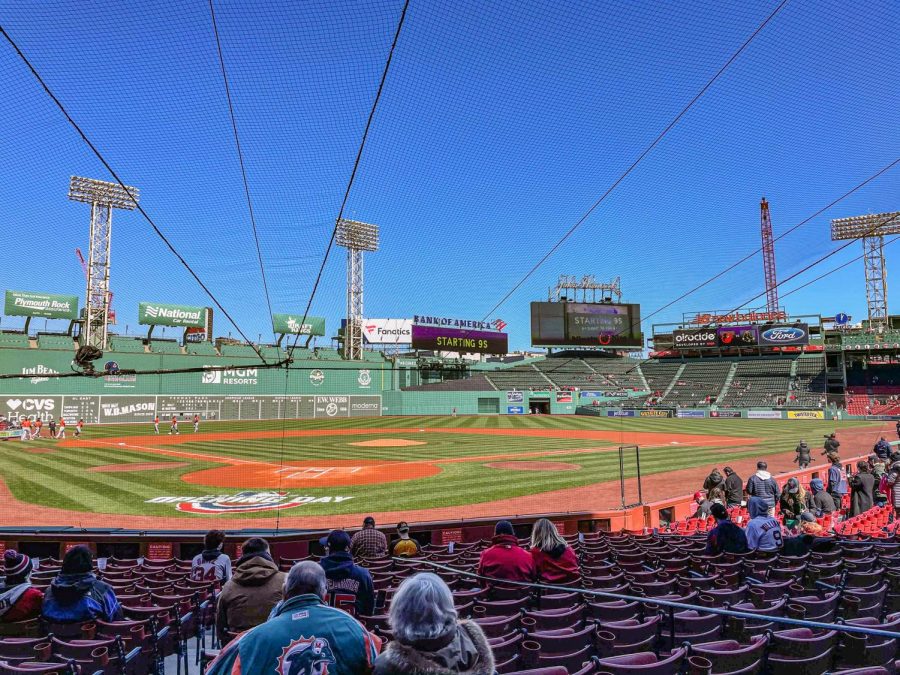 Fans sat in pods of two or four for the game.

Before Saturday, “Play Ball!” was an expression I hadn’t heard in Fenway Park since game two of the 2018 World Series. My return to Fenway Park on Saturday also marked the first in-person baseball game I’ve been to since the Milwaukee Brewers played the Miami Marlins at Marlin Park on Sep. 11, 2019.

When Massachusetts Gov. Charlie Baker announced a limited number of fans would be allowed at Fenway Park to begin the Boston Red Sox’s 2021 campaign, I was all over it. I hopped on StubHub and purchased tickets—after a brief hiccup. Tickets are only available in twos or fours, so I called my close friend and we decided to attend the Red Sox’s second game of the season against the Baltimore Orioles.

Personally, I fear live sporting events could be a super spreader of COVID-19. There aren’t any testing requirements prior to a game at Fenway. The San Francisco Giants, New York Mets, and New York Yankees are the only teams currently requiring proof of either a negative test or vaccination before attending a game.

The Red Sox official website instructs all ticket buyers to fill out a symptom checker through the MLB Ballpark App to be allowed into the stadium. Upon arrival to the park, however, I was never questioned if I had filled out the survey.

Fans were required to wear their face masks at all times unless they were drinking or eating, along with only being allowed to eat at their ticketed seats.

Baseball has a lot of hecklers, and I noticed that most fans around the park would take their masks down, or off completely, to yell towards the field. I’m a very active fan at baseball games too, but I kept both my masks on the entire game while losing my voice from all the cheering.

I sat right behind home plate, and as a result, could be seen on the New England Sports Network broadcast for almost every pitch of the game. Red Sox staff would walk down the aisles in between innings to check if viewers were wearing their masks, but it felt like every other section didn’t seem to have this treatment. I occasionally felt unsafe because fans around me would tear down their masks when they knew the staff wasn’t looking.

It was refreshing to walk into what is normally an extremely crowded concourse and have so much room to spread out. Concessions and bathroom lines, that are typically dreadfully long, were manageable. The prices on the other hand were out of control—a single hot dog cost $6.50. For a cold day, the team store had gloves in stock that were an outrageous $25.00 per pair.

As I arrived at my seats, they were locked up with zip ties to restrict fans from sitting in unauthorized seats. One of the staffers came down and cut the zip ties, and then it was finally time to watch some baseball.

Though I’ve been to Fenway somewhere in the double-digits, this experience will stand out to me. Red Sox fans are very committed to their team, and despite slumps or terrible weather, there are typically at least 20,000 fans supporting in the ballpark. As of now, Fenway is only allowing 4,500 fans into their stadiums—12 percent capacity.

It is pretty standard for all ballparks to be under 30 percent capacity with the exception of the Texas Rangers, which are allowing full capacity. The Rangers had over 38,000 in attendance this past Monday. When I looked around and saw seat after seat empty at Fenway, it felt very off-putting.

That uneasiness truly hit me when the crowd attempted to start the wave. When I glanced off to the outfield, I saw the most broken and depressing wave I’ve ever seen at a baseball game. Every heckle was heard, “Take Me Out to the Ballgame” was extremely quiet, and the energy of the ballpark was unspirited. The only thing that felt normal was the collective sing-along of “Sweet Caroline.” This dead noise could also be a metaphor for the whole series as the Red Sox got swept by the Orioles.

I’m glad that I ended up going to the best game of the series with the Red Sox losing the second game 4-2. In the bottom of the ninth inning, the crowd had exploded with energy when the Sox had two men on base with zero outs. Unfortunately, they ended the inning scoreless.

The final score never really mattered to me—I was just happy to be able to get out there and watch professional baseball again. I will be returning back to Fenway one more time before the end of the semester, as the world hopefully starts to look a little more normal.