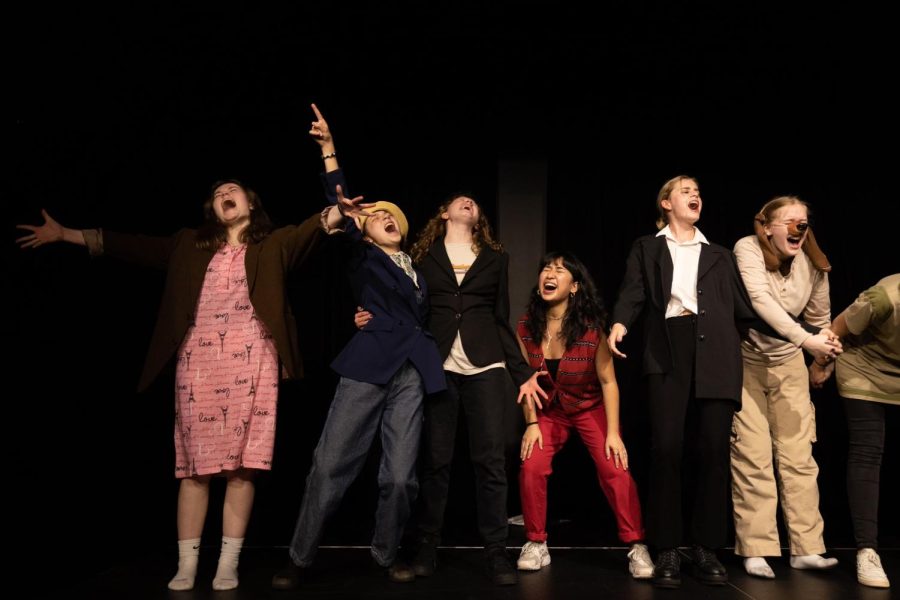 Most people are familiar with the classic story of “Annie”—an orphan girl who is selected to live with rich man Oliver “Daddy” Warbucks who eventually adopts her. But how about this: instead of little orphan Annie, it’s big star Alaina Reyes, a sophomore visual media arts student, of Emerson’s comedy troupe, The Girlie Project.

All eyes were on Reyes on Oct. 21 at the troupe’s semester debut, as her bright red outfit stood out against the Student Performance Center’s Blackbox Theater. “Alaina” was also Reyes’ first time performing ever, and what a performance it was.

“It was an idea that we had on a whim—someone proposed that we do a performance of ‘Annie,’ and we already had the theater reserved for an extra show date besides our sketch show so Isabella, our president, said we should use the extra date to do ‘Annie,’” Reyes said. “We pulled the whole thing together within the span of a week pretty much.”

Quite literally standing next to Reyes, emphasizing their height difference, stood fellow VMA sophomore Mason Grammer. Grammer received a cheering applause upon entering as Daddy Boardbucks, a fitting name change for an Emerson production. Reyes and Grammer are Girlie’s newest additions to the troupe, though they both seemed like seasoned professionals on stage.

“I’ve never felt that kind of rush before,” Reyes said. “I was honestly so nervous beforehand because I was worried about messing up or not being entertaining enough, but once I got out there, all of that completely went away and the adrenaline kicked in. It was the best feeling in the world.”

The student performance center was crowded as everyone pushed to the doors. Eager students rushed to the front row with a packed house slowly filling in. The show was delayed by 10 minutes and anticipation continued to mount.

In the meantime, there were playbills to look through, which inspired a few chuckles from the audience before the show even started. The cover graced us with Alaina’s photoshopped face onto Annie’s body, the inside was printed upside down, and the cast members were displayed by their baby photos.

The show began with “Hard Knock Life,” which featured a full dance routine. The effort the troupe put in could be seen throughout the show, from choreography, singing, props, and outfits.

“We all loved the idea of doing some sort of musical because we like to incorporate music into our sketches,” Girlie member Lily McCormick, a sophomore VMA student, said. “We needed something with a lot of characters and eventually someone suggested we do Annie but call it “Alaina” and we all thought it was a great idea.”

McCormick portrayed three characters: an orphan girl, the radio show host, and President Franklin D. Roosevelt. She wore a pink nightgown throughout the entire show for the orphan role, and spiced it up with a brown blazer to play the host and FDR.

A noteworthy part of the show were the voices each performer had for different characters. McCormick shifted from an exaggerated little girl voice, to a fast talking man, to finally, a slow talking, chair-ridden old man who perfected the voice of a grandpa.

Katie Kendrick, a sophomore theater and performance major, who played Alaina’s dog Sandy, may not have spoken any actual words, but she did blow the audience away with the hilarious dog-sounding noises she made. Besides being an orphan in the beginning, Kendrick played Sandy for the remainder of the show, crawling across the stage and captivating the audience.

Macy Martinez played Mr. Boardbucks’ secretary Grace Farrell satirically well. Her character used a smooth, yet dramatic voice. Each member played off of each other well but especially Martinez with Reyes. Interactions between them were exemplified through Martinez’s voice and Reyes’ facial expressions, like when Martinez gestured to Reyes and said, “What about this child over there?” in an intriguing way.

Junior design tech major Dom Letterli, who played Lily St. Regis, was comical with every word spoken from their mouth. In fact, even their scenes with no dialogue spoke volumes.

The random, dramatic kiss between them and Ana Jukic was a knee slapper, and the crowd could barely contain their laughter when Letterli yelled, “Oh my god, transition!” after the stage went dark at the end of a scene.

And don’t forget the end of “Hard Knock Life” when everyone was throwing blankets over Reyes who was in an Emerson move-in cart, and Letterli said, “I’m trying to help you Alaina!”

As they wheeled her into the wings of the stage the bin hit the wall, causing an accidental comedic effect.

It’s difficult to pick a favorite song the group performed. “NYC” and “Never Fully Dressed Without A Smile” were high energy moments featuring most, if not all, of the members. Behind the singing voices of Daddy Boardbucks, Reyes, and Grace Farrell in “NYC,” the other cast members repeatedly ran across the stage, emulating the chaos and business of New York City. Somebody even fell and crawled off the stage at one point.

At the end, Reyes fell asleep on Daddy Boardbucks’ shoulder with Grammer patting her head and singing the song in an exaggerated, deep voice.

However, the softer renditions of “Maybe” and “Tomorrow” were equally as enthralling. The songs were both sung before and after the five minute intermission. Overall, there’s no surprise the show received a standing ovation at the end. As multiple characters even said, “That’s our Annie—I mean Alaina.”

Girlie President Isabella Bertram, who portrayed Miss Hannigan, entertained the audience with her stage presence each time her character entered a scene. Nobody else could pull off Miss Hannigan better than her. She had flair, she had the look, and she gave flavor to the character.

This isn’t the first time Bertram has utilized music for Girlie shows, according to Reyes.

“Isabella has said that music is always incorporated into Girlie shows somehow—her exact words were ‘I don’t remember the last time I did a show where there wasn’t a musical number,’” said Reyes. “This show was very on brand for the troupe.”

McCormick, who has been a part of Girlie for two semesters, hopes to keep the tradition of doing a musical themed show going. The ability to perform on stage, something she has always loved, was alluring to her.

“An average meeting usually consists of all of us sharing sketches and pitching sketch ideas to each other, and our shows consist of us performing those very sketches,” McCormick said. “It’s so satisfying to finally put on a show we’ve all been working on for a while and have an audience think it’s just as funny as we do.”

Although she’s only been a part of the troupe for a month, Reyes already feels the bond between the close-knit group.

“It’s pretty much just like an established friend group that hangs out and writes jokes together,” Reyes said. “If you came to see ‘Alaina,’ the vibes are exactly the same.”

The Girlie Project has another sketch show on Dec. 9, and plans to record video sketches for their YouTube in the meantime.

“We also can be spontaneous sometimes so who knows?” McCormick said. “Maybe we’ll do another musical as well! Anything can happen for us Girlies.”