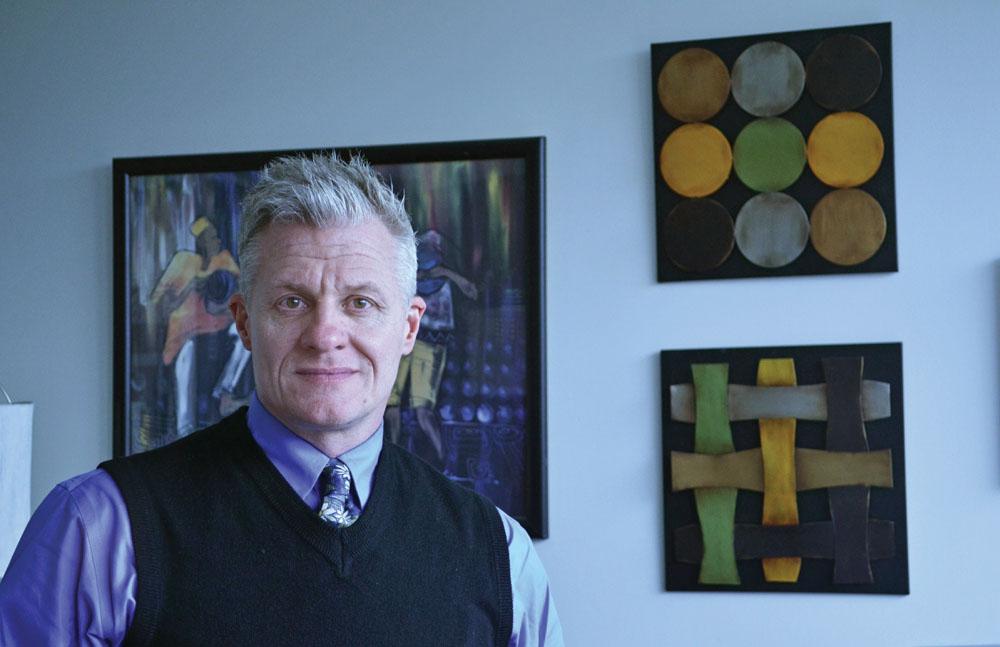 Richard West’s office is in a quiet corner of the communication studies department, but looking at paintings from the Dominican Republic and Mexican masks among plenty of photos and academic papers in the room, one can tell that West is nothing but.

“These stuffed animals came from Africa, these little masks here came from Mexico. When I went to Italy I got that star there. Those pink things are from China. I guess I have about six countries in my office artwork,” the chair of the communication studies department said. “At Emerson, one of the things in this department we really try to commit to is making sure we move into directions that are more international in nature.”

As president of the National Communication Association (NCA), a global organization of over 8,000 communication professionals, West will be able to do just that. Elected to the position by association members in January, West is the first faculty member at Emerson to become president.

His leadership through the international platform, he said, will bring attention to the school of communication and enhance the college’s academic profile.

Throughout his career, West said he has always waited for big opportunities to present themselves. He said being raised in a small house in Illinois with four other siblings, taught him the value of self composure.

“I grew up with a family with five kids and one bathroom, so I had no choice but to be patient in my life. So while many people may think, ‘Oh you better hurry up and run for this,’ I can be patient,” West said.

Despite his patience, West, 50, is one of the youngest to fill the presidential role of the association. His age, West said, places him in a position to understand the views of older communication scholars, while embracing newer ways of thinking about the field.

Among West’s initial goals for the organization, he said, are to interest more students, obtain more exposure in different media outlets, and increase diversity in the communication field.

“Our faculty across the country are overwhelmingly white, they are overwhelmingly male, although our students are overwhelmingly female,” West said. “We need to figure out how to bridge this disconnect. We have very few people of color who have won awards in our association. We have not one officer nor one member of the executive committee who is non-Caucasian. NCA is a global organization; our representation should be global.”

West’s career has always focused around academia. After obtaining a bachelor’s degree from Illinois State University in speech communication, West became a teacher.

“I was a high school teacher for one year, and I didn’t want to write bathroom passes and chaperone junior proms, so I realized that was not going to last.”

West taught for four years at the University of Northern Iowa after receiving his master’s degree in communication studies from Iowa State University. He coached a speech and debate team at the college, and when his team placed fourth at nationals, West said he decided it was time for him to move on, and went to Ohio University to get his PhD. West’s dissertation advisor, he said, was president of the organization and the World Communication Association.

“It was a mentorship that encouraged me to run for national office in the field,” West said. “That career trajectory, as I look at it, fell in place naturally instead of strategically. It just made sense … for me to have an opportunity to move into a national profile.”

According to its website, NCA members represent over 20 different countries. The organization is dedicated to the scholarly research of communication studies as well as promoting the importance of communication in all aspects of human life.

Nancy Kidd, executive director of the NCA, said West has presented a commitment to the organization for decades and has played a significant role in the association’s growth.

“As the primary program planner for NCA’s 2011 annual convention in New Orleans, Rich was instrumental in developing a stimulating intellectual and professional program for over 5,000 attendees,” Kidd said in an email. “His chosen theme for the 2011 convention, ‘voice,’ reflects his strong focus on ensuring that the diverse perspectives that together form our discipline are heard and valued.”

Vice President for Academic Affairs Linda Moore, who has also served on the executive committee of the NCA, said having West as president of the organization brings renown credibility to Emerson.

“NCA is the premiere organization for communication scholars in the U.S.,” Moore said. “The visibility that Rich has as president of that organization is extremely important when people are considering where they might tell students where to go to school or grad school. It lends credibility to Emerson as an organization and institution of higher education that Rich is here during the time that he is president.”

West said the connections Emerson has with the NCA will surely develop, and that he is thankful for the support of faculty and students that helped him reach the presidential role.

“There have been less than 100 presidents of the NCA,” West said. “The fact that we have a seat at that legacy table is really kind of a comment on the support the faculty and administration have given me throughout these years. Behind every NCA officer is a phenomenal faculty and a motivation because of the students.”