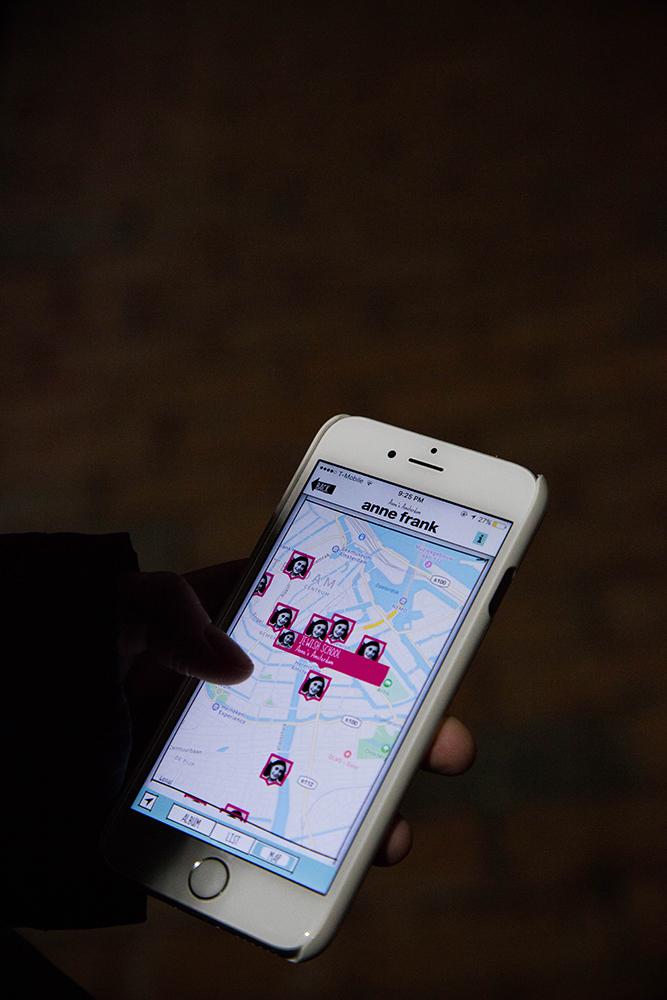 I am standing in the gift shop of the Anne Frank House in Amsterdam, head slightly cocked, puzzling over the cover of a book. It is The Diary of a Young Girl, the revered diary of Anne herself. A small seal in the corner reads: “Now available as an app!”  Contemptuously, I wonder: what could this app contain? A game version of Anne’s time in the annex where you try to stay hidden from Nazis for as long as possible? A virtual reality tour of the house, now available from the comfort of your sofa? I consult the meter-high poster of Anne to my left, but she yields no answers.

Unlike most historical figures, Anne Frank is easily accessible to children. We grow up idolizing her, dreaming of being her friend, but with that idolatry comes a sort of distance. The image we have of her comes from a single tome and photographs curated by her father. Her former house is full of video-taped interviews and glass display cases that move visitors along quickly. These gimmicks make it easy to forget that she died in a concentration camp at age 15.  Her life is sterilized, censored, and commodified.

The Anne Frank House is a perfect example of how, by diluting the past, we also strip it of any complexity. This is problematic because we so often look to the past for appropriate responses to current day issues. Dozens of recent articles have drawn parallels between Anne Frank and refugees abroad today—Anne’s family, like so many others during World War II, might have been spared had countries like the United States and Great Britain opened their borders.

But when the referenced historical event is itself a trivialized oddity, it becomes hard to grasp the gravity of a situation. Events that are already taking place an ocean away seem even less real because they are so similar to the subjects depicted in tourist hotspots around the globe. We have come to view journalism as a diversion, and real people as icons and martyrs.

Beyond this sterilization, we also see a blatant commodification of history in the production of memorabilia and misuse of “donated” money. The Anne Frank House, for instance, is run by the Anne Frank Foundation.  All revenue from admissions fees and gift shop purchases go to this foundation, which also holds the rights to Anne’s name; one might assume that the funds are used to preserve the house. However, the Foundation was involved in a lawsuit in the mid ’90s with the Anne Frank Fund—a Swiss organization founded by Otto Frank that operates separately from the Foundation—in which the Foundation was accused of “commercialization of Anne Frank’s legacy.”  Further, the Foundation took in over €14 million in admissions fees and related revenue (such as the gift shop) in 2015.  It is unclear whether these funds benefit the house or simply pay the Foundation’s very busy lawyers. As recently as 2013, these competing charities have been engaged in legal disputes over Anne’s legacy.

We see this same issue when Donald Trump signed an executive order calling for a “great rebuilding of the Armed forces.”  This order is expected to cost up to an additional $90 billion a year, despite the fact that US military spending is already far and away is the highest in the world.  Though national defense has far higher stakes than historical preservation, the attitude with which we approach these policies is founded in our commercialized understanding of world events of the past. This executive order demonstrates a sort of reactionary spending that we have come to understand and trust, even when—as in the case of Anne Frank’s legacy—there is little evidence that our funds are going towards their intended use. Preemptive measures become seen as impossible; the cycle of apathetic distancing from global issues via monetary influence becomes even more difficult to break.

Distancing ourselves from horrors that occur daily, by any means possible, is incredibly tempting. But we must both acknowledge what is really going on in the world, and actively participate in the solutions: by reading news (and perhaps, more importantly, fact-checking our sources); by writing meaningfully about what is going on and supporting journalists who do so; and by attending protests and giving time to organizations who are desperately understaffed. And of course, we can give money to reputable nonprofits who fund people to do these very things. (Within a capitalist system, money can solve problems, when properly directed.) Passivity is a lesson learned in gift shops, but it is a dangerous idea to perpetuate.

But back in Holland, I still find myself wanting to demonstrate that I am an active participant in history. After making a snarky comment about how “everything is for sale” (“Well, it’s a gift shop,” my companion replied), I dutifully picked out a glossy postcard of Anne’s face and took it to the register. The cashier expertly bagged the smiling girl and sent me on my way, like so many tourists before me. I feel vaguely guilty, but also feel the need to prove that I’m doing something worthwhile.