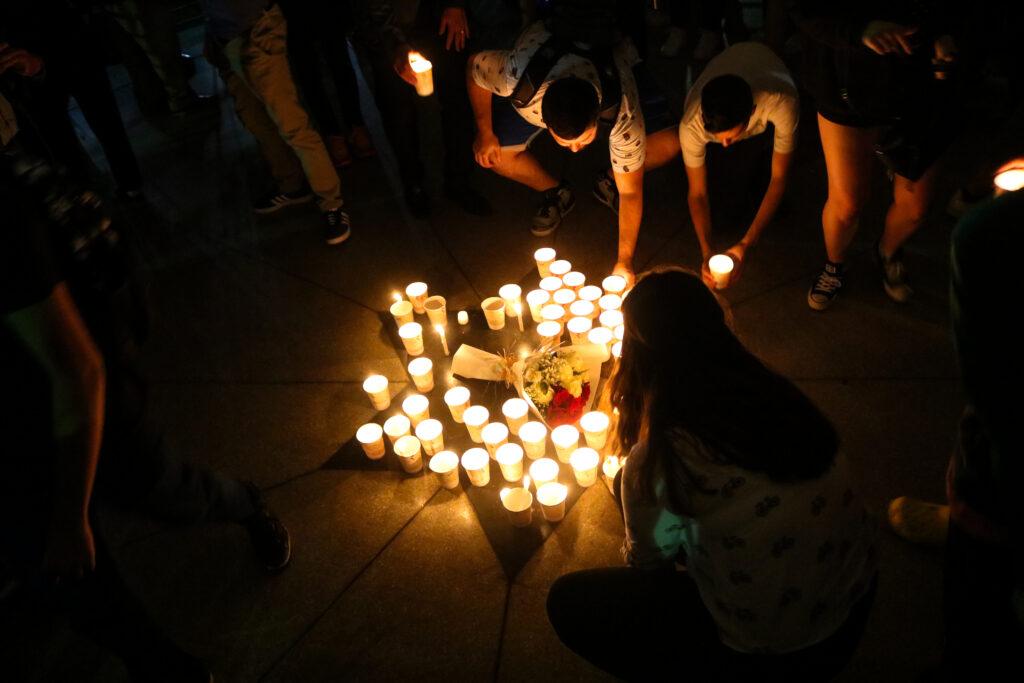 When he was two years old, sophomore Vaughn Coleman lost his father and uncle in the terrorist attacks on Sept. 11, 2001—an event he remembers every year.

“We’ll never forget because I think about my dad and uncle every single day,” he said an interview. “My dad was a normal person going to work, then things changed.”

Coleman, along with approximately 100 people, gathered on Wednesday night in Boston Common for the nineteenth annual Emerson College 9/11 Candlelight Vigil, mourning the lives lost in the attacks.

After speaking to the crowd, Coleman then played “Where The Streets Have No Name” by U2 as everyone placed their candles in the center of the bandstand. The song, Coleman said, was significant to his father, who played it during his birth.

As candles flickered around a bouquet of flowers, Coleman asked the crowd to hug the people around them—a tradition he learned while attending a camp for children that had lost loved ones from 9/11.

Communications Studies Chair Dr. Gregory Payne organized the first event in 2001 and continues to host it every year.

“People really needed to find a place to sit and think and reflect, because people were not really sure what was happening,” said Payne in an interview with The Beacon. “Ever since that time we’ve always had that vigil to commemorate what happened.”

“It was a horrendous, tragic, and senseless event, but it brought our nation together,” Pelton said to the gathered crowd. “We are here today both to remember and keep that memory alive.”

Payne also said the shootings in Ohio and Texas added a deeper meaning to the event, where people can mourn the lives lost to terror.

The speakers passed the microphone around to allow anyone to speak.

Sonia Tita Puopolo ’96 said her mother passed away during 9/11. She has been an organizer of the college’s event ever since she wrote a book after the event recounting her mother’s passing, called “Sonia’s Ring”

“Tonight’s turnout was really phenomenal—the message of love and hope is key,” Puopolo said in an interview. “Even in the terrible darkness, there is light.”