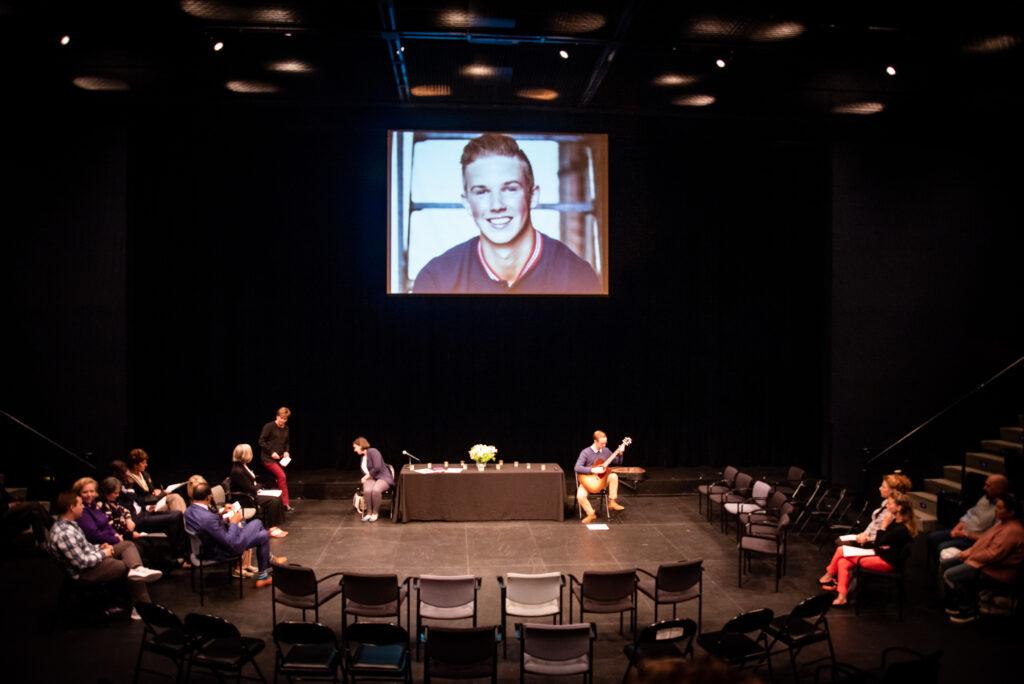 Updated 10/3/19: The article was updated to include a statement from Boston Mayor Marty Walsh

Community members filled the Semel Theater on Thursday wearing muted colors and athletic sweatshirts to mourn the death of sophomore Daniel Hollis at a vigil.

“The only shame about Dan is that not enough people knew who he was,” sophomore Jared Haines said to reporters before the vigil. “As soon as you started talking to him, he had a smile on his face and always just brightened up your day.”

Hollis died on Wednesday afternoon after receiving life-threatening head injuries at 1:30 a.m. Saturday in an encounter that the Boston Police Department later ruled a homicide.

“I hope so much that it was what people needed,” Avis Rogers said after the vigil. “When we’re in grief like we’re in right now, everyone needs something different.”

The college recorded a video of the vigil to send to Hollis’ family. Pelton spoke in part about the family’s generosity in his speech.

“It’s times like this that we realize that our commonwealth of learning is a student-centered community,” Pelton said in his speech. “Dan, like all of you, was here with a purpose, and that purpose was to become the person that he was meant to be. That journey for him has been cut short in a way that is dramatic, in a way that is heart-wrenching.”

In a post on caringbridge.org, Jen Kelly said Hollis’ family continues to be overwhelmed by the outpouring of love and well wishes from friends of Hollis and those who knew him. Hollis’ family did not attend the vigil.

“The vigil is intended for the Emerson community. We will not be attending, but be there in spirit as we continue to process our incredible loss,” the post read.

Kelly wrote that the family will hold services and a celebration for Hollis next weekend and will provide details as they become available.

“In the meantime, we know many of you are holding impromptu gatherings and sharing stories of Dan and his antics,” the post read. “We ask that you find comfort in one another and the happy memories.”

“There’s a pod of people who love Danny here, and there’s a comfort level of talking to someone who knew him rather than someone who knew of him,” Moxim said “The good news is if you spent eight minutes with him you knew who he was. There’s no difference between knowing him his whole life and meeting him one time in a coffee shop.”

James Hoppe, vice president and dean of campus life, attended the vigil and said the service was meant to serve as a time for members of the Emerson community to be together before a more formal memorial service.

“This is not the first time in my career I’ve worked with something like this,” Hoppe said in an interview. “It’s never easy. Everyone grieves in different ways so there’s no program that is going to be a universal salve to anybody, but the intent behind today is to give those who needed a time to be together to be together.”

In an emailed statement to The Beacon, Mayor Marty Walsh expressed his sympathies for Hollis’s family and friends.

After the vigil, attendees lined up in front of the altar below a picture of Hollis to write in a book to send to his family. They hugged and quietly spoke with one another as they waited.

Afterward, a few sat back down to continue their reflections.