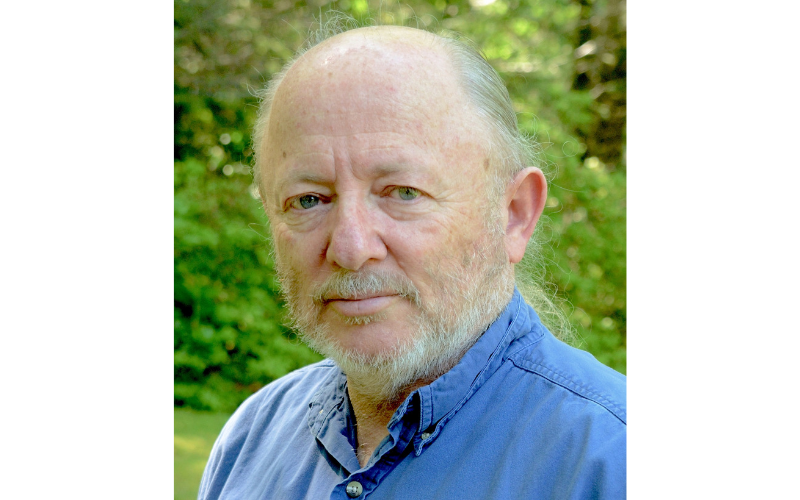 Jane Akiba clicked through pictures on her computer, her eyes sifting through the images of her children playing in fall leaves, sitting at the kitchen table, or getting dressed up for Halloween.

The photos are part of a series of books called, “Our Lives Together,” printed by her late husband, David Akiba. She said she believes her husband of 37 years took the pictures because his father died suddenly, and David wanted to preserve what he had.

“These kinds of moments, that we would just take on our phone, were printed [in a darkroom]  and organized, and they are just unbelievable,” she said.

Abigail Akiba, David’s youngest daughter and a senior at Emerson, said the collection helped her to understand her father’s artistry.

“There are hundreds of beautiful family photographs, [they’re] very artistic, raw, and real,” Abigail said. “When I saw my childhood through his artistic lenses, I started to realize how he looked at the world through his camera.”

Akiba, a photographer and longtime faculty member at the college, died on August 24, at 78 years old after battling cancer for almost a year. Akiba leaves behind his wife Jane, six children, and eleven grandchildren.

“David was an exceptionally talented photographer, artist, and professor,” President M. Lee Pelton said in an emailed comment to the Beacon. “Our commonwealth of learning has lost one of its great citizens. He will be sorely missed.”

He began teaching photography classes at the college in 1993 and retired 25 years later in 2018. He was diagnosed with cancer in the fall after his retirement.

His work appears in collections of the Boston Museum of Fine Arts, the Library of Congress, the Harvard Fogg Art Museum, the Brooklyn Art Museum, and the Boston Public Library among other venues, according to his website.

While at Emerson, Akiba also helped create the Affiliated Faculty of Emerson College, American Association of University Professors, a union for adjunct professors.

“This was unbelievably unprecedented,” Shaw said.

President Pelton recalled negotiating with Akiba on the new contract for faculty.

“He was brilliant and tactical,” he said. “But he was also humane and a great listener. He was a treasure.”

Jane, a senior affiliated faculty member in the Visual and Media Arts Department, said her husband had an incredible amount of confidence in his work. She said this allowed him to pursue his career while raising six children.

“I think being an artist is the most disciplined life—he was a very committed father and husband, loving, listening, and caring,” she said. “He didn’t wait for inspiration, he didn’t wait until he felt like going to work, he just went. He was an artist with a bodywork that scans forty-five years.”

Abigail attended Jewish private school growing up, where most students’ parents were doctors or lawyers. She said she never told her classmates that her father was an artist. Instead, she started the conversation by telling them he was a professor.

But as Abigail matured, she said she began to understand and appreciate his work.

“Now I show his art to as many people as I can, and I call him an artist now,” she said.

Lauren Shaw, a professor in the Visual and Media Arts department, met Akiba 48 years ago in graduate school at the Rhode Island School of Design. She came to Emerson in 1972 and recommended that the college hire him when her first opportunity to bring on an adjunct professor arose.

“He was my first choice—he was a master at composition and his respect for [film photography] was fundamental,” she said. “Later in his career, he did digital, but his passion was the darkroom.”

Shaw described Akiba as a commanding teacher with a devoted following of students.

“If you walked into his classroom during a critique, you could hear a pin drop — when he spoke, everyone listened,” she said. “I teach juniors and seniors, so I know when I have students, they are well trained by my colleagues—but when I got a David Akiba student, I knew they were perfect.”

In an anecdote on his website titled, “A Simple Sense of Delight,” Akiba explained why after building a darkroom in his childhood bedroom, photography continued to fascinate him decades later.

“Intent and chance may link up, and the fusion of the two creates surprising and thrilling results,” he wrote. “It is the thrill that keeps me going out with the camera and returning in haste to develop the negatives.”

Abigail described her father as well-read and intelligent, someone who always had an answer for her questions.

“You could talk to him about sports in one conversation and then you could be talking about philosophy and religion,” she said. “You wouldn’t notice him when he walked into a room, but once you start talking to him, you would think, ‘Wow, this guy is extraordinary’.”

“Until he died, he was just trying to get up,” Ms. Akiba said. “He had incredible will.”