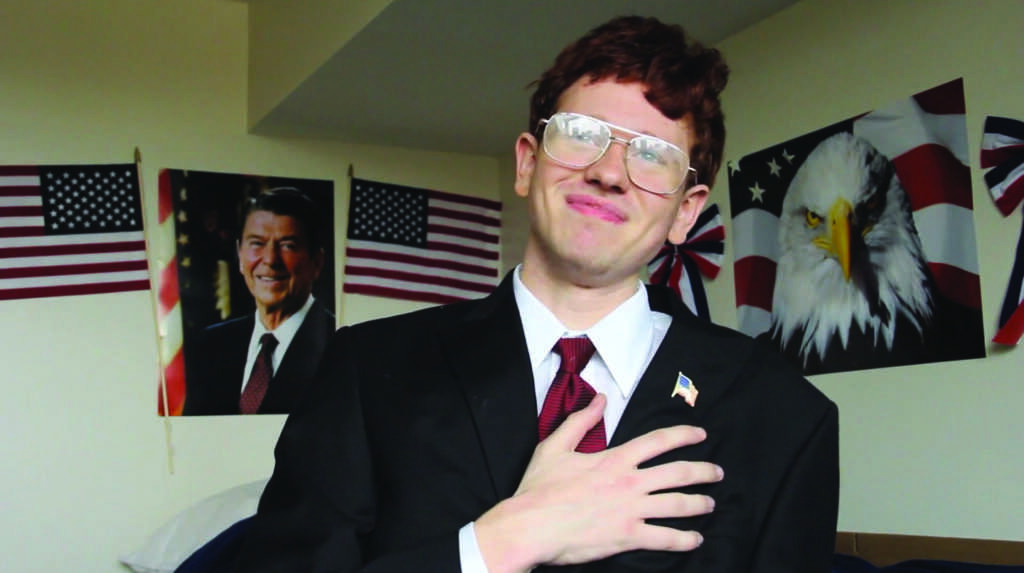 When Ricky Downes III first arrived on campus in the fall of 2011, one thought crossed his mind among the flurry of Beyoncé beats and rainbow-clad students on move-in day: what would my father think? Downes, now a junior visual and media arts major specializing in animation and writing for film and television, has taken that kernel of an idea and popped it into a home-grown television pilot for a show called Conservative Arts.

A political satire that’s part Colbert Report with a dash of Spongebob Squarepants’ manic humor, Conservative Arts takes its uber-Republican main character Ricky — played by and slightly based on Downes himself — and puts him on the Emerson College campus. The result is a skewering of both the out-of-touch Republicans so often maligned on late-night television, and the high eccentricities of a liberal arts atmosphere.

“I come from a very conservative family,” said Downes, particularly citing his dad, “so I said to myself: ‘what would it be like if we threw him into the most flamboyant, socially conscious place in the whole world — Emerson College.’”

The pilot, broken up into two 20-minute segments on YouTube, features a stock of stereotypical Emerson archetypes: the feminist, the hipster, and even the seemingly out-of -place jock, and pits them against Ricky, the daffy, American flag-worshipping protagonist.

Amos Stillwell, a sophomore visual and media arts major, plays Blaine Perry, the stubborn and liberal foil to Downes’ crazy conservative. Stillwell, who said he also grew up in a mostly conservative house, delighted at the idea of a fish-out-of-water story in which the fish isn’t necessarily the character viewers will empathize with.

“It’s interesting seeing the school from this perspective,” said Stillwell of Downes’ Republican character offending nearly all cliques on the liberal arts campus.

And as the episode — which took roughly a month of weekends to shoot according to Downes — progressed, things quickly became even more off-kilter in this Emerson parody.

“It got more and more fun, and more insane as the episode filming went on,” said Stillwell. “It became nonsensical.”

The comedic gags on the show come fast, with a reliance on clever wordplay and puns. Sight gags have Downes wearing a shirt in one scene saying “HUGS $3,” a parody of the “Free Hugs” mantra. In another, he has a big white binder labeled “women.”

Downes wears many hats during production, including creator, head writer, director, and star. He was also in charge of raising funds for the project, which he said he did through online fundraising site Indiegogo. Of the $1,000 goal, Downes was able to accumulate $600 for the project. The rest came out-of-pocket from him and some members of the crew.

“It might have been too much of an undertaking,” said Downes of the experience.

But he also said he knew not to stress the little things.

“It was low-key because it was a comedy and not a piece of art,” said Downes. “We focused less on the technical aspects.”

Still, the affair became time-consuming for all involved.

“By the end of the third week, it was becoming weary,” said Willie Burnley, a sophomore writing, literature, and publishing major who had no acting experience prior to being cast.

Heading into a second season of three projected episodes for the semester, the crew said it hopes to become more efficient.

“It’s going to be a challenge to keep balancing it,” said Burnley. “But I definitely want to see how much I can contribute.”

Cast members Burnley and Stillwell would even like to confer ideas and scripts, given the chance.

“There are some people who want a part of it,” said Burnley. “But right now, it’s Ricky’s baby and I respect that.”

Stillwell agreed, although he hopes to broaden the show’s appeal beyond Emerson students for its second batch of episodes.

“I want to make it more accessible for everyone going forward,” said Stillwell. “It’s hard for someone like my uncle to get the show.”

Going forward, Downes said he wants to overestimate how long it’s going to take, so he’s not caught off guard. The entire budget for the second season will be approximately $2,500, according to Downes, who said he hopes to start filming by the end of September. In the meantime, DVD copies are on the horizon to garner new fans and re-engage those who already saw it at a screening he held last April in the multi-purpose room, he said.

In the future, it’s going to be up to Downes to deliver on the promise of new scripts and episodes. Both money and timing will  prove pivotal, according to him.

“This isn’t for class. This is something the crew won’t put on their resume,” said Downes. “It’s to make something for fun that’s funny.”