Corey in command for Lions’ rotation 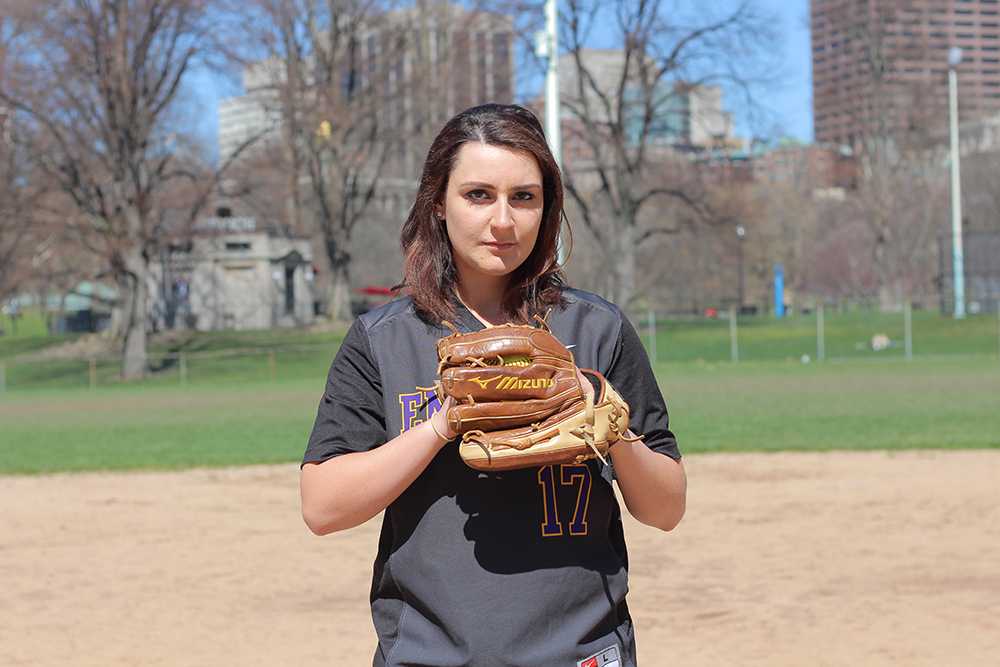 In the midst of her senior year on the diamond, Emerson softball pitcher Samantha Corey proves why the name on the front of your jersey means a whole lot more that the one on the back.

Corey has endured all the highs and lows of college life. The Londonderry, New Hampshire, native began her collegiate softball career with two seasons at Philadelphia University, but with playing time scarce and home more than five and half hours away, she said change was inevitable. So, after those two years, Corey transferred to Massachusetts College of Art and Design, where she now majors in fashion design.

When Emerson softball head coach Phil McElroy found out Corey was transferring, Corey said he reached out to her.

Corey is a product of the NCAA-approved consortium between Emerson, Berklee College of Music, and Massachusetts College of Art and Design.

Corey said not attending Emerson makes it difficult for her to form the bonds she would like to with her teammates.

“Sometimes I feel like I don’t have quite the connection with the girls,” Corey said. “Sometimes I do feel a little left out in terms of activities and such.”

On the field, you would never know Corey doesn’t attend Emerson—she plays with as much intensity as anyone, according to catcher Kallista Leonardos.

“When I catch for her I try and get her to lighten up a bit, because she definitely does take it very seriously,” Leonardos, a freshman journalism major, said. “I love the emotion she has, and it shows that she cares about the team and wanting to win.”

As the only senior pitcher on McElroy’s roster, it was a given that Corey was going to get the ball to begin the Lions’ campaign for the second straight season, according to McElroy. Corey said it was an honor to lay the groundwork for the rest of the rotation.

“You’re the one who is going out there and setting an example for the team and how we’re going to do,” Corey said.

During the Lions’ season-opening win against Emmanuel College in Clermont, Florida, Corey threw a complete game, allowing just five hits en route to a 3-1 win. McElroy said her outing was a direct result of her offseason commitment.

“She worked really hard in the month of February getting ready for the beginning of March,” McElroy said. “She was hitting her spots. She put the ball in spots where defenders could make plays.”

In the Lions’ 6-3 victory over the Cardinals, Corey hurled her third complete game, working out of jam after jam resulting in her second win of the season.

“I thought that would be a tough game for us and that we would need to have a spectacular seven innings to in order to do it,” McElroy said. “She really held it together in that game.”

Being the oldest on the pitching staff, Corey has shouldered a majority of the load on the mound for the Lions this season.

Corey has pitched 91 1/3 innings this season—14 more than the Lions’ three other pitchers combined. That number also ranks third in the New England Women’s and Men’s Athletic Conference, while her 63 strikeouts and five wins rank third and eighth, respectively.

McElroy said there is one clear message he wants his younger arms to learn from Corey.

“I want them to take away how hard Sam works at it and her drive and passion for wanting to be the best more than anything else,” McElroy said. “In any sport and any form of athletics you have to give up something from a social standpoint at times to be the best.”

The softball team travels to Babson College on April 15 for a doubleheader against their NEWMAC rival, with the first game starting at 3 p.m.