COVID-19 at Emerson: The Story So Far 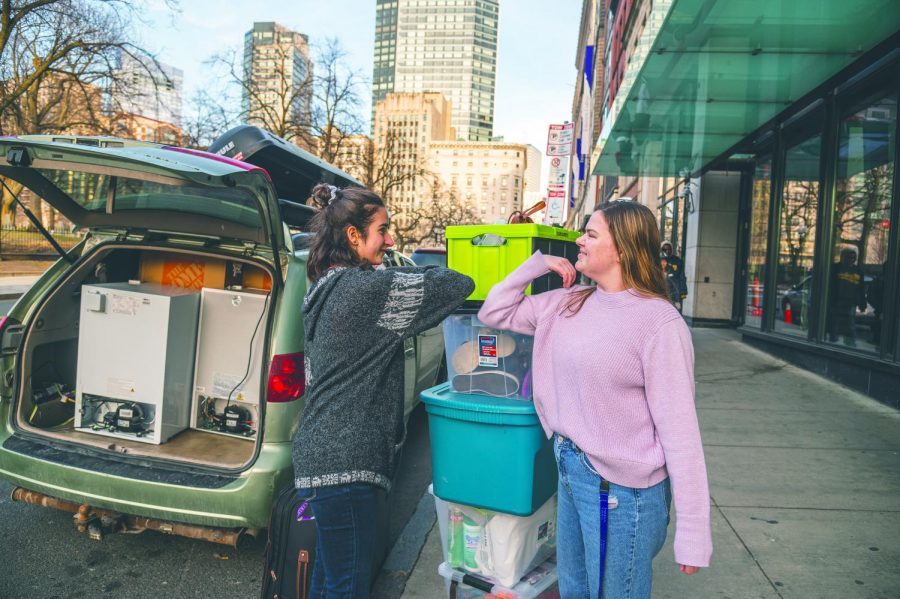 Students moving out of their dorms in March 2020

The action at Emerson, a college with roughly 4,000 students, left community members scrambling to find ways to transition classes online, adjust to new guidelines from the state and city regulating businesses and nightlife, and move out by March 20. The timeline of the past week shows the extent to which officials, both inside and outside of the college, have gone to curb the outbreak of COVID-19.

The story of a weeklong series of changes started with President M. Lee Pelton announcing on March 10 that all college classes would transition to online instruction with a weeklong break for professors and students to adjust to the new medium. Only hours before, Gov. Charlie Baker declared a state of emergency in Massachusetts. The college plans to use a video-conferencing service, Zoom, to conduct all classes, and the IT department confirmed on March 14 that students and faculty would have access to Zoom Pro, which can hold presentations for up to 100 attendees.

Although Pelton initially gave students the option to either stay in the campus’s residence halls or return home, on March 13, he officially announced the closure of all residential operations. Students are required to vacate both the Boston and Los Angeles campuses by March 20.  Exemptions will be provided for international students and those with “special circumstances,” according to Pelton’s statement; students unable to leave campus had to complete a form for extended housing by March 16.

Many students expressed fear, frustration, and anxiety surrounding the quick turnaround with which they are expected to pack up their rooms and travel home while considering travel restrictions and familial quarantines.

Cases of COVID-19 continue to rise in Massachusetts, with 197 confirmed cases in the state and 36 in Suffolk County, where Emerson is located, as of Monday, according to the Department of Public Health. A total of 1092 individuals have been tested, according to the same data.

No Emerson College students have been confirmed positive for the virus to date.

In Boston, Mayor Martin Walsh declared a public health emergency in a press conference on March 15 in an effort to receive more aid from the state and federal governments to combat the virus and its effects. The city and state governments, looking to impose restrictions on nightlife, moved to order an 11 p.m. mandated closure for all restaurants, bars, and clubs starting March 15. The businesses are also mandated to transition to takeout-only in an attempt to curb crowds.

As a result of these regulations, Emerson’s dining facilities have responded by shifting to offering only pre-packaged meals for students starting March 17. This will replace sit-down meals, and the Dining Center will open from 8 a.m. to 6 p.m. The Max Cafe’s hours will be adjusted to 11 a.m. to 12 a.m., and its grille will no longer be serving prepared food. The Paramount Cafe, the Lion’s Den, and the Backstage Cafe have all closed.

Many Emerson facilities and resources will stay active in varying capacities.

Emerson Counseling and Psychological Services, the Social Justice Center, and Academic Advising Center will continue meeting with students virtually or over the phone, while the 172 Tremont Campus Center and the Iwasaki Library will remain open with modified hours. Both the housing selection process and fall class registration have been delayed, and decisions for resident assistant positions have been postponed.

As of March 13, the Student Government Association is proceeding via online communication for the remainder of the semester, including the Annual Budget Request process and elections.

Many Emerson traditions and programs have been forced to cancel due to student travel and broader restrictions.

The 39th Annual EVVY Awards canceled both their Gala and Majestic Awards Show, though they still plan to announce nominees and winners online. The WEBN television station, WECB radio station, ArtsEmerson, and the Bright Lights film series have all ceased programming for the remainder of the semester. The WERS radio station plans to continue service with professional staff replacing student hosts.

In the Boston area and across the Commonwealth at large, steps are quickly being taken to slow the spread of the virus putting Emerson students at risk. Gov. Baker banned gatherings of more than 25 people in Massachusetts until April 17, though the White House has recommended gatherings exceed no more than 10 people. The MBTA also announced reduced service for buses and trains starting March 17.

Baker also launched a COVID-19 command center, which gathers experts to work toward expanding lab capacity testing, planning quarantine operations, and other duties. The center will have access to state funds, including a $15 million aid package approved by the State Legislature.

Since testing protocols have become more flexible, clinicians have more individual discretion on who to test, and while more national and state labs are gaining approval to conduct tests, the number of tests conducted in the state is expected to increase in the coming days.

Across state lines, Marlboro College has announced plans to move classes online and shut down their dorms. Since the college is currently on spring break, students have likely spent their last days on its campus before its planned alliance with Emerson takes effect in the fall.