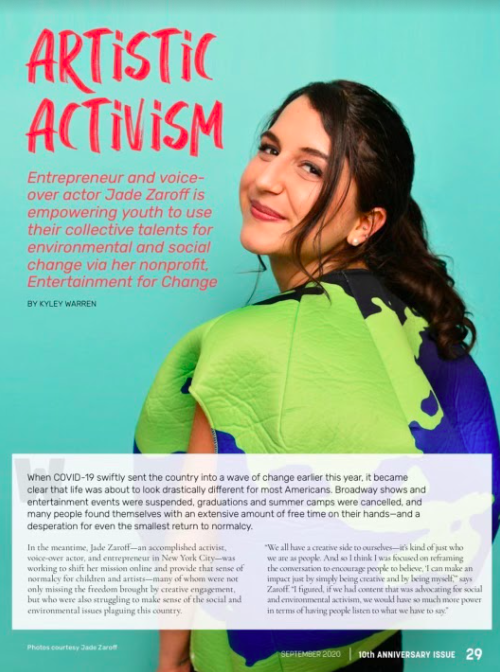 The impact of art is vast and intentional artistic expression is incredibly influential to today’s youth.

Emerson alum Jade Zaroff ‘16 has committed herself and her career to providing a space for artists, specifically youth, to create true change and make a difference in the world.

Zaroff expressed that her time at Emerson was valuable and formative to finding her path and integrating her passions to create her nonprofit, Entertainment for Change. The organization seeks to provide a space for young artists to express themselves and their art to create social change and fight for a sustainable future.

“I really credit Emerson to be a lot of the foundation and the inspiration for where Entertainment for Change is now,” said Zaroff.

Zaroff attended Emerson as a performing arts major with a minor in entrepreneurship, and found her passion through the entrepreneurship program. Zaroff was also an eco-representative who worked on campus educating others about environmental awareness.

Her love for impact art began to take shape when she pitched the idea for the Emerson Green Gala, a celebration for Earth Day that consolidated various student groups at Emerson in order to showcase differing forms of artistic expression.

“During the Emerson Green Gala, I was in the entrepreneurship minor, and the trajectory of the minor is to create a business plan,” Zaroff said. “I just loved the idea of using art to make change.”

Entertainment for Change has grown since its inception during Zaroff’s time at Emerson.

“Where it stands now is educating, empowering, and co-creating with the next generation of impact artists,” said Zaroff.

In the face of the pandemic, things got complicated for Zaroff and the nonprofit, but she took advantage of the time and flexibility it gave her. Zaroff has now created an entire impact arts and activist based curriculum, which she hopes to implement in camps, schools, and communities.

“I’m a huge believer of being so open to pivoting and open to what that can bring,” said Zaroff. “The classes ended up becoming the curriculum. I never thought I’d have a 100 page curriculum. That really informed the next step of where we’re going.”

From discussions surrounding authenticity within art, life, and the nonprofit, to the importance of purpose, it is clear that Zaroff has such passion for what she does. Using art to create change and leave a mark on the world is her main prerogative.

“I wake up and genuinely love it so much—it fuels me,” said Zaroff.

Zaroff also spoke on the importance of intentionality, stating that the people who have proved most influential to her have been intentional in what they do. She said that a good portion of the curriculum looks at intentionality.

While Zaroff looks forward to the future and all that it entails for her and the nonprofit, she still finds pieces of Emerson in the core of her work. She spoke of how Emerson students have multifaceted passions, and how there is beauty in tapping into these different pieces of themselves.

“The work I do is so purpose-driven for me, and I’ve really figured out how to combine a lot of my passions into one thing,” Zaroff said. “Speaking on behalf of what is beneficial to both the individual and to the world, merged with art and using art as the method of communication, merged with youth.”

Zaroff said individuals should use their art in a way that fuels them and the world around them.

“Being an impact artist is owning your creative expression to make an impact on one person,” Zaroff said. “The more that people can do that in their day to day, the more it will make the world feel better.”