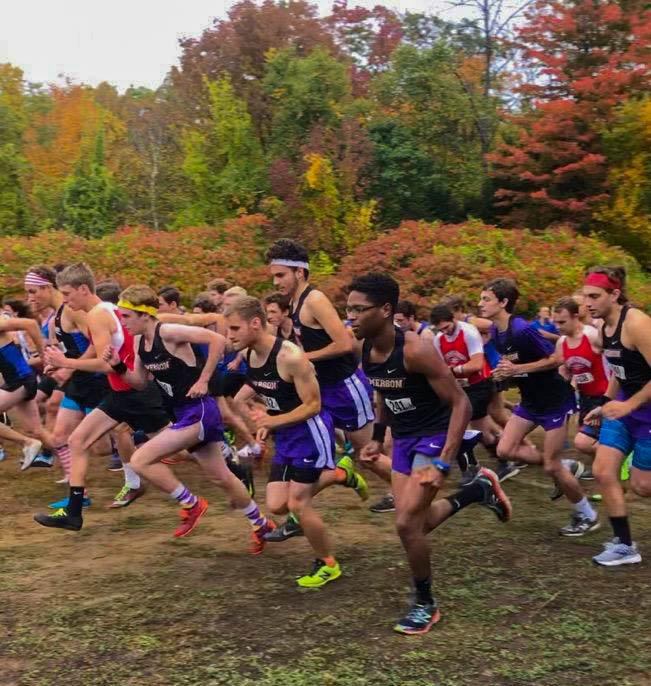 The cross country teams will race in the Suffolk Invitational on Saturday. Photo courtesy of the Cross Country team.

Three meets into the season, the men’s and women’s cross country teams are looking ahead to its most important races of the season at the Suffolk Invitational and the New England Women’s and Men’s Athletic Conference Championship.

First-year head coach Brandon Fox ‘11 said he circled Saturday’s Suffolk Invitational on his calendar at the beginning of the season.

“I think the fact that it’s at Franklin Park and it’s home—it’s really our home course even though we don’t typically host—that’s what makes this meet special,” Fox said in an interview. “Usually we have the administrators coming in, a lot of family support around us, and it’s also a course that we look back on every year and say, ‘Okay, we know what we can do here.’ There’s not a lot of courses in New England where you can compare times directly, so comparing apples to apples each year and looking at that progression, I always circle Franklin Park.”

The teams will use the Suffolk Invitational to evaluate themselves ahead of the NEWMAC championship on Nov. 3. Fox said he hopes both teams are able to succeed this Saturday.

“I want to be in the middle of the pack on both sides,” Fox said. “There’s going to be a lot of teams there, a lot of competition. We’re sort of right in the mix—it’s a sort of dogfight with a lot of teams that are of our size and our capability—so all those points matter. We’ve got to go in with the right attitude, and I think if we do that we’ll be pretty successful and we’ll see some [personal records].”

“Last year was [Suffolk University’s] first year of being competitive in a very long time because they got a track team, which helps out their cross country team,” MacNeil said in an interview. “They got a ton of really fast kids and they killed us last year because we were probably having one of the worst years ever in this program’s history, so it was kind of embarrassing. Now we’re a little bit better and we can compete with them a bit more.”

Two weeks later, both the men’s and women’s teams placed fourth out of eight teams at the Pop Crowell Invitational. Glass once again led the men, placing sixth of 88 runners and setting a personal record of 28:45. Ranney finished in tenth with a time of 25:39 to lead the women.

Glass said the team is using each meet as a stepping stone to prepare for the upcoming challenges at the end of the season.

“I think we’re doing better, we’re improving with every meet,” Glass said in an interview. “The idea is to gear up to run the best at the important meets at the end of the season, and I think that’s what we’re doing so far.”

The teams competed in their third meet of the season this past Saturday at the Runnin’ Monks Invitational in Standish, Maine. Out of the eight teams competing, the men’s team finished in fifth and the women’s team came in fourth. Glass earned a time of 29:17.6 as the 19th of 83 runners to cross the finish line. Ranney placed ninth out of 93 runners with a time of 26:00.5.

“This past Saturday was probably the most excited I’ve ever been as a coach,” Fox said. “Seeing my team succeed is the best thing in the world, and that’s a testament to the amount of work they put in.”

Following the Suffolk Invitational, the cross country teams will prepare for the NEWMAC Championship on Nov. 3 at Franklin Park.

Junior Maddie Lynch believes the race is an opportunity for the program to redefine itself within the conference.

“Historically, Emerson has been the bottom of the NEWMAC for cross country, so if we could move up in that placement that’d be awesome,” Lynch said in an interview. “It’s at Franklin Park, so we’ll have a second chance on that course which will be good, so I feel like hitting our fastest times and also moving up in the rankings with NEWMAC would be great.”

Fox said Emerson will face a difficult challenge going into the conference championship.

“Since we’ve moved into this conference, it has just been an absolute nightmare running against some of these teams—MIT hasn’t lost a championship in two decades,” Fox said. “I don’t look forward to this meet every year for that reason because we’re not well-positioned to run against these teams, but we need to pick the apples we can reach.”

However, Fox believes his teams have what it takes to compete with the contenders in the conference.