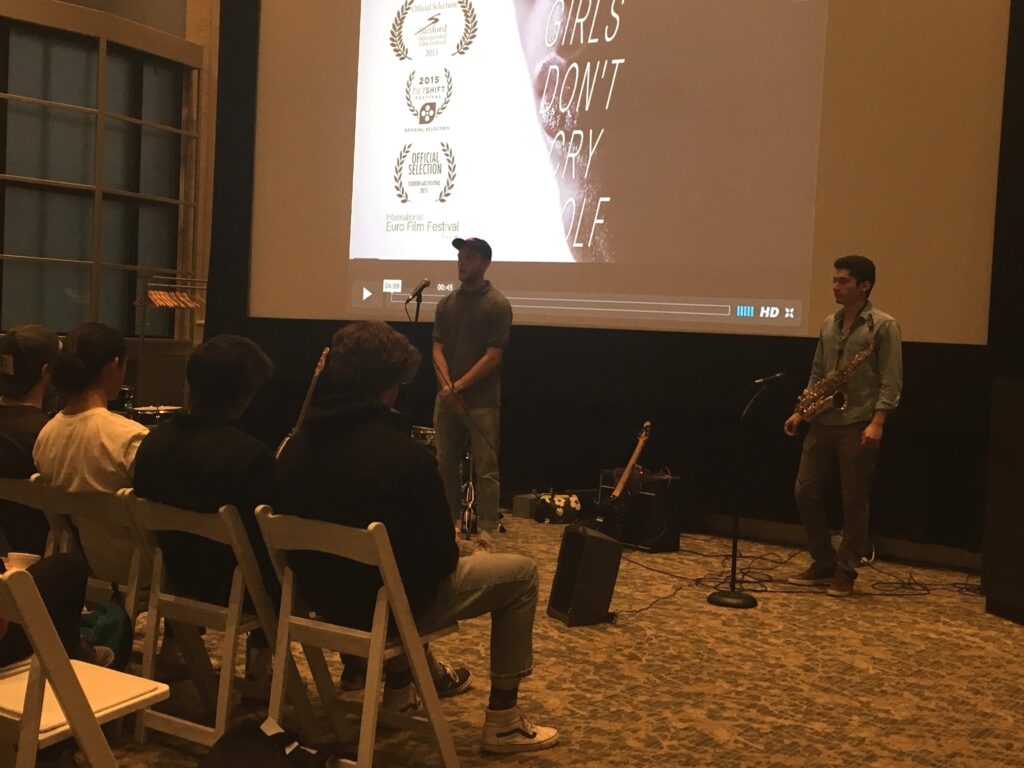 On Sunday night, the smell of pizza, tacos, and beans wafted through the Bill Bordy Theater. In the air hung the last note from Josiah Seet’s guitar, a remnant of his Southeast Asian-influenced piece.

And so went each performer at Emerson International’s Rhythms of the World event. The event included 11 performances spanning a wide range of artforms—poetry, rap, singing, drumming, and cinematography, to name a few. When introduced, the artist’s home region was named to emphasize the culture that influenced their piece.

Despite being held annually over the last two years, this was the showcase’s first time in the Bordy Theater. The food was also a new addition, complementing the diversity of the performers.

The president of Emerson International, Sakshi Bathija, a senior marketing communications major, said the goal was to create a fun, celebratory atmosphere for sharing skills and traditions.

“It’s nice to watch people and get a sense of everyone’s culture,” Bathija said. “Emerson does have a diverse community, and we need to have something to showcase everyone’s talents [while including] some things from back home.”

Connor Abeles, a junior performing arts major and rapper known as Cab Ellis, was one of the performers. His song, “As We Proceed (A Note From the Universe),” featured Berklee College of Music saxophonist Fernando Ferrarone.

“I settled upon the idea of connecting the dots, that we’re all just specks in the grand scheme, but if we’re able to connect with each other, it grows into this bigger thing,” Abeles said. “I brought Fernando [Ferrarone] on as my kind of double. I think he acts as my mind in this because he kind of riffs on what I’m saying.”

Ferrarone, a junior performance student, comes from a Latino background and community in Miami, Florida. He said he’s studying jazz at Berklee because of the familiar sounds he grew up with.

Apurupa Balasubramanyam, a junior visual and media arts major, sang “Samjhawan” from the Bollywood film Humpty Sharma Ki Dulhania. Balasubramanyam is the founder of Desi, Emerson’s first South Asian organization, and was co-host of the showcase. She said she’s always wanted to perform at Rhythms of the World, but this was the first year she was able to come.

“It’s a chance to spread culture around,” Balasubramanyam said. “There was someone who was Japanese, someone was really influenced by Spanish [culture], and I sang in Hindi. If you have just one perspective in life, then you’re only thinking about things in one way.”

Christopher Streat, a sophomore performing arts major, said his favorite performance was Abeles and Ferrarone because of the combination of the spoken word and saxophone. Streat is the vice president of EBONI, Emerson’s organization for empowerment of students of color, and was a co-host of the showcase.

“I think [the event] is important because Emerson is so lacking in diversity,” Streat said. “It’s important to show, ‘Hey, we are here, we are recognizable also on this campus.’ I think it raises the opportunity to teach those who see it as a sort of monocultural type of school that there is a lot of diversity in front of you.”

The showcase fell five days after election day, when Donald Trump was declared the  President-elect. His win had a strong impact on the Emerson campus, with many students turning to art as a form of healing and protest.

“After everything that’s going on, I hope this is something that takes your mind off things, something fun, lighthearted,” Bathija said.